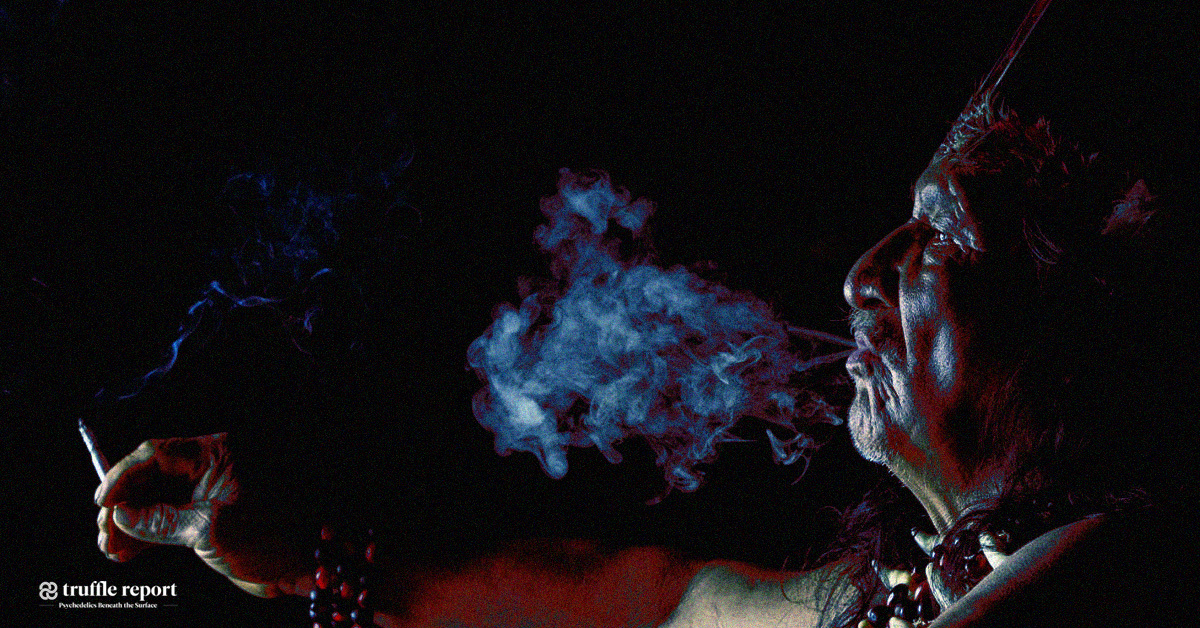 Many seekers of healing and spiritual growth in the western world are travelling to the Amazon to experience psychedelic plant medicines. While most these days seem to be looking for ayahuasca, tobacco holds a unique place among the most sacred and powerful plants of that region. It can be smoked, chewed, taken as a beverage, and inhaled as tobacco smoke for medicinal and religious purposes. Truffle Report looks into Mapacho, Rapé, and the tobacco rituals of native Amazonian peoples.

What is Mapacho? The Amazon’s Sacred Tobacco Spirit

In the Amazon, plant medicines, psychedelic or otherwise, form an important part of both cultural history and day-to-day-life. Nicotiana rustica, also known as Mapacho, Aztec Tobacco, and Wild Tobacco, is the natural local tobacco unique to the region, where it has been a part of indigenous religious and spiritual rituals of Amazonian people for centuries. It is believed that Mapacho is the original tobacco species which was brought from America to Europe. It contains up to nine times as much nicotine as its sister plant Nicotiana tabacum. According to Terence McKenna’s book Food of the Gods, Mapacho is a “much more potent, chemically complex, and potentially hallucinogenic” tobacco smoke compared to Nicotiana tabacum.

Mapacho is often used for its entheogenic purposes by shamans due to its high nicotine content and beta-carbolines, including the harmala alkaloids harman and norharman. These alkaloids are also found in the Amazonian plant Banisteriopsis caapi, one of the base ingredients in the ayahuasca brew. They are MAO-inhibitors that work with chemicals in the brain and increase levels of different types of neurotransmitters (serotonin, dopamine, tyramine, and norepinephrine) to stimulate the central nervous system. This stimulation proves that tobacco has antidepressant effects and helps to relieve mental and physical tensions, similar to other psychedelic drugs, such as psilocybin and ayahuasca.

Use and Effects of Sacred Tobacco in a Ceremonial Setting

Mapacho is used in the culture of indigenous tribes such as Shipibo-conibo, Ashaninka, Kichua, Kaxinawa, Nu-nu, Yawanawa and Katukina. These indigenous people ingest Mapacho in the form of a liquid infusion of tobacco juice, or through the medium of tobacco smoke. It is believed that the spirit of the plant has healing and protective qualities.

Nicotiana rustica is also a common ingredient in rapé, a powerful tobacco snuff used by shamans as a part of medicinal and spiritual rituals. It is pronounced ‘ha-peh’ in English but is also referred to as ‘hape,’ ‘hapi,’ or ‘rapay’ by Western culture. This snuff also consists of various Amazonian medicinal plants, trees, leaves and seeds, however, each tribe has its own recipe for the blend.

Traditionally, rapé is used with two different types of pipe, made from either bamboo or bone. The powdered snuff is either self-administered or blown into the nostrils by an experienced shaman, which is preferable. Because it is administered nasally, the effects are rapid and intense. According to Chakra Openings , “You always blow into the left nostril first to represent a metaphorical death, and then into the right nostril to represent rebirth.”

Mapacho and rapé have numerous purported benefits, and their uses include:

If rapé is used in conjunction with other practices, such as a Kambo or ayahuasca ceremony, it is said to also help detoxify the body, cleaning out toxins and bacteria. After the cleansing process, a sufferer may experience side effects, such as sweating, vomiting, and diarrhea.

This user commenting on Reddit wrote, “The sensation in the nose is displeasurable and often causes tears to come down from the sensitivity of the area. But it very much shoots you down out of your head into your body. Sensations become more vivid, and the thoughts slow down much. Kind of feels warm like the body is blossoming but very earthy.”

The experience can last from a few minutes to several hours, or even days.

Mapacho in a Controlled Ritual Setting

Mapacho plays a major role as a powerful tool in shamanic ceremonies. It can be used in smoke, liquid, or snuff rituals. Curanderos Tabaqueros, or tobacco healers, among indigenous people use these various forms of tobacco to perform a direct physical and energetic cleanse. They will use the plant on its own, or in conjunction with other plant medicines. Skilled Tabaqueros know how to dose, administer, and intervene. Mapacho smoke is used by shaman to cleanse the negative energy from the sufferer, to protect, and to visualize or interpret messages from the tobacco spirit.

Another user on Reddit wrote, “Mapacho is a bridge manifesting intention from one world into another. Mapacho allows you to create reality. Your intentions when you sit with mapacho will manifest in the physical world. Mindfulness of this process is the relationship, and it grows. This is how curanderos heal with mapacho, by using that bridge to manifest healing intention in the body. Mapacho gives them command and mastery over that which they encounter in various worlds.”