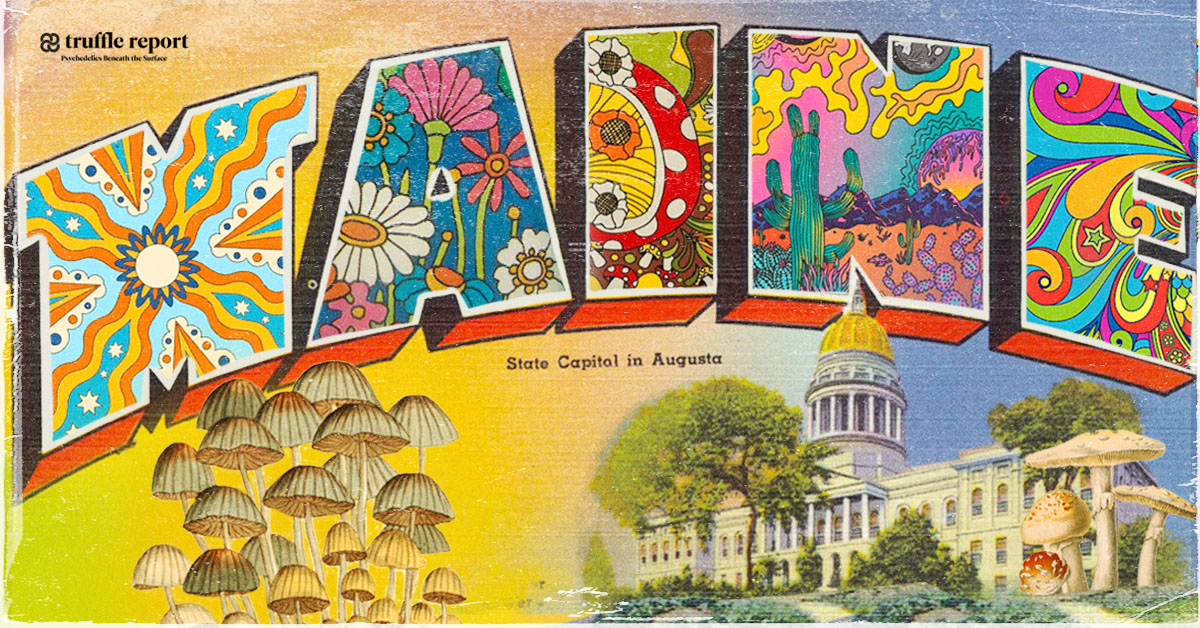 Lawmakers in the State of Maine have heard evidence in favour of and against a bill seeking to establish a regulatory framework for accessing psilocybin products in the state.

The bill, “An Act to Enact the Maine Psilocybin Services Act” (LD1582), went before the Joint Standing Committee on Health and Human Services on Tuesday.

This legislation was first introduced in the Senate on April 27, 2021, by Democratic Senator Donna Bailey. In July, it was carried over to the 2022 legislative session.

The bill would allow anyone aged 21 and older to purchase psilocybin — the primary psychoactive ingredient found in magic mushrooms — from a licensed retailer, and to consume it under the supervision of a state-approved psilocybin service practitioner.

LD1582 would appoint the Maine Psilocybin Advisory Board, similar to Oregon’s approach to creating a framework for access to psilocybin therapy. The board’s duties would include making recommendations to Maine’s Department of Health and Human Services related to “the available medical, psychological and scientific studies, research and other information on the safety and efficacy of psilocybin in treating behavioral health conditions, including but not limited to substance use disorder, depression, anxiety disorders, and end-of-life psychological distress.”

A person wanting to receive psilocybin services would not be required to have a medical diagnosis, health assessment, or be suffering from a particular medical condition, such as as a treatment for substance use disorder or severe depression.

The 40-page bill also details the board’s duties, board membership, product labeling and packaging requirements, advertising and marketing requirements, how psilocybin products would be taxed, and personal possession restrictions.

During the hearing on Tuesday, the bill’s sponsor, Senator Bailey, urged the committee to keep an open mind regarding the legislation. Citing psilocybin’s potential as an effective treatment for post-traumatic stress disorder and the limited efficacy of currently available prescription drugs, Senator Bailey said the committee had a duty to consider alternative treatments for mental health disorders.

Several members of the public provided testimony in favour of the bill, including Maine residents and veterans who spoke of their personal experiences using psilocybin, as well as medical and legal professionals.

BJ McCollister of public relations firm The Resurgam Group spoke in support of the bill, which he said would ensure those in the greatest need of psilocybin treatment could access these “lifesaving medicines”. However, he suggested several amendments to the bill, including allowing licensed psilocybin service providers to produce their own psilocybin and developing treatment options for patients unable to go to a psilocybin service center for medical reasons.

He also suggested that the bill create its own psilocybin packaging standards, instead of basing this off pre-existing standards for marijuana as the bill currently does.

Further, Dr. Sulak suggested that exemptions be made to the eligibility requirements for patients with a terminal diagnosis. “A 20-year-old with a terminal condition shouldn’t have to wait until their birthday to access this treatment,” he said.

Speaking against the bill, Maine Medical Association President Dr. Jeffrey Barkin urged lawmakers to hold off on the legislation until the results of ongoing clinical trials involving psychedelics were published. “We are open to new treatments, but we are not open to widespread legalization until the harms are known,” Dr. Barkin said.

Other concerns raised were about the regulatory framework set out in the bill promoting a recreational use model instead of a medical use model, and a lack of medical safeguards. It was also suggested that the bill should focus on naturally-occurring drugs (found in psychedelic plants) over synthetic drugs to reduce the potential for harm.

The bill will now go before lawmakers for further consideration in a Work Session.

Psilocybin mushrooms — also referred to as psychedelic mushrooms, or more commonly just shrooms — are currently an illegal drug in the state, as well as being a Schedule I Controlled Substance at the federal level. Possessing and using psilocybin in Maine is a Class D crime, meaning it is a felony punishable by jail time.

Maine is just the latest jurisdiction in the United States to consider decriminalizing psilocybin use, reducing the penalties from felony drug possession to civil violations. This comes off the back of research by leading academic institutions such as Johns Hopkins University about the drug’s positive impact in terms of addressing the physical effects and psychological effects associated with a range of debilitating disorders.