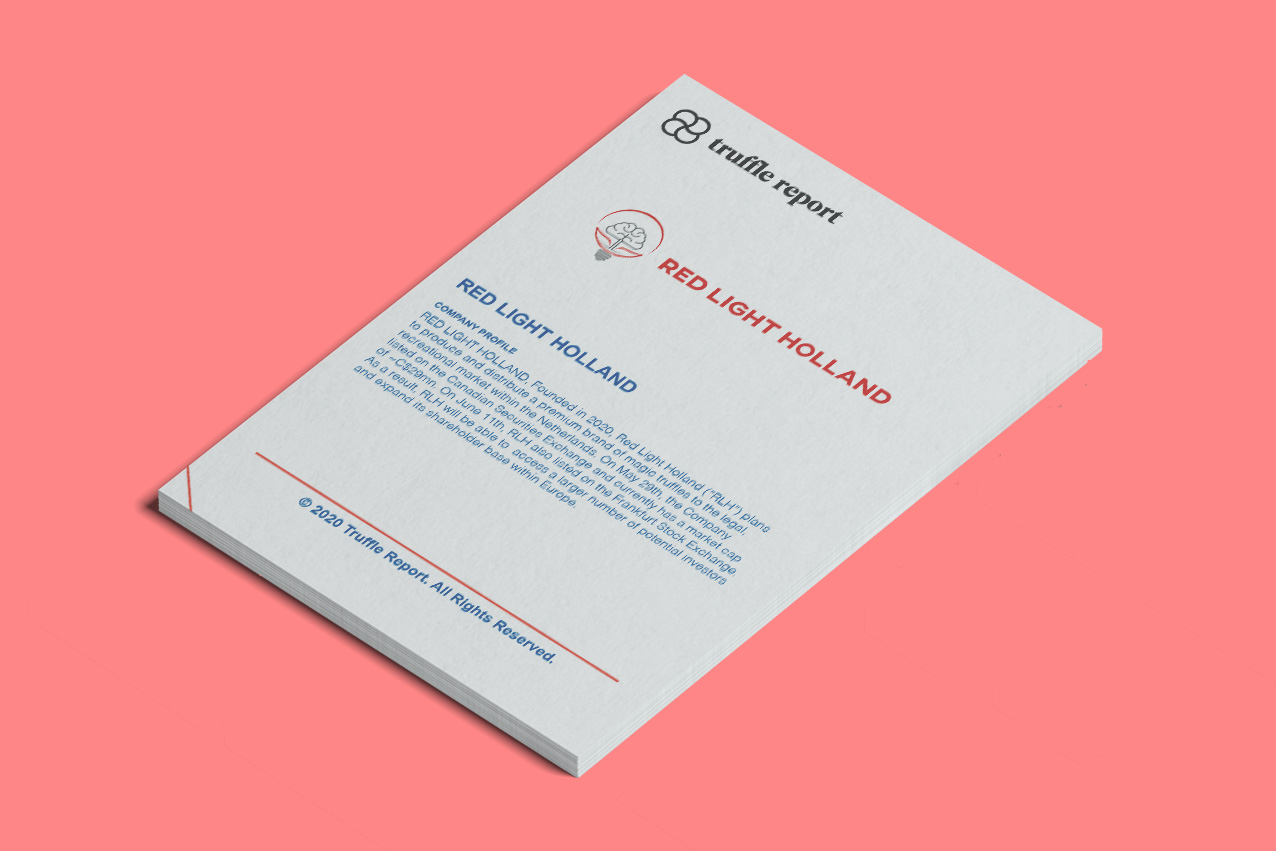 The latest listed psychedelics company on the block is Red Light Holland (“RLH”). RLH plans to produce and distribute a premium brand of magic truffles to the legal, recreational market within the Netherlands. On May 29th, the Company listed on the Canadian Securities Exchange and currently has a market cap of ~C$29mn. On June 11th, RLH also listed on the Frankfurt Stock Exchange. As a result, RLH will be able to access a larger number of potential investors and expand its shareholder base within Europe.

RLH has plans to construct a production facility, for which it hopes to secure an EU-GMP certification. If certified, RLH will also produce and supply medical grade, premium magic truffles within the Netherlands.

Even though the Company currently does not generate revenue (expected to begin by Q3 2020), it has sufficient cash reserves to fund its research and facility development. It recently closed a C$3mn private placement from an institutional investor, which will provide it enough money for working capital purposes.

RLH’s core business is the production and sale of magic truffles. Within this vertical, it currently offers two brands of premium products:

Red Light Health is aimed at supplementing its core business. Hence, this segment will supply the medical market, with naturally occurring, non-synthetic psilocybin. Currently, clinical trials are using a synthetic pro-drug compound for their research.

RLH hopes to explore the entourage effect of whole fungi medicine. This will establish RLH as a pioneering company capable of growing medical grade truffles. This could potentially help discover more about the entire psilocybin truffle.

RLH is currently constructing a C$1.2mn, 3,000 sqft indoor growing, production facility in Horst, the Netherlands. Once completed, the Facility will be capable of producing up to 10,000 kilograms of truffles per year. This facility will enable RLH to establish its production operations. Eventually, RLH will be able to independently grow and produce its own truffles for packaging and distribution under its brands.

RLH will focus on two distribution channels to distribute its products:

(i) through partnerships with Smart Shop Retailers

RLH is also exploring the possibility to set-up kiosk establishments in targeted retail locations (both leased and licensed) whose purpose will be solely to promote awareness of truffles and RLH’s brand and business.

It is important for investors to understand the regulatory environment under which RLH operates in the Netherlands.

The Opium Act is the primary drug legislation in the Netherlands. Article 2 and Article 3 of the Opium Act prohibit the possession, production, preparation, processing, selling, delivering, transporting, importing and exporting of any drug or substance listed on the schedules/lists accompanying the Act, as well as preparations containing one or more of such substances. Article 2 and Article 3 of the Opium Act also prohibit the above-noted activities in respect of a number of plants or parts of plants which are named in the Opium Act Lists.

However, these prohibitions do not relate to unlisted organic matter (and parts thereof). The Act does not prohibit the cultivation, production, and sale of fresh, unprocessed truffles, provided that (i) the truffles are not subject to further processing that results in the truffles becoming a preparation prohibited under the Opium Act, and (ii) the biomatter that is cultivated, produced, and sold as truffles has not progressed to a stage in growth where the biomatter has transitioned from sclerotia (truffles), to become a magic mushroom (paddo).

Numerous studies and anecdotal stories confirm the amazing medical and recreational benefits of magic truffles. RLH believes that there is presently a sizeable legal market for fresh, unprocessed truffles within the Netherlands. There is a promising prospect for a strong, legal recreational truffles industry to emerge over time, globally.

RLH’s business is in the early stages of development. Therefore, this means higher risk and potentially higher reward should it succeed. Over time, the truffles industry (and consumer perceptions thereof) will likely undergo a paradigm shift that is analogous to the change experienced by the cannabis industry, which resulted in the emergence of the global, multibillion-dollar industry.

While psychedelics have remained taboo for more than half a century, They are progressively emerging as potential alternative candidates for conventional therapies for individuals suffering from elusive maladies like post-traumatic stress disorder (“PTSD”), addiction, Alzheimer’s, and depression.

Though the legal market for fresh, unprocessed truffles is presently limited, globally, and in some jurisdictions (such as the City of Denver, State of Colorado, U.S.), the recent wave of deregulation and legalization of recreational cannabis across the globe will provide jurisdictions with the impetus to shift their focus to truffles.

Amid recent resurgence of interest in the study of psilocybin and psilocybin medicine, the approximately $15 billion-dollar global anti-depressant market presents a promising opportunity to capitalize on.

Disclaimer: The Author of this report certifies that: (1) He does not hold any equity position in the Company and (2) the views expressed in this report reflect his personal views about the subject matter discussed.