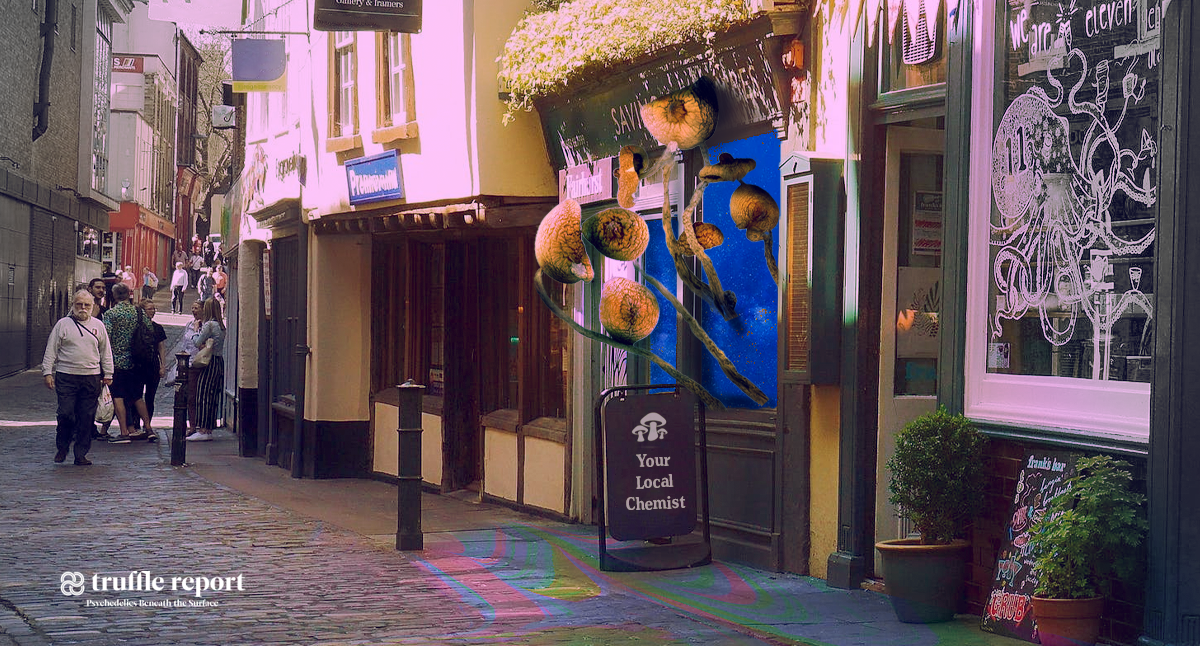 A few days back, I received a direct message from a reader on Instagram asking if there are any laws that protect psilocybin mushroom sellers who’ve been trading openly in Canada. The individual’s question was directly in the context of Dana Larsen’s magic mushroom dispensary in Vancouver which while “illegal, seems to be doing fine,” the Instagrammer mentioned.

To recap, Dana Larsen became the first individual in Canada to openly retail microdoses of pilocybin at his magic mushroom dispensary for therapeutic purposes in 2019, and has since been growing his venture.

If you’re following psychedelics, you’re probably wondering how this works.

The simple answer is that there are no laws that allow the trade of magic mushrooms, making this business something of an act of civil disobedience, much like Larsen’s early cannabis dispensary. Psilocybin, the primary psychoactive ingredient in magic mushrooms, is a Schedule III substance regulated under Canada’s Controlled Drugs and Substances Act.

Under existing laws, anyone found in possession of Schedule III psychedelic drugs will be “liable to imprisonment for a term not exceeding three years” with a fine of up to a thousand dollars on the first offence and up to two thousand dollars for a subsequent offence. This is not including specific exemptions granted by Health Canada.

However, activism on drug decriminalization — and emerging scientific evidence from clinical trials on the potential therapeutic benefits of psychedelic experience — are raising questions about the validity of this blanket prohibition.

While Medicinal Mushroom Dispensary was the first of its type to go online and then open storefront services to sell doses of psilocybin, there are now more stores and dispensary owners in Vancouver following its lead, dealing with magic mushrooms and psilocybin edibles.

Canadians in major cities will recall a similar phenomenon of grey-market cannabis dispensaries several years ago. While being of questionable legal status, these businesses were tolerated (off and on) and then prosecuted, then finally swept aside in waves of raids and shutdowns by law enforcement in favour of licensed retailers following cannabis legalization. This cycle now seems poised to repeat itself with psilocybin.

What is Driving the Expansion of Magic Mushroom Dispensaries?

Advocacy around psychedelics, and particularly the push toward medicalization of psilocybin mushrooms, has been growing stronger for the last three years. As 2021 marked the fifth year of the opioid overdose emergency in British Columbia, activists were seen distributing samples of clean drugs, including heroin and meth, as a act of protest against the existing drug laws. Larsen was one of them.

Meanwhile, British Columbia has also put forward a request asking the federal government for a province-wide exemption from criminal penalties for drug possession while Vancouver stands poised to become the first city in Canada to decriminalize possession of drugs. The city’s current avenue of approach seems to be to seek an exemption from Health Canada, similar to individual cases of terminal patients who have been allowed to access these illegal drugs under Section 56 of the CDSA to ease their psychological distress.

A positive response to dispensary products at the ground level has been contributing to the growth of Larsen’s psilocybin sales.

“A few months ago after we opened the storefront to expand access, we had such a positive response to the microdosing. Not a single negative reaction or anybody having a problem,” Larsen says. “We decided to start offering stronger dosages, restricted by medical need,” he says, responding to the success of storefront services.

Larsen has moved from only selling microdoses of psilocybin to higher doses with dried mushrooms and psilocybin edibles in chocolate form. He says that requirements to access the products remain the same. “We will provide microdoses to any adult over the age of 19 who promises to use them responsibly. The stronger products, the whole mushrooms and the mushroom chocolates, require some kind of medical diagnosis,” Larsen says.

There is ample research to back the medical potential of psilocybin products. Several studies and clinical trials from leading institutions such as Johns Hopkins and Imperial College London indicate that psychedelic therapy for mental health disorders such as end-of-life anxiety caused by a terminal diagnosis, not to mention more common conditions like post-traumatic stress disorder and obsessive-compulsive disorder, can have positive effects on patients.

However, selling larger doses is not without its own concerns, and he adds, “What I worry about is somebody’s not following our guidelines, being irresponsible in some way, and then hurting themselves or hurting someone else and that reflecting poorly on us.”

Psilocybin mushrooms are developing a reputation for efficacy in treating substance abuse disorders. A 2017 study published by Global Drug Survey claimed mushrooms to be “one of the safest drugs in the world”.

Larsen shared that he has a client base of at least 4,000 individuals at the moment, including some who sought mushrooms for their legally exempted psychedelic-assisted therapy. This has doubled since we last spoke, when he told Truffle Report that he was providing psychedelic medicines to about 2,000 Canadians.

However, the consumption pattern for psilocybin is different from cannabis use. “There’s less demand for mushrooms than there is for cannabis overall,” Larsen says. Any cannabis user might consume cannabis multiple times a day but even a heavy mushroom user wouldn’t typically dose more than once or twice a week. “Even that will be considered a lot. I think microdosing of substance will be something that’ll expand the most,” he says.

Larsen has also started to deal with other psychedelic drugs and substances that are “actually more legal than the mushrooms”, including microdoses of 1P-LSD.

The growing market and demand, however, shows that while the federal government may still be debating the decriminalization of substances, Canadians have chosen not to wait.

“I also want to see others joining in this movement. I don’t think I’m going to be able to monopolize the mushroom trade in Canada any more than I monopolized the marijuana trade,” Larsen says.