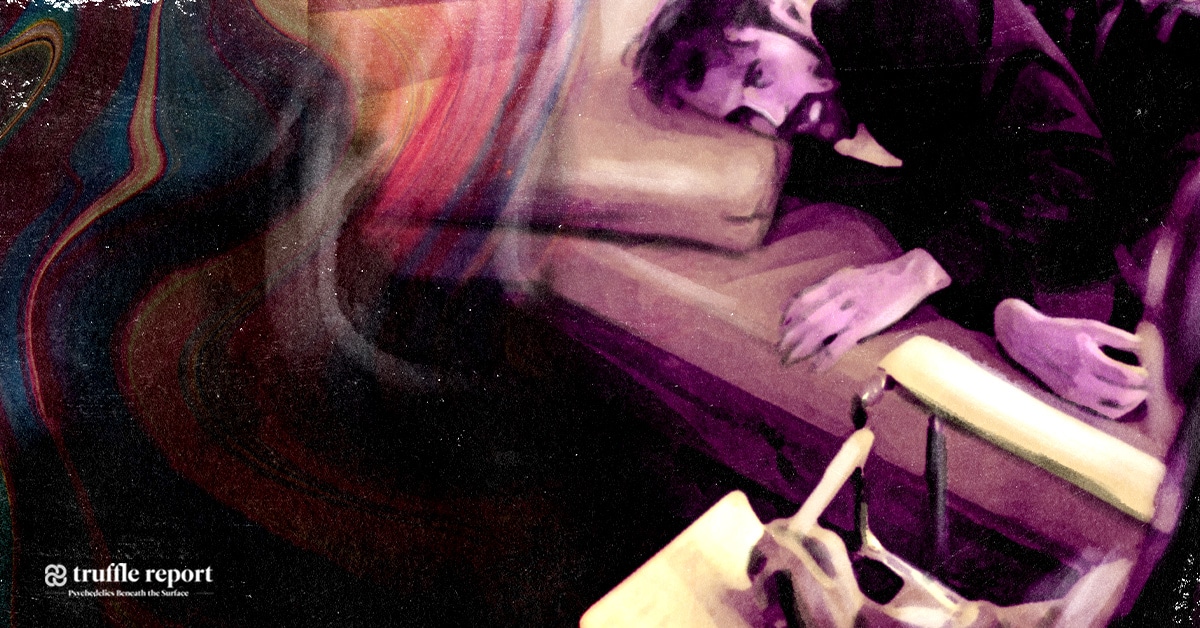 Last week, we began our series exploring the potential risks and benefits of ketamine therapy by following up with Flor Bollini of NANA heals. This week, we’ll be hearing from those within the space administering ketamine therapy in a clinical setting.

In speaking to clinicians, we looked to clarify their processes and see how they manage their treatment protocols to minimize the possibility of dependence or misuse.

Dr. Reid Robison, CMO of Novamind, says “I only use ketamine when we have a mental health-related diagnosis on record. We also do a thorough medical and psychiatric screening including reviewing pertinent factors such as personal or family history of psychosis and any history of substance abuse.”

Dr. Joe Flanders of Mindspace Wellbeing in Montreal tells Truffle that “for us, it’s really all about the psychotherapy. I don’t prescribe. I’m a psychologist, not an MD. We have a referring physician and a nurse as well, and between us, we administer a sublingual rapid-dissolve tablet. It’s straightforward, and less invasive than IV or IM [intravenous or intramuscular] protocols. My role is that of psychotherapy, and I think that’s really one of the more important protective mechanisms that guards against the danger of addiction.”

I asked whether either had encountered drug seekers throughout the course of their work, and how they responded to dependence, among other physical or psychological issues.

“I have encountered people who appear to be drug-seeking or to have troubled relationships with this medicine already,” Robison says. “It usually becomes apparent very early in our interactions. I should point out that of the thousands of people we’ve worked with through the ketamine-assisted psychotherapy process, only a tiny fraction end up misusing. In our experience, the benefits of ketamine have far outweighed the risks when you have the proper structure and support in place.”

“When someone comes in asking for a specific dose and frequency, that can be a red flag, particularly when it’s a take-home dose. I can tell you that I’ve worked with clients who have had abuse and dependence issues, but I’ve never had a client who we’ve done the appropriate process with who has entered into a troubled relationship with ketamine through the course of their treatment,” he continues.

Differing Approaches in the Clinic

“We do send ketamine home with a patient under the right circumstances,” Robison says, “but there has to be a known support person in place who we can talk to and can vet and work with and provide additional education to. The biggest factor is that we don’t prescribe daily ketamine. If we’re giving ketamine for home-dosing, it is because someone has responded well in the clinic, and we’re choosing to go down that road because they receive great benefit from it, they haven’t had problems, and we have an open dialogue with a caregiver who is known to us.”

MindSpace’s approach is more cautious, according to Flanders. “There are many different ways  you can put together a ketamine clinic. We’re very conservative. We don’t send ketamine home. It’s always administered. We see drugs as a tool that opens a door. The drugs aren’t the treatment. They allow people to go deep and make new connections, to feel safe and open. The impact really happens in the context of psychotherapy, taking that boost from that rapid antidepressant feature of the ketamine. It’s all in the service of a lasting impact.”

“Right now we are only treating treatment-resistant depression. We will screen out people who appear to be looking for a quick hit. Frankly, not many of them come to us. This is not the quick hit place to be. We’re doing transformative work,” Flanders says, adding that the screening process before a patient is administered ketamine is lengthy.

Robison clarifies that Novamind offers “psychedelic, psycholytic, and psychiatric” modes of ketamine therapy. “Psychedelic therapy is in-office with a medium to high dose, eyeshades, and headphones,” he explains. “The psycholytic method is taking a supervised dose in the office prior to a therapy session. Psychiatric modes use ketamine or Spravato for its pharmacologic properties as a rapid-antidepressant or anti-suicidality agent. If someone is in crisis, we can administer ketamine. If someone has completed a course of ketamine therapy in-office, they may come in for maintenance doses, and on occasion, we do send it home under those right circumstances.”

“With at-home use, we have frequent visits with the prescriber, usually monthly, and give a limited dose and quantity so that it can’t become a chemical dependency problem. In theory, someone could still misuse it, but we aren’t giving very much at a time, and we have safety nets in place.”

All of this begged the question, even without physical dependency, at what point does a person lean too hard into ketamine therapy? At what point would the therapist or physician wean a patient off of treatment because of potential misuse issues?

Flanders’ answer is straightforward. “They come to us for three dosing sessions. That’s it. I do have a client who did some ketamine as a research participant, and was then like ‘when can we go again?’ Because we’re doing it in the context of psychotherapy, we have the relationship and the trust, and we’re able to talk about this idea of the drug as a quick fix. We don’t have a lot of those people, but we have worked with those who get excited about the possibility, and then don’t take the psychotherapy as seriously. Then the effects wear off and they want to go back to the drug.”

Robison is more specific about the risks for patients of ketamine as a take-home prescription. “For example, I worked with one patient doing ketamine-assisted therapy and it was extremely beneficial for their depression. I also knew the patient’s spouse, who had been involved in the treatment. We transitioned into the home-dosing phase, and one day I got a call from the spouse voicing concerns about how their partner was using ketamine — they would take it at higher than prescribed doses and then end up completing earlier than planned. Because I had proper consent to talk to the spouse, there was an open invitation for them to reach out with any concerns. I brought them both in for a follow-up visit and we discussed the situation openly. These kinds of checks and balances have been an absolute requirement for us to have established if we’re going to send someone home with ketamine.”

Flanders adds, “I see our model as analogous to surgery. We go deep, do this intense thing for a short period of time. We extract from or repair the wound, and then you go on with your life. We don’t see this as a long-term antidepressant medication.”