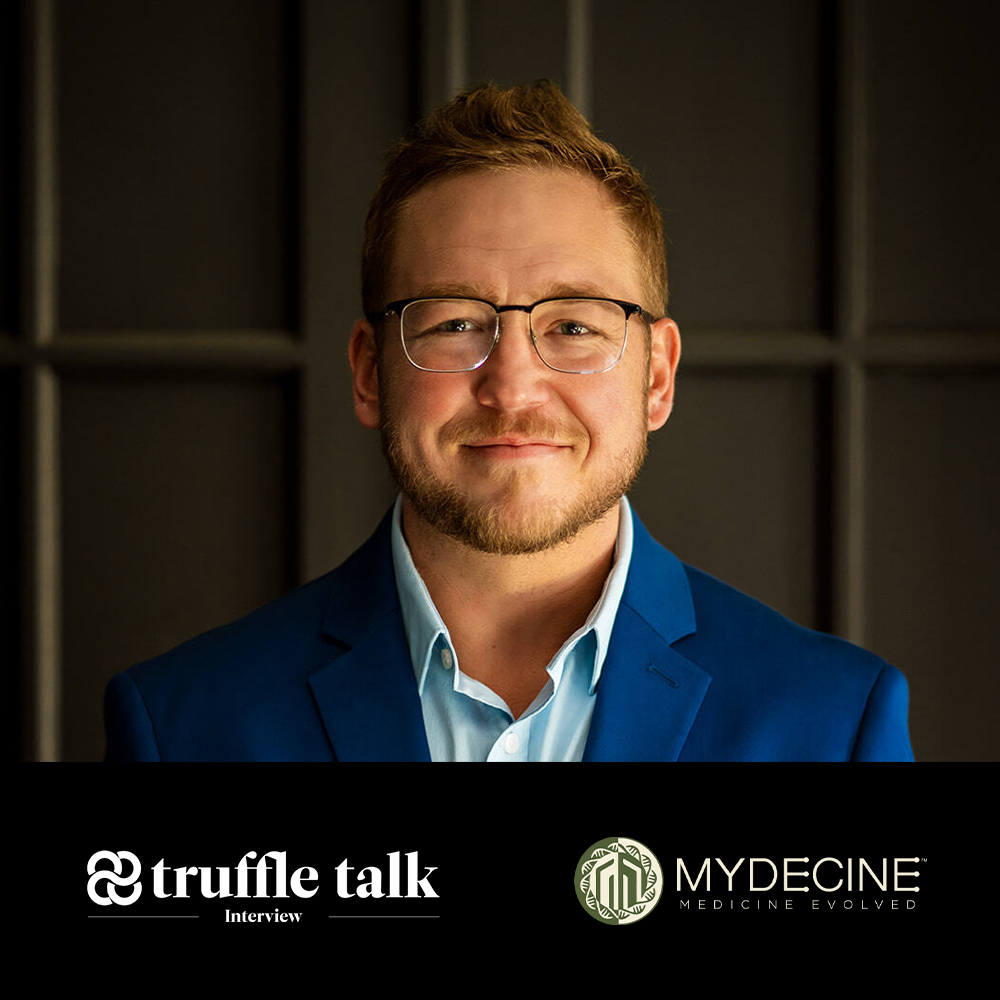 At a time when he was looking for the next big industry, entrepreneur Joshua Bartch was attracted to the world of fungi by its unique compounds. “Diversification is incredibly important. With fungi, you can pursue oil remediation, break down plastic, and solve a lot of the world’s problems,” Bartch tells Truffle Report.

Along with geneticist Robert Roscow and hemp consultant Damon Michaels, Bartch co-founded biotechnology and life sciences company Mydecine Innovations Group to develop psychedelic-assisted therapies. “Our focus is the unique compounds that can promote health and wellness, and psychedelic compounds that can address unmet needs in the mental health arena,” Bartch says of the Colorado-based company.

Prior to becoming the CEO of Mydecine, Bartch had worked in the cannabis industry in Denver, Colorado starting in 2009. When recreational cannabis was legalized in the state in 2014, he launched Cannabase, a technology platform that connected standalone cultivators and retailers which was acquired 16 months later by Helix GCS. After selling significant professional and private cannabis-related assets, Bartch moved into mergers and acquisitions (M&A) and investing which ultimately led him to the psychedelics space.

Bartch tells Truffle Report that Mydecine’s lead program is focused on the use of psilocybin and psilocybin-like compounds in conjunction with strict psychotherapy protocols for the treatment of post-traumatic stress disorder (PTSD), particularly among veteran populations. “In the United States alone, a veteran commits suicide every 72 minutes. That’s over 22 a day,” Bartch says.

“For whatever reasons, there’s been complacency with the current treatment models that maybe work half the time for half the population. Currently, there is not a single pharmaceutical drug that is manufactured for PTSD. Everything is borrowed, off-label, such as selective serotonin reuptake inhibitors (SSRIs) and Prozac which are incredibly dangerous drugs and are really ineffective for the treatment of PTSD because they carry side effects like suicide.”

Bartch says Mydecine has been working off a body of evidence from the 1950s and 60s which showed one to three macrodoses of psilocybin treatments, accompanied by strict psychotherapy protocols, had a success rate in excess of 75 percent in eliminating PTSD. “What is exciting for us is we are dealing with very ineffective band-aids that carry incredible negative side effects and we are able to replace it was a non-addictive, non-invasive treatment that has no known long-term side effects and can essentially act as a cure with one to three treatments combined with psychotherapy protocols,” he says.

Mydecine is ready to conduct Phase 2A clinical trials revolving around the use of psilocybin to treat PTSD, however, the trials have been put on hold due to COVID-19. “We have approved test sites at Leiden University in the Netherlands, the University of Western Ontario and the University of Alberta in Canada, and we are about to announce three very prominent veterans-focused sites in the United States,” Bartch says. He adds that the trial is expected to begin in the next few months once restrictions around COVID-19 allow it to proceed. “We don’t want to start the trial and then have to stop. To stop and restart could be very expensive and from a pure data standpoint is not the best,” he says.

Bartch says Mydecine’s exclusive access to a full cGMP pharmaceutical manufacturing facility at the University of Alberta was one way the company differentiated itself from others in the psychedelics space. “We have the ability to go from A to Z and turn a concept into reality,” Bartch tells Truffle Report. “Through the University of Alberta, which is covered by a Health Canada dealer’s licence, we have the ability to cultivate, extract, and isolate compounds which we can sell commercially. We can provide that active pharmaceutical ingredient (API) for our clinical trials to drastically lower the cost of our API or leverage our ability to produce these compounds, which can be used on humans, to participate in other studies we think are interesting or hold potential. To leverage that in exchange for shared data is advantageous.”

He adds that Mydecine supports the work of organizations exploring the medical potential of psychedelics in a responsible manner, such as through the passage of Measure 109 in Oregon. While Mydecine cannot take part in this state-based program itself, Bartch says the company supported the cause because it believes public acceptance of psychedelics is a significant barrier. “We don’t support the recreational use of psychedelics in any instance at all because we think it is a completely different substance to THC and it holds a higher medical potential to change the way mental health is being treated. Anything that is done responsibly that will better educate the public we think is a great thing for the industry,” he says.

Bartch tells Truffle Report he expects the first of the three new listings to be finalized will be the NEO exchange listing. “We believe that we will be trading on the NEO exchange within the next 30 days, around the first or second week of March,” he says. For the LSE, Bartch says Mydecine’s preliminary prospectus will be completed within the next few weeks. For the NASDAQ, Mydecine has been appointed a reviewer and Bartch says he expects the company will be listed in the next four to six months. “We continue to check boxes off,” Bartch says. “We have a couple of initiatives in the company that I can’t talk about now but the market should react accordingly and that should get us over the price requirement if not there could be additional capital raising to meet that requirement,” he says.

Being included in Horizons ETFs Managements’ first psychedelic stock ETF which began trading on the NEO Exchange in January is an honour, Bartch says. “The ETF was incredibly beneficial for the industry as a whole,” he says. “We would have been incredibly disappointed if we weren’t included because we feel we are an industry leader. As some of the initiatives we are working on come to light, we expect our percentage in the ETF will increase as we grow as a company.”

If you enjoyed this article, check out Truffle Report‘s interview with Daniel Carcillo, CEO of Wesana Health here.