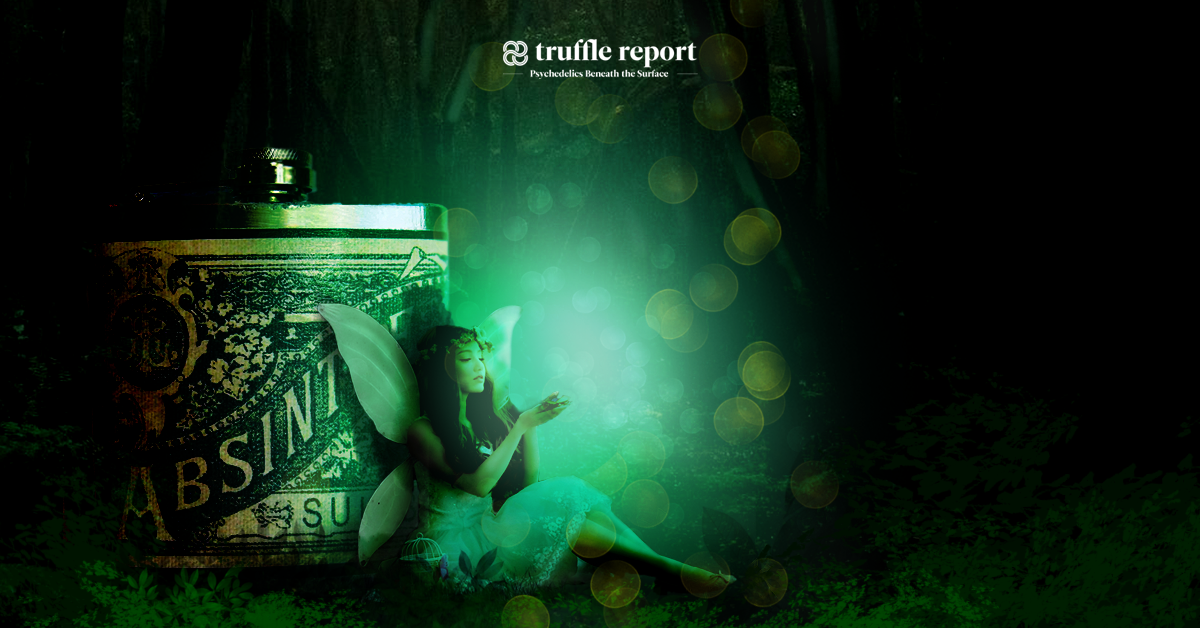 Like many others, I was raised by television to believe that absinthe was not like other alcoholic drinks. For a long time, it was considered common knowledge that absinthe could produce hallucinogenic visions coupled with extraordinary drunkenness. When I finally enjoyed a night at an absinthe bar with an old high school buddy, the drink produced no green fairies for me — although it was delicious, and I had an excellent time.

Despite evidence to the contrary, many drinkers still hold onto the misconception that absinthe is hallucinogenic. Where did this erroneous idea come from, and how did it get so deeply ingrained within the public consciousness? As it turns out, this widespread misinformation about absinthe has a lot in common with our current and historical public misconceptions about psychedelics.

Absinthe is a liquor that is generally made with wormwood, fennel, and star anise. It’s known for its trademark green hue, although this is usually added to the clear product after distillation using chlorophyll from herbs. It has an intensely high alcohol content at 55-75 percent, and a strong, herbaceous flavour — which is the reason it is traditionally diluted with water poured over a sugar cube. After this ritual, the drink will louche, turning cloudy and opaque. That whole business about lighting the sugar cube on fire and adding it to the absinthe was developed more recently, to conceal poor-quality absinthe brands that do not louche.

The contemporary form of absinthe emerged throughout the 19th century, but other versions of it date back much further. The name derives from the Greek “absinthion”, which was an elixir of wormwood soaked in wine that was used for digestion, and to aid in childbirth. In the intervening centuries, wormwood saw plenty of medicinal use. Wormwood’s name is a reference to its use as a treatment for gastrointestinal parasites, which persists today in the form of some natural health products.

Along with alcohol, absinthe usually contains a certain amount of thujone extracted from  wormwood. For a long time, this terpene was blamed for the supposed hallucinations caused by absinthe. Thujone can also be found in certain herbs like tarragon, so why is nobody tripping after enjoying a nice bearnaise sauce with their steak?

As it turns out, thujone can be toxic at high enough levels, but it would be difficult to ingest enough herbs or even absinthe to experience these effects. Even if you somehow managed to do so, dangerous levels of thujone have been observed to cause seizures and convulsions, rather than hallucinations. As far as absinthe is concerned, the amount needed to cause these effects would be difficult to drink, since you would experience alcohol poisoning long before.

Lifestyles of the French and the Famous

Throughout the 19th century, France was the centre of trendy absinthe drinking. Enjoying wine steeped with wormwood became a practice during the French colonization of African nations, in order to combat illness from poor living conditions and a lack of clean drinking water. In France, having a drink of absinthe was initially a form of nationalistic pride in response to this. 5 o’clock became known as the “green hour”, during which absinthe was enjoyed by many. As the trend progressed, however, it became associated with a more bohemian, artistically-driven crowd.

A range of French poets, playwrights, and artists became infatuated with the drink and advocated for its use as a creative inspiration.This included artists like Manet, Picasso, and Van Gogh, and poets like Arthur Rimbaud, Paul Marie Verlaine, and most notably, Charles Baudelaire. It inspired playwright Alfred Jarry’s Ubu Roi, the impact of which ripples into the modern age — as the character of Pere Ubu partly inspired the stage persona of Marilyn Manson, who even has his own brand of absinthe. The romanticism of absinthe by this crowd, particularly within the writings of Rimbaud and Baudelaire, would spark the idea that absinthe was hallucinogenic in the public mind. This was where the problem began.

How and Why the Myth was Built

While it had been first seen as a symbol of nationalism, then a symbol of opulence, absinthe eventually became seen as a symbol of cultural deterioration. The spread of industrialization had created poor living conditions for many, resulting in social unrest. Fewer people were having children. Drunkenness and violent bar brawls were more common than ever. Public officials started to blame absinthe.

Dr. Valentin Magnan, the physician-in-chief of Sainte-Anne asylum, conducted animal experiments with rats and a dog to see how the effects of absinthe compared to ordinary alcohol. Magnan’s experiment was rife with confirmation bias, as he administered pure wormwood oil to small animals and observed convulsions in the rats and bizarre behaviour from the dog. While we now know that convulsions are a toxic effect of high amounts of thujone, Magnan used these observations to conclude that absinthe did cause visions and madness — positioning the condition of “absinthism” as distinct from drunkenness or alcoholism.

The situation boiled over in 1905, when the Swiss laborer Jean Lanfray shot his pregnant wife and two children after a days-long drinking binge. Lanfray’s bender had included all kinds of alcohol, including cognac and absurd amounts of wine, but the absinthe he drank was blamed for his temporary madness. The idea that he suffered from absinthism was even used as a part of his defence in court. Found guilty, Lanfray killed himself a few days into his imprisonment. What happened to Lanfray reflects one of the more commonly held theories about absinthe visions — which is that they’re really just the result of excessive alcohol intake, facilitated by absinthe’s high alcohol content.

The French wine industry and advocates within the temperance movement were all too happy to spread the idea that absinthe madness was to blame for these misfortunes. Wine producers had been threatened by absinthe’s growing popularity among the working class. By 1915, the U.S. and most of Europe (with exceptions like Spain and England) had banned production and consumption of absinthe altogether.

The green fairy saw a surge in popularity in the U.K. during the 90s. When no one was observing fits of madness among imbibers, other countries gradually began to loosen their restrictions and lift bans. Scientists have since observed that samples of absinthe from the 19th century did not contain enough thujone to produce toxic effects, and that thujone does not even produce hallucinations at toxic levels. You can observe clear parallels between the mythology of absinthe and the widespread misinformation concerning psychedelics that persisted in the latter half of the 20th century. Absinthe might not generate visions like psychedelics do, but both became the centre of misinformation campaigns spurred by corporate and political interests, and as a response to a counterculture group. They were each viewed as symbols of cultural degradation, before being vindicated by a stronger, more rigorous scientific process.