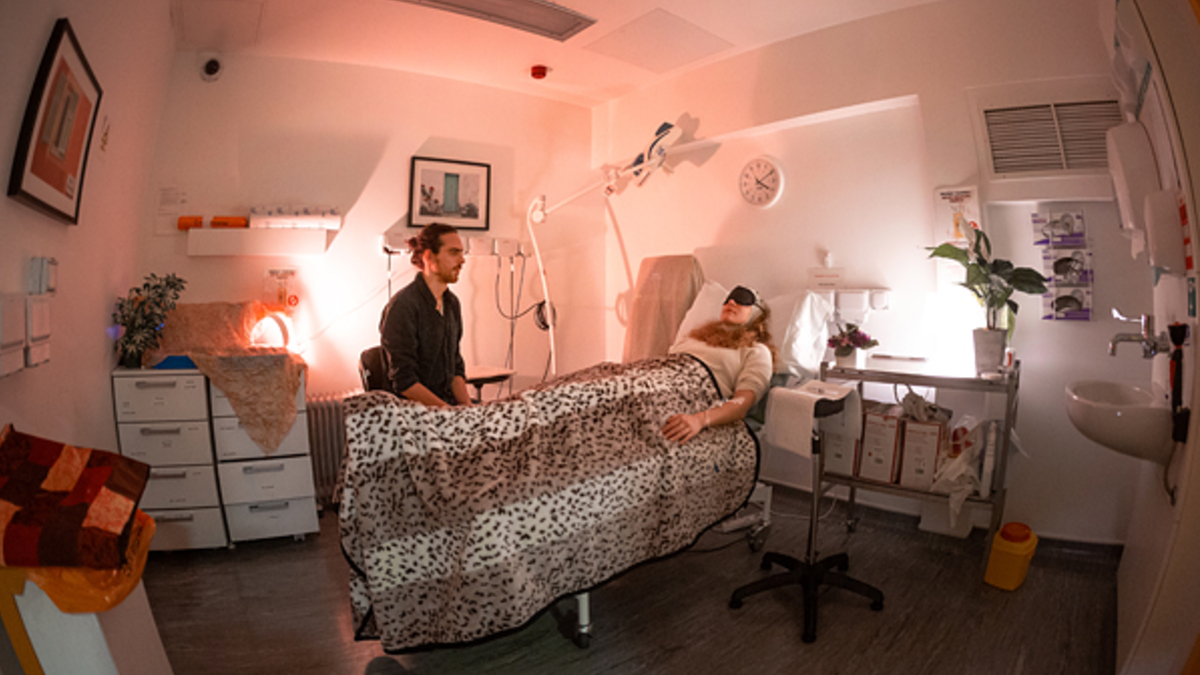 About 60 Years Later, Psychedelic Research is Coming Back Across Canada

Back in the 1950s, Canada was considered to be somewhat of a psychedelic research hub.

At the forefront of this research was the work being done at Weyburn Mental Hospital, about an hour-and-a-half drive away from Regina, Sask. At that hospital on the prairies, researchers Humphry Osmond and Abram Hoffer developed a program with two goals: first, to use LSD and mescaline to attempt to develop a model of disease for schizophrenia to inform treatment, and second, to give LSD to patients with alcoholism to try to treat their addiction.

While Osmond and Hoffer’s work drew widespread attention and showed promise — especially in early alcoholism studies that recorded recovery rates of up to 90 percent — their research was eventually shelved, due in part to shifts in the province’s political system and global changes in cultural attitudes around psychedelics.

But now, about 60 years after that original research was conducted at the since-demolished hospital, a resurgent sector of Canadian psychedelic research is rising from the rubble. Helping this revival along are frustrations with current treatment options available for people with mental health issues, shifts in public opinion around psychedelics, and openings in research pathways under Health Canada.

While work has continued, largely underground, since these substances were criminalized, Canadian psychedelic research is taking place at post-secondary and research institutions for the first time in decades. Using substances such as LSD, psilocybin, ayahuasca, and MDMA, researchers across the country are rekindling those early sparks of psychedelic study to examine and potentially treat everything from post-traumatic stress disorder and addiction to eating disorders and depression.

U of T Studies Exploring Impacts of Microdosing Psychedelics

If you’re looking for hard evidence of Canada’s psychedelic renaissance, the University of Toronto, the country’s largest post-secondary institution, is a good place to start. At U of T’s Mississauga campus, you’ll find the psychedelic studies research program. The program is the brainchild of Rotem Petranker, a clinical psychology PhD student at Toronto’s York University, Thomas Anderson, a cognitive neuroscience PhD student at U of T, and Norman Farb, a U of T psychology professor.

Petranker and Anderson first worked together on research into microdosing psychedelics in 2017, the first scientific study of its kind. For the study, published in the journal Psychopharmacology in 2018, the team polled just over 900 people from 29 countries using an anonymous online survey about microdosing habits. The groundbreaking research found a relationship between microdosing and lowered dysfunctional attitudes and negative emotionality, as well as increased wisdom, open-mindedness, and creativity. Since then, the group has published a number of other studies on microdosing as well.

Along with the psychedelic studies program, Petranker and Anderson also co-founded and now direct the Canadian Centre for Psychedelic Science, a research and consulting company. Five or ten years down the road, Petranker says, the hope is for the centre to be a beacon for open science in psychedelics. “People will come to us when they want to assess whether a certain program of research is rigorous and whether it complies with the principles of open science,” he tells Truffle Report.

Next on the agenda for Petranker and the team is a major clinical trial into the potential benefits and drawbacks of microdosing. For the study, participants will come in for eight weeks altogether, splitting into two groups, receiving microdoses of either psilocybin or a placebo, then switching halfway through. With this approach, the team also hopes to measure how long it takes for the effects of microdosing to kick in, and then to disappear.

“The idea is for this to be the most rigorous, most comprehensive microdosing study to date,” says Petranker, adding that the team hopes to start recruiting participants early next year.

Over on the west coast, British Columbia has emerged as another hotspot for the resurgence of psychedelic research in Canada. The BC Centre on Substance Use (BCCSU) is a provincially-mandated organization, linked with the University of British Columbia, that is looking to develop, help implement, and evaluate evidence-based approaches to substance use and addiction.

Under the guidance of the Multidisciplinary Association for Psychedelic Studies (MAPS), the BCCSU is part of a study into the leveraging of MDMA-assisted psychotherapy to treat PTSD taking place at fifteen sites across Canada, the United States, and Israel. The trial is now in Phase III, with hopes of having prescription approval by as soon as next year.

So far, the results have been staggering. In the completed Phase II trials with 107 participants, all of whom had chronic, treatment-resistant PTSD for an average of about eighteen years, 68 percent of participants no longer had PTSD at the twelve-month follow-up.

Dr. Mark Haden, executive director of MAPS Canada and a professor at UBC’s school of population health, says using psychedelics to treat PTSD is such a significant goal because the trauma at the heart of the condition is often intertwined with a handful of other conditions. “If we can heal trauma, we can certainly heal a whole variety of different diagnoses,” says Haden.

MAPS Canada has two other studies in the works as well, including one that hopes to examine the potential of using MDMA-assisted psychotherapy to treat two eating disorders, and another that would test the combination of cognitive processing therapy and MDMA to treat PTSD.

Dr. Evan Wood is the former executive director of the BCCSU and a professor of medicine at UBC who has been involved with the MAPS studies on PTSD. According to Wood, one of the reasons he was drawn into psychedelic research in the first place was the experiences of the people he treats. Wood says he’s had a number of patients over the years who have sought out psychedelic-assisted psychotherapy on their own accord, and have come back “totally transformed.”

Wood’s work is also emblematic of another emerging trend of Canada’s psychedelic renaissance: researchers teaming up with for-profit corporations. Wood recently took on a new role as chief medical officer of Numinus, a Vancouver-based health-care company working toward evidence-based safe, accessible psychedelic-assisted psychotherapy. Numinus is studying a wide range of psychedelics, including psilocybin, DMT, and MDMA.

“There are big challenges in our society with mental health and just a frank recognition that the existing therapies we have have major limitations and harms associated with them,” says Wood. “Word is getting out that (psychedelics) can have a dramatic beneficial impact on people. The horse is out of the barn in terms of the momentum behind it now.”

Numinus isn’t the only private sector organization wading into psychedelic research either. MindMed, a neuro-pharmaceutical company based in Toronto and New York City, is running clinical trials into the potential of psychedelics to treat anxiety, ADHD, cluster headaches, and addiction. Vancouver-based Champignon Brands is also researching how psychedelics, particularly psilocybin, could be leveraged to treat depression, PTSD, and addiction.

Vallely, a classics and religious studies professor and anthropologist, is interested in the ways psychedelics intersect with spirituality and death. Williams is the Canada Research Chair in mental health disparities and a psychology professor, known in part for her years of work toward making psychedelic medicine more accessible.

This summer, the duo launched the psychedelic and spirituality studies initiative, a three-course graduate program, and are proposing to create a one-year master’s program awaiting approval from the U of O’s administration. Ten years down the road, Vallely says she hopes that the work at the U of O snowballs into an institute focused on psychedelics and consciousness studies.

“I do hope (psychedelic studies) mushrooms, and it’s just in every university like any other program,” says Vallely.

A few hours away in Kingston at Queen’s University, health scientist, part-time professor, and PhD candidate Ron Shore launched the Dēlos Psychedelics Learning Lab in 2018. The lab is focused on improving the competencies and capacities for psychedelic research at Queen’s, and to conduct knowledge synthesis research and transfer. So far, the team has conducted two scoping reviews: one on psilocybin-assisted therapies, and another on animal models of psilocybin research.

Shore says the twenty-three years he spent in front-line harm reduction working with marginalized communities with high rates of substance dependence, concurrent mental health disorders, and poverty is what led him to psychedelic research.

“I was tired of offering clients ineffectual treatments,” Shore writes in an email to Truffle Report. “I was hoping to contribute to developing or disseminating novel forms of effective therapy which meet the whole person and address more of the roots of suffering in consciousness, in how we ‘think’ of and experience ourselves and our place in the world.”

At Laurentian University in Sudbury, psychology professor Adèle Robinson is looking at the prospect of the ceremonial drinking of ayahuasca to treat eating disorders. In a study published in 2017 in the Journal of Psychoactive Drugs, Robinson and the team interviewed sixteen people with eating disorders who had used ayahuasca and found the ceremonial drinking of the psychedelic showed promise in treatment.

Robinson told the Daily Mail that in her research, the brew “really facilitates the inner healing mechanisms that can get interrupted by one’s own psychological defenses.”

How to Build a Lasting Renaissance

The psychedelic renaissance in Canada seems like it’s just getting started, but for some observers, the collapse of the burgeoning research of the 1960s hangs ominously over these new findings and frontiers.

“I see some researchers that are playing really fast and loose, and it’s scaring me,” says Petranker, who advocates in one paper for the tenets of pre-registered trials, open science, scientific rigour, and transparency to prevent a similar research collapse. “It only takes one person to cause a negative, serious adverse effect.”

While Wood says he doesn’t see current research facing the same challenges it did in the ’60s due to the growing recognition of psychedelics as viable tools for healing, he does believe harm reduction and public education will be especially important in the coming years as more and more people rediscover psychedelics, or are exposed to them for the first time.

Wood says stigma around substance use research, psychedelics, and people who use drugs more generally continues to persist on university campuses, and across the country as a whole.

“The population in North America was miseducated as a result of the war on drugs approach to things, and that created a lot of stigma across society,” says Wood. “It’s just a horrible, horrible, misguided policy that led to so much harm and suffering, and obviously, it’s particularly affected minority groups for the most part.”

Haden is on the same page as Wood, adding that the cultural divides that existed in the 1960s simply aren’t as prominent today. The next step for psychedelic studies in Canada, says Haden, is to move beyond only conducting research geared toward treating specific diagnoses, and instead explore ways to improve the lives of people who are already considered ‘healthy.’