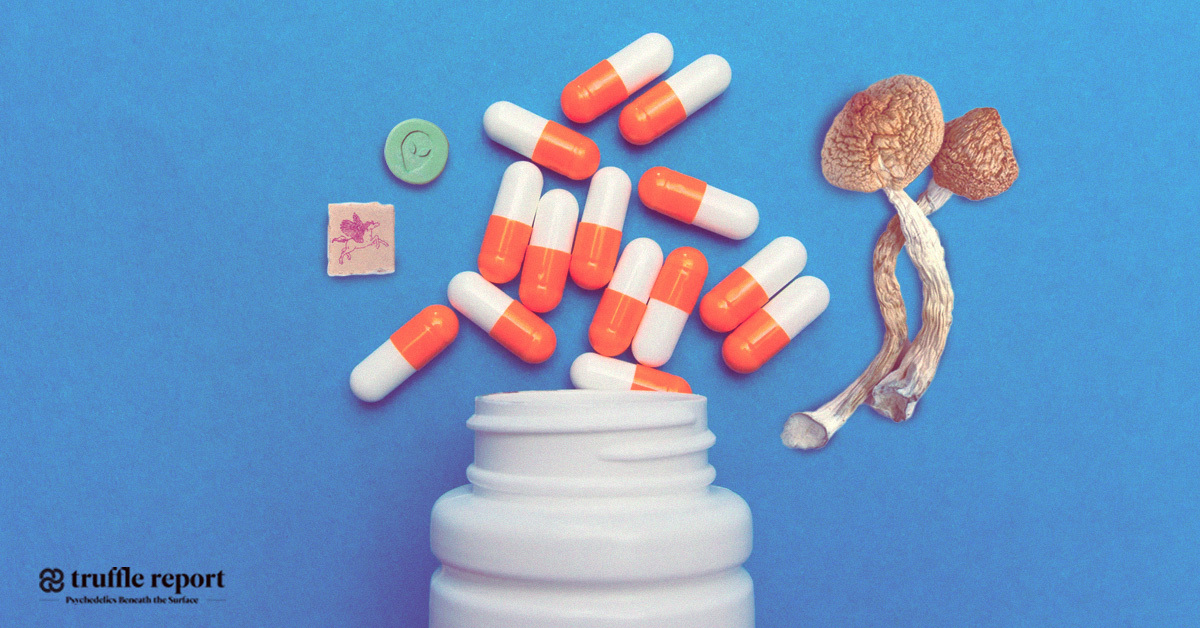 How Do Antidepressants and Psychedelics Interact?

Psychedelic drugs are making their way into mainstream mental health treatment after decades of being sidelined. Promising clinical trials show that they may be an effective treatment for mental health disorders, such as depression and anxiety. Antidepressants, along with psychotherapy, are the current key depression treatment worldwide. According to data from the National Health and Nutrition Examination Survey (NHANES) on antidepressant use, during 2015-2018, 13.2 percent of adults aged 18 years and over had used antidepressants in the past 30 days (at time of survey) in the United States. These usage figures are higher among women (17.7 percent) than men (8.4 percent). Since antidepressants may help in some situations and not in others, sufferers are becoming more interested in the effectiveness of psychedelic drugs as a possible depression treatment. How might psychedelic medicine impact those already on antidepressants?

Antidepressants and the Serotonergic System

The classical psychedelics (including psilocybin, LSD, and DMT) work by activating the serotonergic receptors on neurons, causing several brain systems to change, the same as most antidepressants. Serotonin is a neurotransmitter that affects brain development, perception, mood, and mental processing. It is believed that lack of serotonin triggers depression, however, more research is needed. The majority of antidepressants work by increasing the levels of serotonin in the brain. On the other hand, classical psychedelic substances, rather than increasing levels, connect with 5-hydroxytryptamine (5‐HT2A) receptors which are known to be the pharmacological switch to the psychedelic experience. Although both psychedelics and antidepressants can work through the same receptors, the level of risks depends on the kind of antidepressants and psychedelic drugs patients are taking.

The Most Commonly Prescribed Antidepressants

Selective Serotonin Reuptake Inhibitors (SSRIs) are the most common antidepressants prescribed for depression, post-traumatic stress disorder (PTSD), obsessive-compulsive disorder (OCD), and other mental health disorders as they cause fewer side effects. These antidepressants include Prozac, Zoloft, Cipralex, and others.

Serotonin Norepinephrine Reuptake Inhibitors (SNRI) are a similar class of antidepressant to SSRIs, with the exception that they boost both serotonin and norepinephrine. These antidepressants include Cymbalta, Effexor, Fetzima and others.

Other medications are rarely used nowadays; but may work better for some sufferers:

Psychedelics and Antidepressants: What we Know so far

There is little to no direct scientific research into combining psychedelics with antidepressants. Current clinical trials into psilocybin for major depressive disorder require all applicants/patients to not be taking antidepressants in order to maintain a pharmacological baseline. Therefore, all the information available is based more on anecdotal reports.

The results from clinical trials show that psilocybin can significantly decrease depression. However, there may be a risk of overstimulation when patients combine psilocybin with other medications. Since, theoretically, antidepressants can reduce the effectiveness of psychedelics, it is not recommended that the two be combined.

A study by Katherine Bonson, a pharmacologist with the U.S. Food and Drug Administration (FDA), collected first-hand responses from volunteers who self-administered LSD before or during chronic administration of an antidepressant. In the 1996 research, it was reported that 28 out of 32 subjects who had taken an antidepressant with inhibitory effects on serotonin (5-HT) reuptake (fluoxetine, paroxetine, sertraline, trazodone) for over three weeks had a decreased response to LSD. One of the 32 subjects, who had taken fluoxetine for only one week had an increased response to LSD.

A report by Howard Markel from the University of Michigan Medical School described the case of two teenagers who had a long history of abuse of LSD and symptoms of major depressive disorder. Prescribed antidepressant therapy with SSRIs instigated the onset or worsening of LSD flashback syndrome, in which the subjects reported vivid colours, visual disturbances, and feelings of being disconnected from reality. Another report described a case of a 47-year-old man with a long history of mood disorder and alcohol dependence. This patient had severe panic attacks and depression, and a long history of alcohol and LSD abuse. When he was first treated for depression with paroxetine, he began tripping. The reaction persisted until he stopped taking the prescribed medicine. He reported his reaction to paroxetine as “extreme.”

According to anecdotal reports, there is a strong possibility of experiencing extreme or unusual effects of an LSD trip, which can develop into a worse psychological state than sufferers anticipated. One user reported a seizure after taking LSD while on Celexure. Others reported that taking LSD with lithium results in seizures, severe dissociation, heart attacks, and eventually death.

Mixing MDMA with SSRIs can decrease the effects of MDMA, as these substances compete  for access to the neurons in the brain. In a study by  researchers from the Pharmacology Research Unit in Spain, it was revealed that patients who consumed MDMA with antidepressants tend to experience a decrease in the effects of MDMA. In a double-blind placebo-controlled study, twelve patients were given 20mg paroxetine (or placebo) for the course of three days before receiving 100mg MDMA. According to the study “decrease in the effects of MDMA could lead users to take higher doses of MDMA and to produce potential life-threatening toxic effects.”

According to a study by researchers from the University of Helsinki, the interaction of antidepressant moclobemide and MDMA can cause serotonin syndrome. Four patients died as a result of this drug combination. Another report by scientists from Denver General Hospital described a case of a 50-year-old man who took the antidepressant phenelzine with MDMA. According to the report, he developed “marked hypertension, diaphoresis, altered mental status, and hypertonicity lasting 5-6 hours.” The scientists concluded that MDMA can be the reason for significant toxicity in patients taking MAOIs.

Ayahuasca, a South American brew, is showing promise in addressing conditions such as treatment-resistant depression and PTSD. The psychedelic plant concoction contains MAOIs, which can affect serotonin levels when mixed with other drugs, including antidepressants. According to the report by Jace Callaway, a medical researcher from the University of Kuopio, combining ayahuasca with SSRI antidepressants may induce serotonin syndrome with a “potentially grave outcome.” Together these drugs can cause serious side effects including high blood pressure, fever, convulsions, and death.

A Survey From Johns Hopkins

Antidepressants are among the most frequently prescribed classes of medication in the developed world. Before psychedelics can enter the mainstream as medicine in any form, we need to know more about how they will interact with conventional pharmacological solutions. The Johns Hopkins Center for Psychedelic and Consciousness Research is currently conducting a survey to better understand “the effects of psilocybin in people who have ever taken a moderate to large dose of psilocybin mushrooms while taking, or within 2 years of stopping a prescribed antidepressant medication.” If you fit this description and would like to anonymously participate, details can be found here.