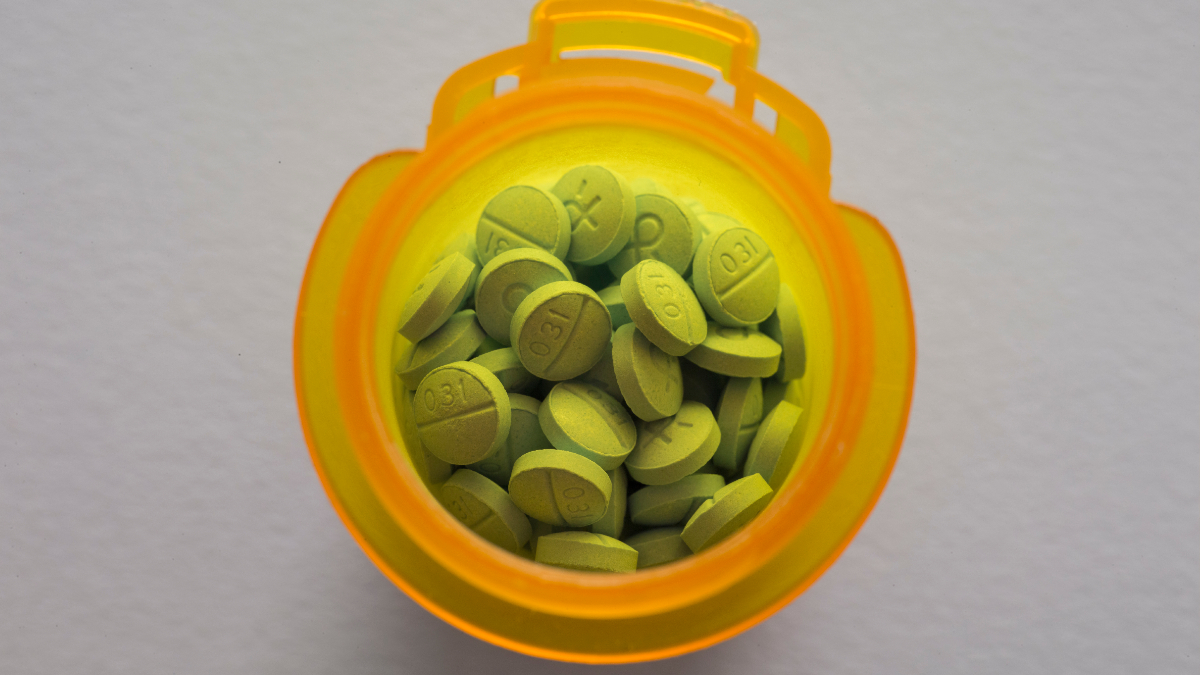 How Could Psychedelics Be Leveraged to Treat Addiction?

While news cycles in recent months have been dominated by Canada’s struggle to contain the spread of COVID-19, another relentless and deadly epidemic has been wreaking havoc on the lives of thousands of people across the country: the opioid crisis.

Opioids are a group of pain-relieving drugs sourced from the opium-producing poppy plant or, more commonly these days, synthesized in a lab, including OxyContin, Vicodin, heroin, and fentanyl — an especially dangerous synthetic opioid fifty to one hundred times more potent than morphine. While opioids are typically prescribed to treat moderate to severe pain, they also produce an addictive high that can turn deadly. “At lower doses, opioids may make you feel sleepy, but higher doses can slow your breathing and heart rate, which can lead to death,” according to Mayo Clinic.

The Canadian Centre on Substance Use reports that between January 2016 and December 2018 alone, there were more than 11,500 apparent opioid-related deaths in the country. And in 2019, about twelve people in Canada died every day from an opioid-related overdose. In some parts of Canada, overdoses have been significantly more deadly than COVID-19: In British Columbia, The Tyee reports that illicit drug overdose deaths — mainly caused by toxic amounts of fentanyl in street drugs — killed ten times as many British Columbians as COVID-19 in July at 175 deaths.

A Public Health Agency of Canada (PHAC) report released in October confirmed that opioid deaths have skyrocketed amid the COVID-19 pandemic, according to CBC News. B.C.’s highest monthly opioid death toll of 181 in June 2020 was more than double the 76 recorded deaths in June 2019. In Ontario, preliminary data shows that the number of confirmed and probable opioid-related deaths has jumped from 148 deaths in January to 220 deaths in May — an increase of nearly fifty percent.

Research also shows that the opioid epidemic hits racialized and marginalized communities the hardest. For example, the PHAC report found First Nations people were nearly six times more likely to die from an overdose than other people in B.C. “The growing number of overdoses and deaths caused by opioids, including fentanyl, is a public health crisis,” a federal government website reads. “This is a complex health and social issue that needs a response that is comprehensive, collaborative, compassionate, and evidence-based.”

Potential routes to tackling Canada’s opioid epidemic (and a similar crisis taking place south of the border) include increasing access to supervised consumption sites, safe supply and access to treatment, boosting education campaigns and availability of naloxone kits, tackling stigma and intersecting systems of oppression, and, most centrally, decriminalization.

However, there’s another emerging solution from an unlikely source: other psychoactive substances, namely, psychedelics. Cultivated by the psychedelic renaissance, a growing body of research is suggesting that substances like psilocybin, LSD, and MDMA could play an important role in addiction treatment, fitting into a broader goal of beating Canada’s opioid epidemic and saving lives.

While the use of psychedelics in addiction treatment might sound like a novel (and even radical) idea to the untrained ear, the roots of this scientific research can be traced back to at least to the mid-20th century. In fact, one of the early hubs of psychedelic-assisted addiction research was the Canadian prairies at Saskatchewan’s Weyburn Mental Hospital. At Weyburn, about an hour-and-a-half drive away from Regina, researchers conducted groundbreaking studies in the 1950s that examined whether LSD and mescaline could be leveraged to treat addiction.

Weyburn superintendent Humphry Osmond and provincial public health psychiatric researcher Abram Hoffer would give patients what would be considered by today’s standards a single “massive dose” of LSD under medical supervision. A fairly intense eight to ten-hour period would follow, where the patient would go through intensive psychotherapy, followed by more counselling and monitoring down the road. Based on six months to two-year follow-ups, the results were riveting. While other interventions at the same time usually showed success rates of about thirty percent, Canada Research Chair in the history of medicine Erika Dyck told Truffle last month, the studies at Weyburn were claiming up to ninety percent success rates.

While the research being conducted at Weyburn and a number of other institutions showed immense promise, it wasn’t immune to the challenges posed by a sweeping tide of negative cultural attitudes around psychedelics and their eventual criminalization. As a result, psychedelic research was pushed underground in the 1960s and remained largely dormant until the early 2000s, when groundbreaking studies from John Hopkins University helped redirect the spotlight back on the potential of psychedelics to treat a multitude of mental health issues. These findings, in tandem with decades of activism from grassroots organizers, have helped construct psychedelics as a meaningful way to treat depression, end-of-life-anxiety, PTSD, and addiction.

Rekindling Early Sparks of Research with New Focus on Opioids

Around seventy-five years after Osmond and Hoffer, researchers around the world are beginning to pick up where the Saskatchewan pioneers left off. Like the Weyburn findings, the results being generated in the 21st century are also quite promising, albeit easier for the scientific community to digest.

These days, the naturally-occurring psychedelic substance ibogaine has emerged as a particularly strong candidate for helping people overcome opioid, methamphetamine, and cocaine addiction. Ibogaine is sourced from the iboga shrub that is native to West Africa, where it has been used ceremonially for centuries. In small doses, ibogaine is a mild stimulant, but “induces a profound psychedelic state” in larger doses, according to MAPS (Multidisciplinary Association for Psychedelic Studies). It’s legal to possess ibogaine in Canada, but “the sale of health products containing ibogaine in Canada is not permitted,” Health Canada said in a 2017 statement to CBC News.

Ibogaine as an ‘Addiction Interrupter’

The pioneering research into ibogaine’s potential to help people with addiction issues can be traced back to Chilean psychologist Claudio Naranjo. In the early 1960s, Naranjo published the results of forty ibogaine-assisted therapy sessions he had led with thirty different patients. Interest around the potential of ibogaine to help people with addictions has only grown since then. A 2006 study of about 3,400 people who had used ibogaine found that 68 percent of those people had ingested the substance for treatment of a substance-related disorder, 55 percent specifically for opioid withdrawal. Experts say it’s important to acknowledge that ibogaine isn’t an addiction cure. University of Miami researcher and professor Deborah Mash put it to Al Jazeera in 2014 that ibogaine is an “addiction interrupter,” helping to suppress withdrawal or cravings.

MAPS has run two observational studies focusing on independent ibogaine treatment centres in Mexico and New Zealand, both published in 2017. The Mexican study found that ibogaine was “associated with substantive effects on opioid withdrawal symptoms and drug use in subjects for whom other treatments had been unsuccessful,” with half of the participants reporting no opioid use for thirty days after treatment. The New Zealand study concluded that a “single ibogaine treatment reduced opioid withdrawal symptoms and achieved opioid cessation or sustained reduced use in dependent individuals as measured over 12 months.”

However, ibogaine does come with risks and controversies, which could make approval of the substance for treatment more difficult. A 2012 study published in the journal Therapeutic Advances in Psychopharmacology linked at least nineteen deaths to ibogaine since 1990. “These were attributed to a variety of factors, including pre-existing medical conditions, especially cardiac conditions, as well as seizures resulting from acute withdrawal from alcohol or benzodiazepines, and in other cases the co-administration of one or more drugs of abuse,” according to the Global Ibogaine Therapy Alliance.

Studies suggest ayahuasca, a psychedelic brew containing DMT that originated in South America, and with a deep history of ceremonial and religious use, could be helpful in addiction treatment as well.

A 1996 study of randomly selected members of União do Vegetal (UDV), a Brazilian ayahuasca church, found that the majority of people in the study reported a prior history of moderate to severe drug issues, but had ceased using substances other than ayahuasca after joining the church and “attributed their improved health behaviours to ayahuasca drinking.” Another study examined an America-based chapter of the Santo Daime ayahuasca church, interviewing thirty-two members. Twenty-four of the members interviewed reported past instances of substance abuse or dependence, but all but two were in sustained remission.

MAPS led a study with researchers at the University of British Columbia and the University of Victoria into ayahuasca-assisted treatment for substance use in a rural First Nations community in B.C. Twelve participants went through retreats composed of four days of group counselling and two expert-led ayahuasca ceremonies. The self-reported use of alcohol, tobacco, and cocaine all declined, while cannabis and opiate use did not. “All study participants reported positive and lasting changes from participating in the retreats,” the study concluded, noting scales assessing participants’ hopefulness, empowerment, mindfulness, and quality of life showed improvements.

Psychedelics in Treatment for Tobacco and Alcohol Addiction

Beyond opioid, methamphetamine, and cocaine addiction, a number of other studies have suggested psychedelics may be useful in treating tobacco and alcohol addiction as well, including work being done at John Hopkins University.

One 2014 study from John Hopkins utilized psilocybin in conjunction with cognitive behavioural therapy to help fifteen smokers stub out their habit. After six months, the abstinence rate for participants in the study was 80 percent, well above the 35 percent six-month success rates seen when using varenicline, “widely considered to be the most effective smoking cessation drug.” One year after treatment, ten of the fifteen study participants had not started smoking again.

Researchers at John Hopkins are also looking at the potential of psychedelics to treat alcoholism. For the study, the results of which were published in 2019 in the Journal of Psychopharmacology, researchers used an anonymous online survey of people with prior alcohol use disorder (AUD) reporting stopping or reducing their alcohol consumption following psychedelic use outside of a clinical setting.

The 343 respondents to the survey reported an average seven years of problematic alcohol use before their psychedelic experience, which most described as taking a moderate or high dose of LSD or psilocybin. After their psychedelic experience, 83 percent of respondents no longer met criteria to be diagnosed with AUD. While the study couldn’t demonstrate causality, researchers concluded the results “suggest that naturalistic psychedelic use may lead to cessation or reduction in problematic alcohol use, supporting further investigation of psychedelic-assisted treatment for AUD.”