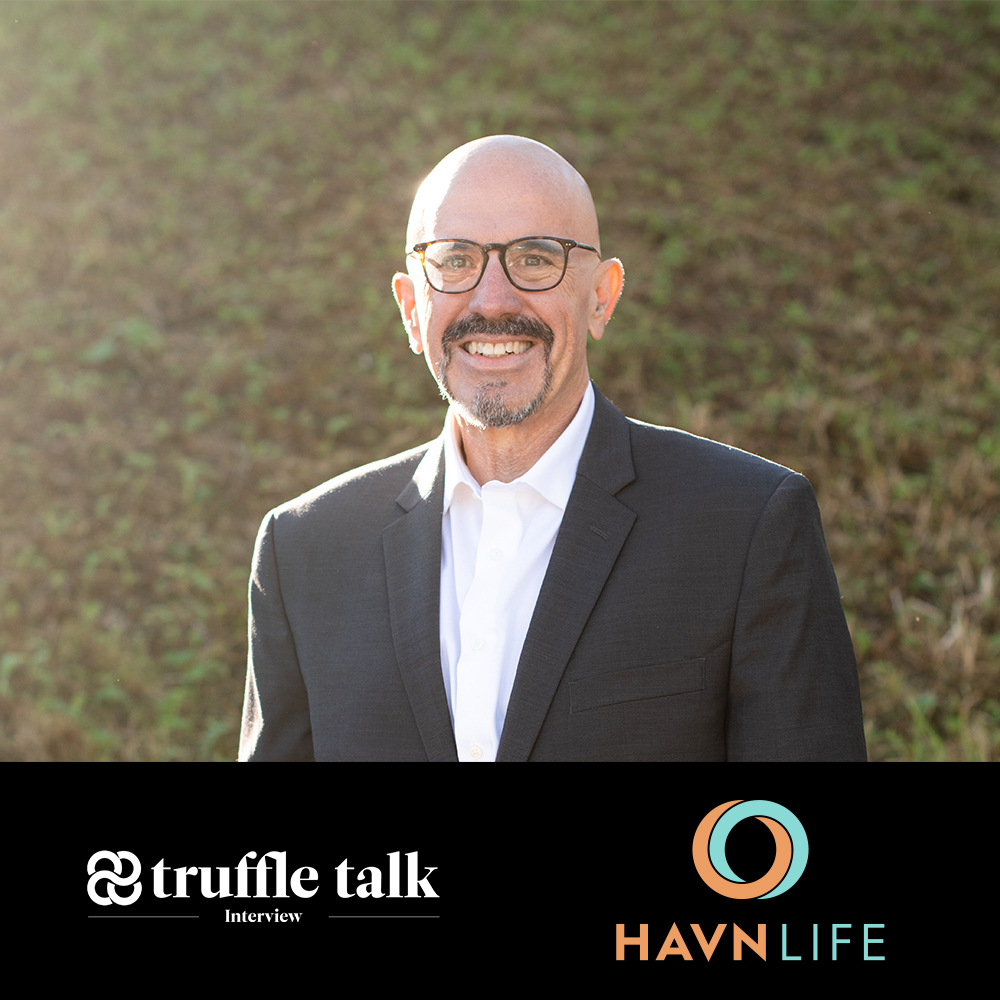 Before he became the CEO of emerging biotechnology company Havn Life Sciences, Tim Moore was motivated to enter the psychedelics space because of his personal experience dealing with mental health issues within his family. “As I tell this story now, know that at the end everyone’s fine,” Moore tells Truffle Report.

“I have five sons. My oldest is 35 and my youngest is 24. Two have anxiety disorders, one with Aspergers. One son was suicidal at age 14. One of my sons was hit by a drunk driver six years ago, was disabled, and became an opioid addict — it was cannabis that ultimately saved his life.”

Moore says his son’s experience got him into the cannabis industry about four years ago, which then led him to discover the promise that psychedelics offered for the treatment of anxiety, depression, post-traumatic stress disorder (PTSD), substance abuse, and anger management.

With more than 30 years of experience in the consumer packaged goods industry, Moore says he was recruited by Havn Life due to his expertise in this area. “The company recognized the need to have business operators to pair with the science team so they could take their strategy, breathe life into it, and actually execute it,” he tells Truffle Report. “But what motivated me to actually come on board myself was the personal experience of having dealt with mental health issues for the last three decades.”

“We are in the business of hope,” Moore says of Havn Life’s work in the psychedelics field. “I’m excited that as a company, and as an industry, we can offer people hope for a better life and an escape from pharmaceuticals. When I look in the rearview mirror at how I medicated my sons [with currently available medications], I medicated them to make them easier to manage, not to make them better. I didn’t recognize that at the time, but I do now.”

“If you have anxiety, depression, or PTSD the best you can really hope for right now with drugs is to be numbed enough to get through the day, not to live a normal life. That’s no way to live. People get fatigued from that, which leads to suicide when they get tired of that numbness, and that’s what brings me here. It’s about improving human performance and giving people their lives back based on scientific evidence.”

Based in Vancouver, Havn Life (CSE: HAVN) (OTC: HAVLF) (FSE: 5NP) is working towards developing a supply chain for the regulated production of medical psilocybin. “We saw a gap in the marketplace,” Moore says. “There has been a lot of very legitimate science done with psilocybin over the decades and this continues today but most researchers are relying on synthetic psilocybin. First of all, synthetic psilocybin is very expensive. And it is only the single model, the isolate of psilocybin, so it doesn’t offer the full potential of the entourage effect from the full spectrum of other molecules that are available in the mushroom.”

“We saw an opportunity to build a supply chain of naturally derived compounds to support the industry. If you think of synthetic THC, it fell flat with the cannabis community because they wanted something from a plant, they didn’t want a molecule from a lab. We are seeing the same kind of responses to psilocybin in that there’s a preference for a plant-derived solution. It’s for people that have rejected pharmaceuticals and are seeking an alternative therapy.”

Moore says that while mushrooms are easy to grow, producing them in a Good Manufacturing Practice (GMP) compliant facility was a challenge. “We are doing the foundational work to build these protocols, and the standard operating procedures so that we can have a GMP compliant facility for the production of these naturally derived compounds to be used in Food and Drug Administration (FDA) and Health Canada studies and ultimately as active pharmaceutical ingredients.”

In March, Havn Life announced it has entered into a letter of intent (LOI) with Kingston-based nutraceutical company Hypha Wellness Jamaica Psilocybin to research and produce standardized powdered psilocybin mushroom API products. Moore explains this partnership will allow Havn Life to build on its supply chain of APIs while the company waits for its dealer’s licence to be approved by Health Canada. He says that a dealer’s licence is usually granted in 270 days, but Health Canada was currently overwhelmed with other priorities. “We didn’t want to delay our ability to participate in the industry,” Moore tells Truffle Report.

“Our primary focus is still on the build-out of our facility in Vancouver. That will be a facility for cultivation, extraction, refinement, and preparation of doses of APIs in Vancouver but Jamaica is an opportunity for us to validate some of those protocols and procedures and expedite our timeline to ship products to some of the entities we have strategic supply partnerships with. The Canadian facility can’t produce anything until our dealer’s licence is granted.”

Moore says Havn Life chose Jamaica over other countries where the production of psychedelics is allowed with certain restrictions, such as Brazil, Portugal, and the Netherlands, because Jamaica is closer to Canada and an English-speaking country. “Thirdly, it’s not a bad place to have to spend a bit of time,” he says. “Jamaica is a beautiful country and they are terrific people. Our team is very much enjoying their time there as well as getting work done.”

Moore adds that having this partnership in Jamaica would allow the company to explore further opportunities with the veterans health non-profit Heroic Hearts Project. “They offer retreats for veterans in Jamaica, so there’s a convenience there for us to be able to partner with them on the supply of psilocybin for those veteran’s retreats,” he says.

Among its partnerships, Havn Life is working with non-profit groups such as the Westwood Institute and the Heroic Hearts Project to advance research on psychedelic interventions for veterans suffering from mental health issues such as PTSD. Moore says Havn Life, through board director and Canadian Armed Forces veteran Tim Laidler, has built partnerships with veterans’ associations in Canada, the United States, and Europe. “The need is the same everywhere,” Moore says.

“We’ve had more veterans commit suicide than soldiers die in Afghanistan — there were 153 Canadian soldiers that died there and we’ve had 180 suicides because it’s a group that has issues that aren’t well dealt with by existing therapies and drugs. This group is in need of support. We are hoping an appropriate protocol is developed so that more veterans can get treated and we can stop this very sad pattern of behaviour.”

The Next Five Years for Havn Life Sciences

Looking forward, Moore tells Truffle Report that Havn Life will be pursuing objectives on both sides of its parallel strategies: pharmaceuticals for psychedelics and the retail side for natural health products. “Over the next five years, we will have our lab build-out and be in production of doses of API to support researchers and formulators and be doing that in multiple countries exporting from our facility in Vancouver, and leveraging the facility in Jamaica,” he says.

Moore says Havn Life also expects to build a significant brand in the functional food space with the launch and growth of the company’s range of natural healthcare products. “They are helpful for cognitive health and performance, for things like focus, sleep, immunity, and clarity of thinking,” he explains. “Over the next five years, our objective is to build our portfolio into more categories such as functional foods and build out our retail footprint in Canada, the United States, and Europe. We expect very significant business in that space, leveraging the expertise we have from the psychedelic and pharmaceutical side for consumer education and insights on formulas that are unique and offer benefits to help people.”

Speaking about the future of the psychedelics space, Moore says the stigmas around mental health have been reduced and policymakers were now recognizing the opportunities for psychedelic therapies for mental illness, for example through decriminalization in a number of American states. “But I don’t expect we are anywhere near a time when there will be a psilocybin dispensary network in Canada where you can just walk in and buy a dose, I don’t see that happening,” he says. “It’s going to continue to be treated as a pharmaceutical, initially as part of psychedelic-assisted therapy, and then ultimately as microdoses that people will be able to self administer. That will be done through a doctor with a prescription.”

Moore adds: “as an industry, we need to recognize we are not looking at the recreational side of this at all. I don’t advocate the recreational use of psychedelics and I think their use as a serious medicine for people that have serious illnesses needs to remain the focus of the industry.”