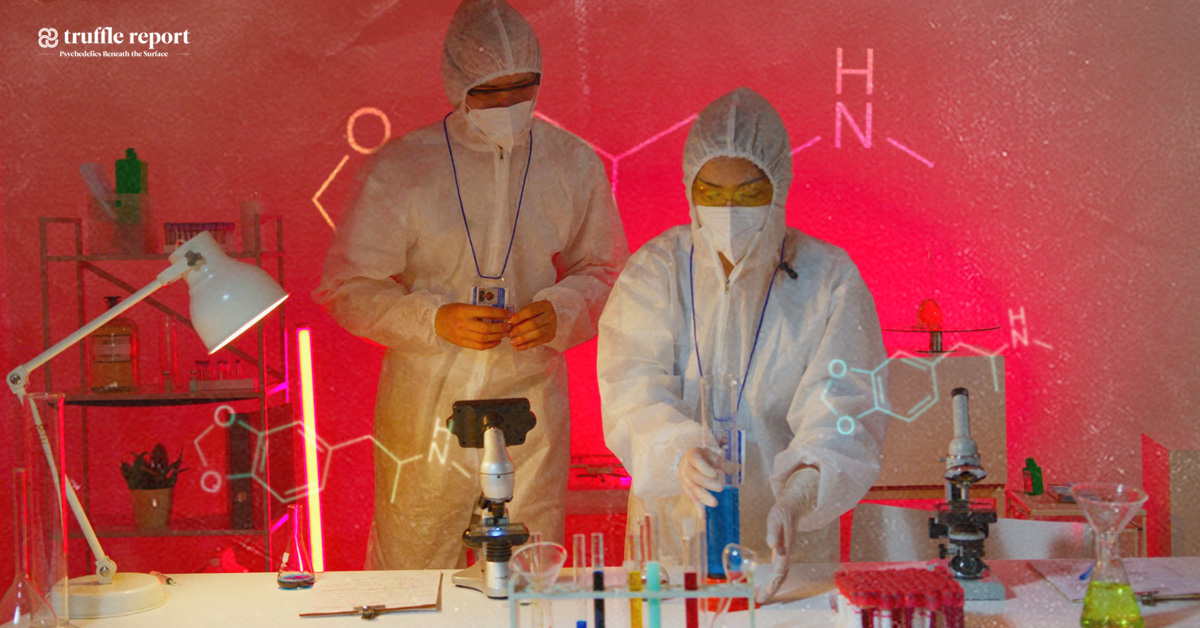 Getting Ahead of the Psychedelics Supply Crunch

Those of us that have complained about pandemic-related supply chain issues have nothing on researchers who are trying to work with psychedelics.

With more psychedelic research studies underway than ever before, there has been increasing demand for these drugs, both in the form of lab-manufactured and naturally sourced psychedelic compounds.

One company that has stepped up to meet these supply chain challenges is Canadian biotechnology company PharmAla Biotech, the only Good Manufacturing Practice (GMP) certified manufacturer of MDMA in North America.

Preparing for an Increase in Demand for Psychedelics

PharmAla’s CEO Nick Kadysh tells Truffle Report that, through its own research and development (R&D) work, his company discovered there is a huge supply crunch when it comes to access to active pharmaceutical ingredients. “With the boom in psychedelics, there are a lot more companies who need access to these molecules,” he explains.

“That’s why in the last year we’ve set up ourselves as a supplier, and we are at this point the only GMP, clinical-grade manufacturer of MDMA in North America.”

Kadysh says PharmAla is currently waiting for the market to grow so the company can fulfill more demand.

“We tried hard to build a process that is scalable so that we can not only fulfill demand today but fulfill demand far into the future,” he explains.

“Most companies that are purchasing MDMA from us are using it for Phase II trials which are relatively small, maybe 30 people. But there are a large number of them.”

But Kadysh says the real supply crunch is yet to come.

“When folks start doing Phase III trials, that will require an extensive number of active pharmaceuticals, because they are assessing hundreds of people, not dozens,” he explains.

As the industry matures, Kadysh says there could soon be 50 companies producing GMP certified MDMA in North America.

“The way I view it is that the more people that are out there trying to solve these supply chain problems, the better it is for everyone,” he says. “It means there are more molecules for research, research gets done more cheaply and better, and that’s a rising tide that lifts all ships.”

If the psychedelics sector were more like the pharmaceuticals industry, there would be a greater focus on chemistry, manufacturing, and control (CMC), Kadysh tells Truffle Report.

“I’m often asked why we are spending so much time making something that already exists (MDMA) when we have patents on new things that nobody’s ever seen before that might be better. The answer I always give is that manufacturing and R&D are two sides of the same coin — you can’t do good R&D unless you have quality control and your processes in place properly.”

He says companies need to have validated processes and data such as batch master files, lab books, and any other regulatory work required to prove that they are producing what they say they are.

“Part of the reason for the supply chain issues is that in psychedelics, we have a lot of folks who are not experienced in the pharmaceutical industry,” he says.

“[At PharmAla], we considered, if we were working for Pfizer and wanted to make a good supply chain for MDMA, how would we do it? Then we’ve spent the last year ticking all those boxes to make sure we had that and the partnerships in place to prove it to anybody who comes knocking, whether that be a customer, a competitor, or a regulator — anybody.”

Kadysh says he doesn’t see any huge challenges ahead in the establishment of global psychedelic supply chains. “It’s all very doable,” he tells Truffle Report.

But he notes that the biggest challenge is the fact that every country has different regulatory requirements, and no one person is going to have knowledge of how every system works.

A Look at the Vine Ventures/MAPS Funding Structure

In Canada, a company can import or export controlled substances provided they have received an exemption under the Controlled Drugs and Substances Act. A permit from Health Canada is required for each import or export.

Similarly, in the United States, a company must obtain a permit from the Drug Enforcement Administration (DEA) to either import or export controlled substances.

Kadysh says when PharmAla works with clients based outside of Canada, they take responsibility for gaining a Health Canada export permit if the client’s paperwork is in order. “But we say to our international client, they are responsible for their local regulatory processes, and they have to get the import permit,” he explains.

There are several other companies working on the supply side of the psychedelics industry. Two companies, Red Light Holland and Havn Life Sciences, are meeting the demand for naturally sourced psychedelic compounds in North America by importing psilocybin grown in countries with more relaxed cultivation regulations, specifically the Netherlands and Jamaica, respectively.

In September, magic truffle producer Red Light Holland announced that it had successfully carried out its second import and sale of mushrooms from the Netherlands into Canada, overcoming logistical issues such as maintaining temperature-controlled conditions as the mushrooms were transported across the Atlantic.

Just last week, Havn Life Sciences — a Vancouver-based company whose goal is to position itself as a supply chain leader — announced that it has successfully exported naturally-derived psilocybin from its facility in Jamaica into Canada.

Over in Denmark, synthetic biology company Octarine Bio is taking a different approach to the growing demand, producing psilocybin from sugar using fermentation. The company has partnered with a United Kingdom-based clinical research organization specializing in psychedelics, Clerkenwell Health, which will be using its psilocybin in human clinical trials. Octarine Bio hopes its unique and scalable production method could bypass the limitations associated with the traditional production of psychedelic compounds.

Kadysh says that while working on the supply chain side of PharmAla has been important, his real passion lies in the R&D of novel chemical entities. “If we can improve the toxicology [of MDMA], we can explore other protocols and other indications and we can help more people. Regulators are interested in that,” he says.

“In a lot of ways, synthesis is harder [than growing and extracting active molecules], but we’ve welcomed that challenge because it meant we could develop expertise no one else has, and it has made us a little bit unique. We are really excited to share more in the coming months about some of the new stuff we’ve been working on and how it can help people.”

He tells Truffle Report that PharmAla is on track to go public in January on the Canadian Securities Exchange (CSE) under the very appropriate ticker symbol MDMA.