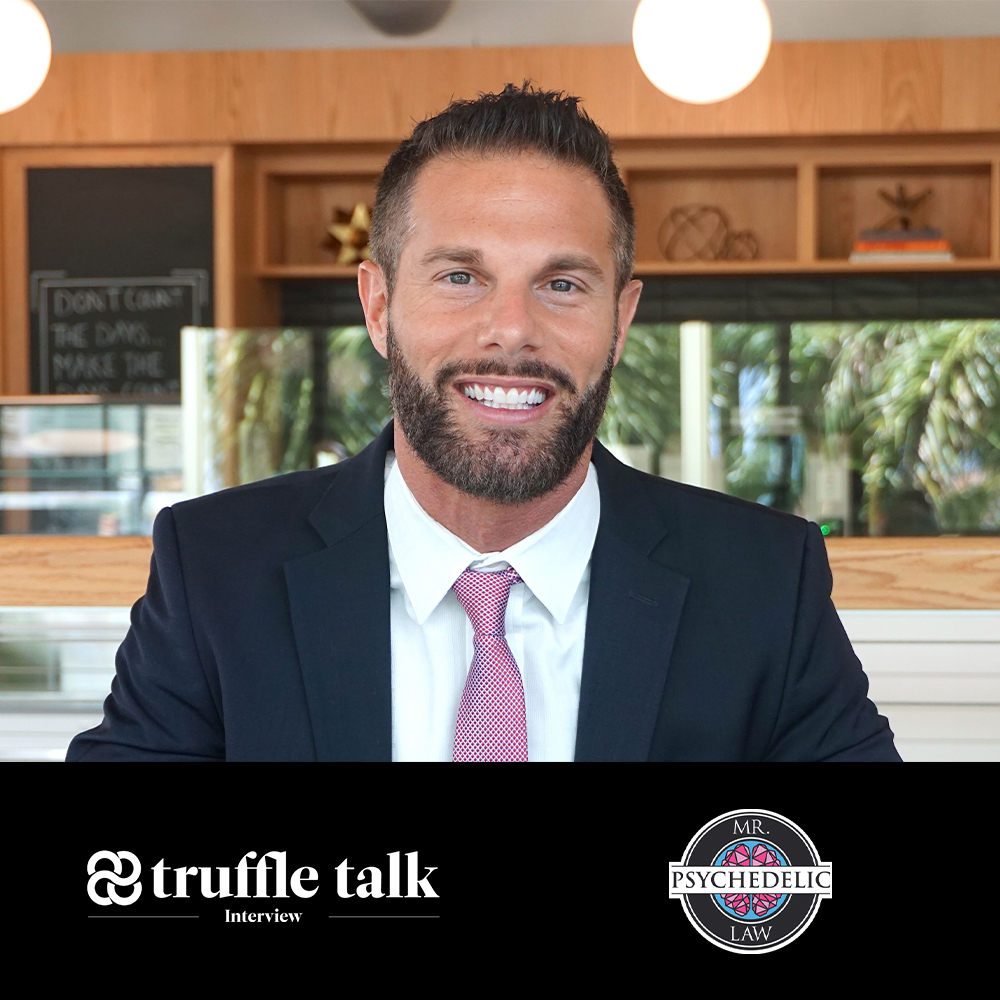 Truffle Report got in touch with Dustin Robinson, co-founder of Mr. Psychedelic Law, to talk about the recent psychedelic legalization and decriminalization trends in the United States as well as his role in the constantly evolving psychedelic legal landscape. Mr. Psychedelic Law is a non-profit repository of lawyers, medical, scientific, and spiritual experts, working towards driving a “responsible legal reform in Florida for psilocybin.” Robinson worked with Representative Grieco in part to design the first draft of the state psilocybin bill.

The bill HB 549 notes ways of ensuring equitable access to psilocybin, which under the proposed model, will be administered by licensed service centres or facilities.

“Unlike Oregon, I have put down a language in the bill related to telehealth using virtual sessions to the administration of these substances,” Robinson says. He adds that virtual therapy would help reduce the cost of one-to-one therapies where a person can have a therapist remotely, and where a designated sitter is present with the patient at the time of consuming psilocybin. “There’s going to be rules around it but what I am envisioning is that you have to designate a sitter to be there with the person. It will hopefully drive some equity and help reduce the cost,” he adds.

Moreover, if the decriminalization language added in the first draft is approved in the legislature, Robinson says, “I can see a world where home-grow is allowed.” Considering the cost-effectiveness related to the requirement of land or labour in the production cycle, it’s a possibility that residents of Florida may be allowed to grow their own psilocybin mushrooms for the therapy.

Florida isn’t an isolated case. The U.S. is seeing a gradual shift in drug policies at the local and state levels as grassroots organizations and activists continue to fight against deeply flawed War on Drugs policies. Many jurisdictions are gearing up to take on the fight at a larger level after Oregon became the first state to decriminalize possession of all drugs and legalize psilocybin-assisted therapy in November 2020.

“Three things are happening,” Robinson says. He explains: “There is decriminalization happening at a city level. From a state perspective, you have states like Oregon that are creating a legal framework. Third, which is the most interesting is that FDA [Food and Drug Administration] has designated MDMA and psilocybin as ‘breakthrough therapies’.”

Various cities and jurisdictions including Denver, Oakland, and Washington D.C. have successfully pushed their local governments in making possession of entheogenic plants and fungi the lowest priority of law enforcement. While this is the most prevalent scenario, some city councils like that of Somerville, Massachusetts also decriminalized possession of all drugs.

On the state level, Oregon is the first state to lead the wider-scale movement. Oregon entered a two-year development programme dedicated to developing a legal framework within which licensed practitioners will be able to provide services in a safe environment.

Talking at greater length about FDA designations, Robinson says, “unlike the cannabis industry, you’re seeing that the FDA is working more preferentially for some of the psychedelic substances as compared to cannabis.”

Robinson explains that “The difference between psychedelics and cannabis could be broken down like this: the cannabis industry is mainly driven by the recreational use of cannabis, and I think, as the industry develops, you’re going to see moving towards recreational. In contrast, the psychedelic industry is mainly driven by science, research, and the pharmaceutical industry.”

He continues, “The way I see the psychedelic industry progressing is through the biopharma framework compared to the cannabis industry which is being driven by the recreational consumer-brand type market.”

All these changes combined are slowly advancing larger drug policy reform in the U.S. That reform is also likely to be surrounded by uncertainties for the immediate future, depending on the benefits of psychedelic-assisted treatments that are yet to surface from the ongoing MDMA and psilocybin studies, and stigma related to drug use in communities across the country.

“It’s going to be very hard,” Robinson says of federal-level changes in drug policies, but he also hinted at some positive shift that the Biden administration is capable of making, considering his son’s struggles with opioids and the public knowledge of his ibogaine treatment. “I don’t think it is unrealistic that there’s going to be some change in the next four years,” Robinson adds.