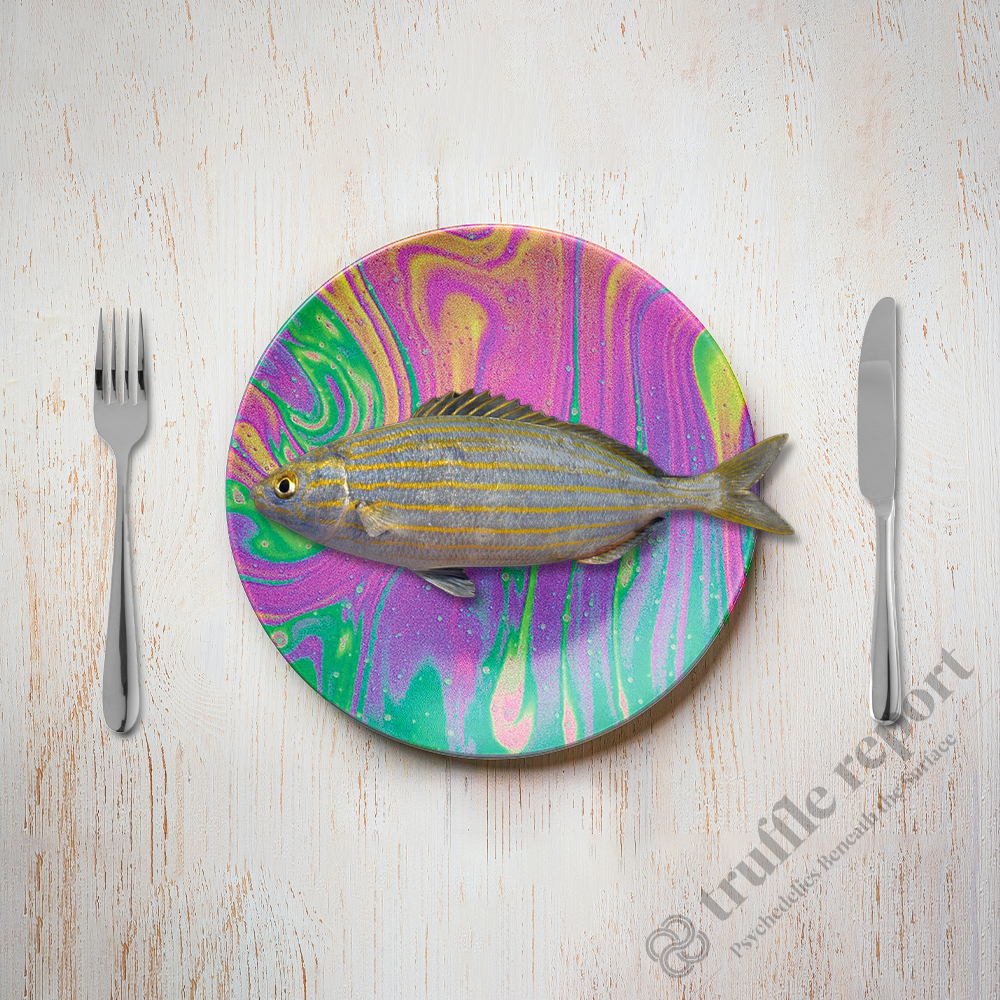 Fish and Trips: Psychoactive Denizens of the Deep

Recently, Truffle Report discussed amphibians that secrete psychoactive peptides and compounds. In the course of that research, we discovered that the world is a big place with lots of creatures, and that frogs and toads are not the only varieties of fauna that can send you on a trip. There are many sea creatures that occasionally cause hallucinations and other bizarre effects when eaten. Unlike amphibians such as the giant tree frog or the Sonoran desert toad, the mechanisms behind these psychoactive fish are still not entirely understood.

These symptoms occur shortly after eating the fish and may continue into the following day. Varieties of fish that can produce these effects include:

The hallucinatory effects of several of these are most often experienced if the fish is eaten raw, but may still infrequently occur if the fish is eaten cooked. Whichever toxins produce ichthyoallyeinotoxism seem to be localized to different parts of the fish’s body —mostly the head.

This type of poisoning is extremely rare and varies in frequency even within the same species. Depending on the species and the area they were caught in, the effects may occur more frequently during different seasons. For these reasons, researchers have theorized that the fish concentrate toxins absorbed when they consume different varieties of algae, rather than producing them endogenously. Because of the unpredictability associated with rates of infection, experiencing hallucinations through ichthyoallyeinotoxism would be difficult —and inadvisable to say the least— to attempt recreationally.

A study from 2006 examined ichthyoallyeinotoxism experienced by two men who had eaten salema porgy on the French riviera. One of them had begun to see visions of giant arthropods while driving home, and the other had and experienced auditory hallucinations of bird screeches and human screams. These cases point to one of the more unique characteristics of visions caused by ichthyoallyeinotoxism —which is that the hallucinations tend to be zooptic, often containing animals or animal sounds.

A notable example of ichthyoallyeinotoxism being woven into a cultural fabric is the Hawaiian yellowstripe goatfish, also known as the “nightmare weke”. A Hawaiian legend describes the goddess Pahulu, who exerted sorcery through the power of dreams. One of Pahulu’s incarnations was a male god of nightmares and evil spirits, and a version of this legend tells of Chief Kaululaau of Maui slaying him. In this story, Kaululaau distracts Pahulu using his reflection in a spring before bashing him over the head with a rock. Pahulu’s spirit is said to have travelled through the water and into the goatfish, possessing those who eat it.

As with other examples of this kind of poisoning, instances are relatively rare and occur mostly when the head of the fish is eaten. Unlike the salema porgy, this happens more frequently during the summer months, rather than autumn. Infections usually present the sufferer with nightmares, lending credence to the aforementioned legend of Pahulu.

In spite of their genetic longevity, history has not been kind to sea sponges. In ancient Rome, their spongy, fibrous bodies were apparently used as toilet paper. They were heavily fished off of the Florida Keys to the point of near-extinction for their application as a skin exfoliant. Even more recently, Gwyneth Paltrow has encouraged women to clean and use sea sponges in lieu of tampons. But while Alexander Shulgin noted in his writings on tryptamines that the psychedelics 5-Bromo-DMT and 5,6-Dibromo-DMT were present in the bodies of certain sea sponges, the difficulty in extracting these compounds makes it unlikely that sea sponges will be exploited to obtain these as well.

As with fish that cause ichthyoallyeinotoxism, research on the effects of these DMT derivatives are relatively sparse. Exactly how the sea sponges produce them is not yet well-understood. There have been anecdotal reports online of their psychoactive effects, with one animal study noting that 5-br-DMT reduced locomotor function — consistent with animal studies that used DMT or 5-MeO-DMT. The study suggested that it may have sedative or anti-depressant applications. As our knowledge on these aquatic tryptamines broaden, however, it’s likely that synthetic versions will be more viable than biological extraction from sea sponges.

Mysteries of the Deep

Like the depths of the ocean itself, its psychoactive offerings still remain elusive and mysterious. Some theorize that ichthyoallyeinotoxism is just another form of ciguatera, another food-borne illness resulting from the concentration of toxic chemicals in fish from consuming certain algaes. The symptoms experienced by sufferers in each form of poisoning are widely disparate, however, with ciguatera producing acute physical symptoms that may continue to affect an individual for weeks or even years. Ichthyoallyeinotoxism symptoms have generally only been known to last for a few days and primarily revolve around hallucinations and nightmares.