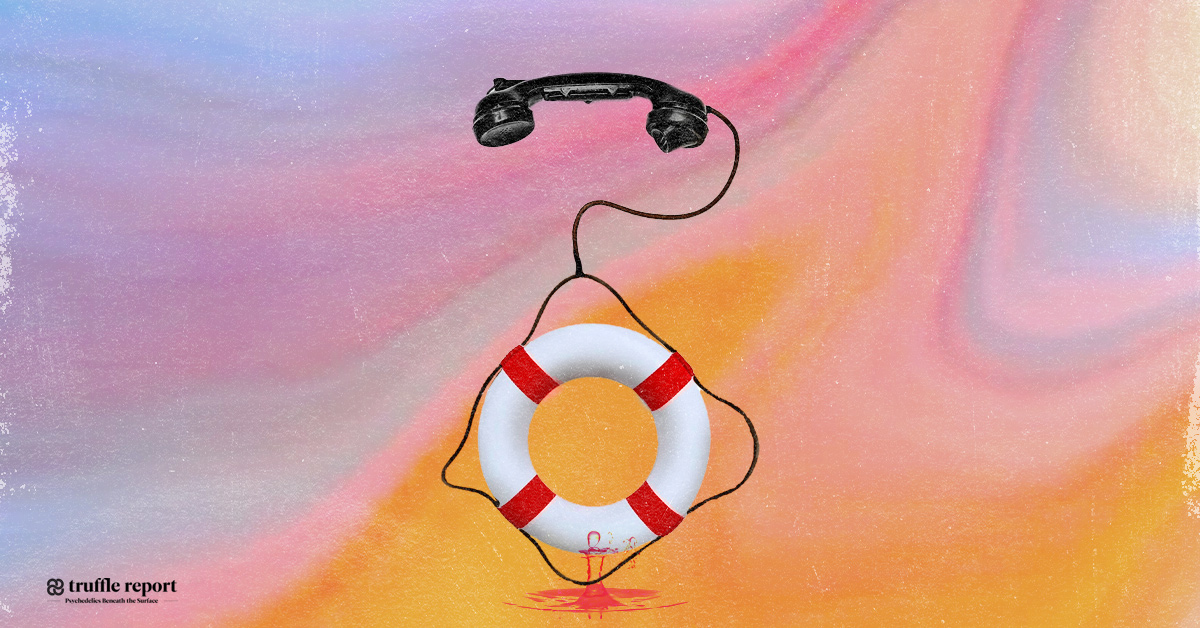 The world felt upside down at the start of the pandemic. COVID-19 ruled the news cycle, along with George Floyd’s murder and subsequent protests, and massive fires on the West Coast of the United States. It was, and still is, easy to feel a little apocalyptic about all of it.

“I really was feeling deeply depressed. The feeling that I really had was that the world was going in a terrible direction, and it was coming apart,” says Joshua White.

Joshua White is the co-founder and executive director of Fireside Project, the first-ever psychedelic peer support helpline that aims at working towards reducing risks related to psychedelic experiences. This San Francisco-based non-profit organization is now a Google search away for anyone across the U.S. who is having an intense trip or is still processing a previous psychedelic journey.

It all started with a revelation at the onset of the COVID-19 pandemic. “I asked myself if now isn’t the time, when I’m going to do everything I possibly can to try to make the world a better place?” questioned White.

“I asked myself ‘what gives me hope?’. The answer was psychedelics,” White continues, “What’s the biggest impact I could possibly have on the psychedelic movement given my own skill set?”

White, a former lawyer, has been involved with psychedelics for over 15 years, volunteering for non-profit support line in San Francisco, as well as the Zendo Project — a professional harm reduction education and support group. Holding space during someone’s most vulnerable moments and witnessing healing at festivals like Burning Man and  Lightning in a Bottle helped him to realize the power of peer support.

“Even though it wasn’t psychotherapy, it still was very therapeutic for them,” White recounts. “I saw there was a powerful health equity component to support lives, and that it’s totally free.”

COVID-19 and the related restrictions on social gatherings meant there would be no more festivals for months to come. It also meant that those in need of support during and after their powerful psychedelic journeys wouldn’t receive that component which White felt was so vital. Meanwhile, the pandemic unleashed a tsunami of mental healthcare crises across the globe. ‘During the pandemic, about 4 in 10 adults in the U.S. have reported symptoms of anxiety or a depressive disorder, a share that has been largely consistent, up from one in ten adults who reported these symptoms from January to June 2019,’ says a study published in February by Kaiser Family Foundation.

“So, I thought to myself, that creating a support line for psychedelics and asking people to commit to work for a full year on the support line could be one of the greatest opportunities ever to exist within the psychedelic space,” White shares with Truffle Report.

How’s it Going: Lessons From the First Quarter

Over the course of three months, Fireside has attended to at least 454 individuals, helping them during their trips, integration, and even in unravelling the effects of microdosing. Out of the 454 calls and messages received, White shared that 277 were de-escalated from moments of psychological distress. He quoted the preliminary study being conducted by the University of California San Francisco School of Medicine which is exploring the risk reduction potential of the psychedelic peer support line.

On one of the nights when White was volunteering on the support line, an individual reached out during their ayahuasca trip. White shared that “peer support” is having the ability to relate to another individual’s experience, who’s going through a similar journey during or after taking psychedelics.

“Being able to say ‘Yes, I’ve taken ayahuasca and I have a sense of what you’re going through is the moment, in my experience, where trust is built and the connection is forged,” White says.

Psychedelics have a tendency to amplify emotions, and in some cases, bring an individual’s central fear to the forefront of their mind, White says, going back to that night. “The call lasted about a couple of hours. There were a lot of tears that were shed,” he recalled. “The next morning, I woke up and someone had donated to the support line with a note that said, ‘Thank you so much, Josh. You truly saved me.’,” he shared.

Out of 95 post-call survey responses to the Fireside peer support line, 28 people said that they would’ve gone to the Emergency Room or called 911 if the helpline wasn’t there. Another 28 individuals claimed that they didn’t indulge in self-harm because of the peer support line.

Peer support is a different model. It is not a hotline, and it does not replace therapists. An individual does not have to be in a crisis to reach out to the Fireside peer support line.

“We’ve often been referred to as a hotline. And that’s really not the correct terminology,” White says.

He explains why: “The reason I always push back against it is because I think when people think of a hotline, they think that a person has to be in crisis. They think that it’s like a suicide hotline. But for psychedelics, you really have to be in that elevated state. We support people who are tripping but also those who are not in crisis.”

Growing popularity around self-medication with psychedelics through pop culture, including the Netflix shows like Have a Good Trip and Michael Pollan’s book How To Change Your Mind, is changing the narrative around the once-stigmatized substances. While more people are being drawn to psychedelics, it’s becoming necessary for helplines like Fireside to hold space for integration, and to have open conversations about spiritual experiences, or life-changing realizations.

However, the support line is not for people looking to learn about psychedelic experiences. “If someone calls in before a trip, we will refer them to sources of information, but we can’t support them,” White says. “That’s not because we don’t think preparing for a psychedelic experience is important. It’s of course vital. But we want to make sure that no one misconstrues anything we say as encouraging them to engage in illegal conduct.”

“Canada Will be the First Country That We Expand to…”

“We see ourselves as a foundational risk reduction service because we are available to help everyone for free,” White says.

Psychedelic decriminalization efforts have been gaining momentum across the country, with a major bill being discussed in California, where Fireside Project is based. While psychedelics emerge as potential public healthcare substances, the related risks would require education for risk reduction and peer support groups.

“That’s where risk reduction services operate. And we see ourselves as a critical part of what I hope will be a robust risk reduction infrastructure,” he says.

The Fireside Project was first officially announced in November 2020. Now, as the peer support line is approaching its first anniversary, White shares that the helpline will be expanding to a seven days a week, 12 hours a day working schedule. Besides that, the organization would be launching an app early in August for better access to support line services.

“I think it’s been remarkably successful,” White says, looking back.

The organization is currently working 52 hours a week, from Thursday to Sunday 3:00 PM to 3:00 PST. By November, the team would be taking calls 84 hours a week.

In recent news, the organization also announced that leading psychedelic researcher Dr. Robin L. Carhart-Harris, would be joining their Advisory Board.

In terms of geographical expansion, White says that he eventually hopes to expand in every country of the world and offer services in multiple languages. “Canada will be the first country that we expand to. We’re not sure yet what the timeline is for that, but it’s something we’re actively considering,” White says, adding that he can’t disclose much since it’s a work in progress.