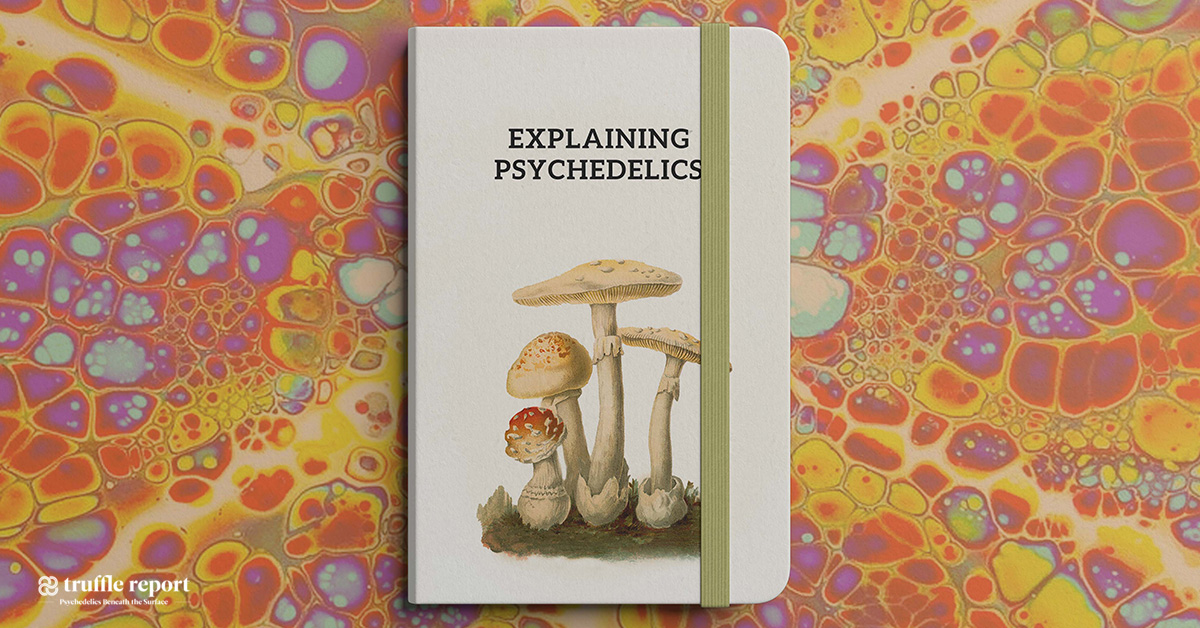 Last week, Truffle Report began our explaining psychedelics series with some relevant definitions for commonly used terms in psychedelic science, journalism, and cultural conversations. We realize that understanding and demystifying these terms is half the battle. This week, we’re happy to bring you the second installment.

In simple terms, the Default Mode Network, or DMN, is a set of interacting structures within the brain. The default mode network connects areas of the cerebral cortex with deeper and evolutionarily older parts of the brain that are involved in emotion and memory.

It is called the “default” mode network because it is most active when the brain is in a resting state. Its key structures include and connect the posterior cingulate cortex, the medial prefrontal cortex, and the hippocampus.

Increased activity of the DMN is related to mind-wandering and the capacity to imagine mental states in others, as well as the ability to mentally “time travel”, imagining ourselves in past or future scenarios. During psychedelic experiences, activity in the DMN decreases, and when it does, users commonly describe a dissolution of their sense of self. Psychedelics disrupt the activity of the DMN, which can lead to a change of negative thought patterns.

MAPS is the Multidisciplinary Association for Psychedelic Studies. It is a nonprofit organization that was founded in 1986 by Rick Doblin with the purpose of increasing the general public’s understanding of psychedelics and supporting psychedelic scientific research.

According to the MAPS website, founder Rick Doblin had his first experience with LSD in the 1970s. This provided him with a glimpse of the profound connection between heart and mind made possible by psychedelics, which made him want to explore these substances even further. Since 1986, MAPS, based in Santa Cruz, California, has played a key role in the renaissance of psychedelic research. They have dedicated the last 35 years to changing the way people think of, talk about, and consume psychedelics through research, education, and advocacy.

Neuroplasticity is the brain’s ability to adapt, modify, and change structure through the growth and reorganization of neural networks. While the concept may sound complicated, it is not. Neuroplasticity happens constantly. We build new connections between our neurons every time we learn something new. To adapt to new situations, we rewire our brains. This happens on a daily basis, but it is also something that can be promoted, stimulated, and enhanced by more conventional means as well as psychedelic substances.

Psychedelics have been shown to promote neuroplasticity, which is one of the reasons they could be used to treat mood and anxiety disorders in the future.

A phrase that is starting to be more common in explaining psychedelics, particularly drug development, is the term orphan drug designation. This regulatory designation tends to emerge in articles involving rare diseases that don’t yet have an approved pharmacological treatment. Orphan drug designation is a special status that is granted to a drug or biological product under the Orphan Drug Act (ODA).

In order to receive orphan designation, a drug must be designed for the treatment, prevention, or diagnosis of a rare disease. This means that it has to be a condition that affects fewer than 200,000 people in the United States, or it must meet the cost recovery provisions of the act (FDA).

Clinical trials and medical research are one of Truffle Report’s favourite topics to explore when explaining psychedelics. We often come across designations for Phase I, II, III or IV of trials, but what do these numbers really mean?

Phase I clinical trials are designed to establish the drug’s initial safety and viability in humans. To achieve this, the substance is given to a small number of healthy volunteers to test for side effects and determine what the safe dosing range might be. Phase I trials are also looking at what the drug does to the body and what the body does with the drug. In this stage, safety is the main concern and outcome. Placebos are not involved here.

If a drug is found to be safe in Phase I clinical trials, a Phase II trial is conducted to test if it works on a particular conduction. Phase II clinical trials are the first in which the drug is tested in a small group of volunteers with the disease it is meant to treat. These trials study the safety and efficacy of the drug across a range of doses. Because the number of volunteers involved is very small, conclusions about overall efficacy can’t be drawn at this stage, but Phase II trials can provide insights on how to optimally design larger Phase III trials.

Treatments that have been shown to work in Phase II clinical trials must pass a final phase before being approved for consumption in the general population. This final phase is known as a Phase III clinical trial, also known as pivotal trials. Phase III clinical trials assess the novel treatment’s safety and effectiveness against the current standard treatment. They also test its safety and efficacy in a larger group of patients. In order to offer enough evidence of efficacy, at least two successful Phase III trials are usually required. Because of the required large number of patients, Phase III trials are often multi-centre and international.

Finally, after the medication has been approved by the FDA, a Phase IV trial is conducted. Phase IV trials are used to monitor these drugs over a long period of time. Even after thousands of patients have been exposed to a new therapy, not all of the treatment’s side effects are understood, and certain questions remain unanswered. This phase is necessary in order to keep track of a drug’s long-term effects.

We often see the words psilocin and psilocybe when explaining psychedelic mushrooms. To understand these terms better, we should start from the broader definition: psilocybe. Psilocybe is a group, or genus, of over 200 gilled mushrooms, about half of which produce psilocybin and then psilocin. Of the two psilocybin is a prodrug, meaning it is metabolized into psilocin in the body. When psilocybin-containing psilocybe mushrooms are bruised, they release psilocin, which gives them a bluish tone.