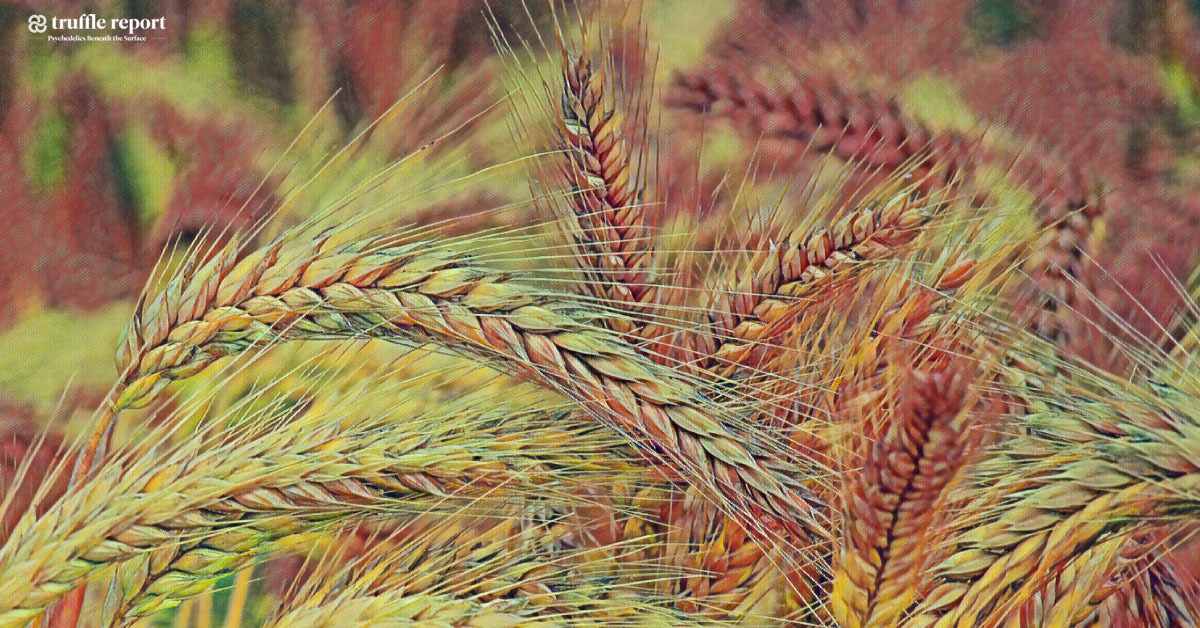 First synthesized by Albert Hofmann in 1938 before its turbulent history as a countercultural drug and a controlled substance, LSD is a fairly recent addition to mankind’s pharmaceutical repertoire. Hofmann did not just synthesize LSD out of thin air, however — it is actually the product of his years-long research on a very old fungus called C. Purpurea, otherwise known as ergot. Like LSD, the consumption of ergot may cause hallucinations along with a variety of more dangerous symptoms.

Ergot is a fungus that is best-known for infecting rye crops, but it also contaminates other cereals like sorghum and millet. When these crops become infected with ergot, dark violet sclerotia appear among the ordinary grains and the plants’ reproductive organs are damaged. Unless they are harvested, these poisonous purple “grain kernels” fall to the ground and sprout fungi throughout winter that produce spores and perpetuate crop infection the following spring. For this reason, ergot was common enough to be considered an ordinary part of rye plants and ended up being consumed frequently throughout European history.

Ergot fungus contains a cocktail of poisonous alkaloids that can give rise to a wide berth of unpleasant symptoms, depending on the individual. These infections are known as ergotism and cases are classified as either convulsive or gangrenous.

Gangrenous ergotism was originally known as “holy fire” or “St. Anthony’s fire”. Due to the unknown cause of the infection when it was first observed, it was considered by many to be a form of divine punishment. Gangrenous ergotism is characterized by a painful burning sensation in the victim’s extremities, followed by a “mummification” of the afflicted limb before it eventually falls off. This is the most deadly presentation of ergotism.

Convulsive ergotism, from the perspective of psychedelics and hallucinogens, is the precursor to the effects sought after by LSD users. Having said that, this infection is far less pleasant than an LSD trip. Along with nightmarish hallucinations, sufferers of this infection may find their bodies undergoing painful contortions. Due to the extreme muscle contractions that convulsive ergotism causes, it can also cause pregnant women to miscarry.

Research and Medical Uses for Ergot

As dangerous as ergot can be, it has medical applications. Among the many hazardous alkaloids that occur within ergot sclerotia, there are also the compounds ergotamine and ergonovine —used in the treatment of migraines and postpartum hemorrhaging respectively. Other, less supported, medical uses for ergot include the treatment of excessive menstrual bleeding because of its tendency to narrow blood vessels. From the 16th century onward, midwives had used ergot to induce labor, but this practice stopped because of the severe side effects and bleeding it was known to cause.

Ergot in rye was not suspected as a cause for ergotism until around 1670, when a French physician noticed several discrepancies between ergotism and ordinary contagious infections:

He noticed the ergot in the rye plants while he was investigating and treating the infections, but farmers did not believe his theory that the purple grains were harmful. In 1853, Louis Talasne finally identified ergot as a fungus that did not occur naturally in rye plants.

In the 1930s, lysergic acid was isolated as the common active agent between ergot alkaloids and Albert Hofmann started his research into its potential medicinal uses. He experimented with many lysergic acid derivatives before synthesizing LSD-25 as a potential respiratory and circulatory stimulant. Although its effects appeared to be fairly benign during animal testing, Hofmann would try it five years later and experience its hallucinogenic effects himself. Luckily, in spite of the fact that Hofmann briefly imagined that his neighbour was a witch, these hallucinations tended to be far less “hellish” than those caused by convulsive ergotism.

Ergot has existed for as long as rye plants and rye cultivation have been widespread. The first known outbreak occurred in 857 CE within Germany’s Rhine Valley. A 1039 CE outbreak in France resulted in a hospital for victims being erected and dedicated to St. Anthony — hence the name “Saint Anthony’s fire”.

Since the cause of ergot poisoning was not understood until fairly recently, and infection was so common, theories abound on the role ergotism may have played in many historical events. These include:

In fact, one of the more well-known theories concerning ergot outbreaks concerns the 1692 witch trials of Salem, Massachusetts. In 1976, Linnda Caporael suggested that the rainy conditions of the year prior to the trials might have facilitated widespread ergot growth among Salem’s rye crops. The young girls who were thought to have been attacked by witchcraft may actually have eaten contaminated bread and experienced the demonic hallucinations commonly attributed to convulsive ergotism. This theory has been disputed since it does not explain why the victims were only young women or why they only experienced convulsions and hallucinations.

Since the cause of ergot poisoning was unknown for so long and records are spotty, it’s difficult to prove or disprove any of these theories. Thankfully, recent agricultural developments have made ergotism infections uncommon —but it’s still difficult to say how they may have influenced the events of the past.