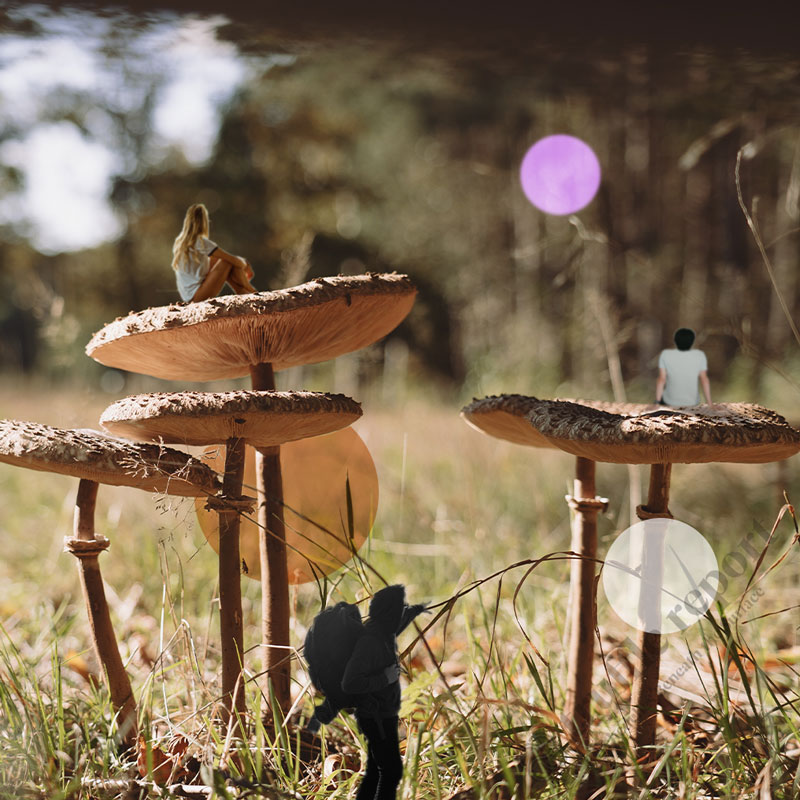 One of the biggest discouraging factors for emerging psilocybin therapies (aside from legality) is the prospect of a bad trip. Experienced psilocybin users may be more willing to accept this risk, but more uncertain individuals who find the idea of a psychological ordeal unappealing may choose to avoid psilocybin altogether despite its increasing viability as a mental health treatment.

The question of how to deal with a bad trip will be a deciding factor in how many of these prospective treatments are structured. MindMed’s “LSD off-switch” hopes to address this problem for LSD by providing therapists with a method to bring patients’ trips to a halt. For psilocybin treatments, CaaMTech has been developing a psychedelic mushroom derivative that may dramatically reduce the odds of experiencing a bad trip at all.

Based in Issaquah, Washington, CaaMTech has been researching minor tryptamines found in psilocybin-containing mushrooms. The goal of this research is to synthesize specific blends of derivatives from these species that can offer different effects for therapeutic purposes —similar in theory to how minor cannabinoids behave in the many strains of cannabis that are currently available for different recreational or therapeutic purposes. Under a collaborative agreement with the Leibniz Institute in Germany headed by mycologist Dr. Dirk Hoffmeister, they are investigating the chemical variability present throughout different strains of psilocybe mushrooms. As opposed to treatments that focus on pure psilocybin, this research will investigate a potential entourage effect between several mushroom tryptamines.

Their research has yielded two new tryptamine compounds — Prophoria and Amphoria —that may have medical applications for treating patients with psilocybin in a more predictable, less chaotic way. The research is ongoing, but these may make it possible to eliminate the possibility of a patient experiencing a bad trip. They are based on aeruginascin, a rare minor tryptamine found in a species of mushroom called Inocybe Aeruginascens, which also contains psilocybin.

While in-depth research has only begun recently, aeruginascin was first observed and named in 1980 by German mycologist Jochen Gartz. Gartz noted that upon accidental ingestion of I. Aeruginascens, subjects reported a much higher frequency of pleasurable psychoactive effects. Aeruginascin is the suspected cause of this phenomenon. Conversely, some also suspect that it causes a condition known as wood lover’s paralysis (WLP), a rare side effect of psilocybin ingestion that may cause temporary paralysis in psilocybin users. There is practically no research, however, that proves that this is true and Gartz claimed that it was just a myth. CaaMTech CEO Andrew Chadeayne, while speaking to Vice, noted that it was possible because of aeruginascin’s structural similarity to bufotenidine, a tryptamine found in some species of toad which is known to cause occasional paralysis. He also pointed out that there is no current research that confirms a causal effect between aeruginascin and WLP.

Chadeayne’s research at CaaMTech has unearthed a significant difference between bufotenidine and aeruginascin. Aeruginascin is a prodrug (meaning a compound metabolized into another substance after administration) to the psychoactive metabolite 4-HO-TMT, similar to how psilocybin is a prodrug for the psychoactive psilocin. Chadeayne’s team investigated the serotonin agonist effects of 4-HO-TMT, suspecting that it would have an affinity for 5-HT3 receptors like bufotenidine. It turns out that despite their structural similarities, 4-HO-TMT is active at 5-HT2A receptors, just like psilocin.

Prophoria is CaaMtech’s synthetic analog of aeruginascin, while Amphoria is their synthetic formula of 4-HO-TMT. Animal testing is expected to begin shortly, which will hopefully help to determine whether or not aeruginascin and its metabolites can actually result in trips that are exclusively euphoric. The question also remains as to whether or not these compounds can cross the blood-brain barrier.

As promising as these compounds may be, we might still be a ways off from understanding their benefits fully.

Evaluating the Benefits of CaaMTech’s Research

Previously, Truffle Report discussed the potential benefits and drawbacks of MindMed’s LSD neutralizer. We included accounts from the famed psychiatrist and psychonaut Leo Zeff that argue for the benefits of experiencing a bad trip. CaaMTech’s new compounds present a similar dilemma. The benefits are obvious: without the risk of experiencing a bad trip, new patients may feel more at ease about taking psychedelics for the first time. It could also make psilocybin therapy more streamlined and predictable for the therapists themselves. However, Zeff argued for the “bad trip” as a generally rewarding therapeutic experience —as unpleasant as they may be in the moment.

In an interview with Psychedelic Times, author and martial artist Richard L. Haight echoed these opinions. His book, The Psychedelic Path, offers unfiltered accounts of Haight’s own experiences with psychedelics. Like Zeff, Haight claims that “bad trips” are really an opportunity to come to terms with aspects of your psyche that need attention.

“When you have a bad trip, it is revealing stuff that you probably didn’t want to look at — which is probably what you need to be looking at.”

Haight goes on to suggest that the therapeutic benefits of psilocybin and other psychedelics may dissolve over time if the darker parts of the unconscious continue to go unacknowledged.

‘“Why can’t I get back there?” The reason you can’t get back there is those anchors of darkness within you that you have not wanted to look at.’

Haight and Zeff both suggest that psychedelic therapy may be less effective and lasting if bad trips are avoided. These are important points to consider. On the other hand, it could be argued that therapy which is slightly less effective is better than no therapy at all. Like the LSD neutralizer, the true value of psilocybin —or aeruginascin— synthetics that only produce euphoric visions may turn out to be in how they are utilized. If or when these therapies go mainstream, maybe patients will even be able to choose which sort of experience is right for them —and there’s definitely value in that.