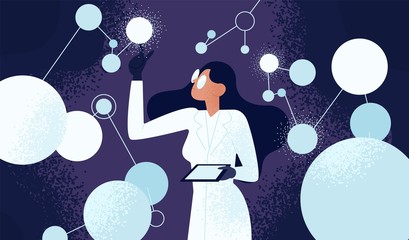 Drug Science’s Women in Psychedelic Science event was held virtually on March 24. It’s the third event in the series produced by Drug Science that covers both clinical research and fieldwork of women in the psychedelic space. The panel was opened by Jo Neill, Professor of psychopharmacology at the University of Manchester and chair of the Drug Science Medical Psychedelics working group at b-neuro.

“We’re seeking to redress the balance, reducing bias towards men in science, as we know the bias is there for a walk of life and including psychedelic science, so we’re aiming to put that right,” said Neill in her opening speech.

The first session of this panel was chaired by Professor Val Curran, founder and director of University College London’s (UCL) Clinical Psychopharmacology Unit and featured:

Ketamine Enhanced Therapy in the Treatment of Alcohol Use Disorder

Prof. Morgan shared her findings from the KARE trial. KARE, or “Ketamine for Reduction of Alcoholic Relapse” and was a project funded by the Medical Research Council. It explored a combination of a low dose of ketamine and psychological therapy as a possible treatment for alcoholism. The study ran from 2016-2020 and included 96 participants.

“One of the main things that emerged from our analysis was the kind of contradictory nature of ketamine experiences. One of the most common of these seemingly contradictory experiences were reports of detachment and disconnection dissociation, but also accompanied by a greater sense of connection,” she explained.

Patients reported feelings of the “body disappearing,” “being like an amoeba,” and “floating in space.”

“Ketamine does have its place in psychedelic therapist pharmacies by having a very different mechanism,” said Prof. Morgan. “I would say ketamine is great at inducing dissociation, and particularly from our body, perhaps because of its analgesic effects as an anesthetic, and inducing outer-of-body experiences.”

“It’s a difficult problem to treat. It tends to be a relaxing condition, so most people who manage to stop drinking will eventually relapse within a year. Part of that might be because many people with alcohol use problems have experienced trauma or adversity when growing up,” explained Dr. Higbed. “For people who use alcohol as a way of coping with emotional distress, it’s tough when they start, they stop drinking, coping strategies are taken away, and they fall out of options. Many do return to alcohol. Treating the symptom rather than the cause of the distress isn’t working.”

According to Dr. Higbed, MDMA helps to “reduce fear-arousal,” which makes trauma processing possible within the therapeutic context and allows “people to think about, talk about the difficult experiences without being emotionally overwhelmed.”

Mithoefer spoke about MAPS’ sponsored pilot study on MDMA in couples therapy. According to Mithoefer, MDMA in couples “enhances communication, increases openness to hear what the other person is saying, and also gives people the ability to address upsetting materials stuff that they may never feel like they could talk about before.”

“One of the beautiful things we saw was the willingness to discuss the trauma in a completely different way than they had to and to hear each other, meaning-making and work with stuck thoughts, and enhancing the relationship,” said Mithoefer.

Patients reported “self-awareness and understanding, increased well-being, increased empathy for others, improved relationships in the family and in general.”

The second session of this panel was chaired by Dr. Anne Schlag, head of research at Drug Science and featured:

Dr. Watts spoke about connectedness to ourselves, other people, and the world around us.

“If we set it up and seed it in line with the Earth code [cycles, rhythms, and patterns of nature], it will be incredibly positive. But if we violate these Earth codes, it could be very negative,” said Dr. Watts.

She highlighted the cycle of light and dark, “hunger for psilocybin.”

“The first is that certainly in the psilocybin studies at Imperial we saw some participants who had very difficult traumatic experiences with psilocybin having lots of trauma being brought up, and then struggling to integrate it for a long time afterwards,” she continued. “The other part of darkness I think that we overlook sometimes is that nearly all of the participants in psilocybin for depression studies became depressed again a few months after the study.”

“I’m focusing my attention on how we can start to build a container that has a light part, the joy, the connection nursing your spirituality, the bliss and all and the connection to others and all of that wonderful stuff but also the dark side, the pain, and the return to depression and how people can be supported on a journey that takes place over months and years,” she said.

Dr. Meckel Fischer talked about dosing and her experience using such substances as LSD, MDMA, and 2CB.

“Dosing is one of the cornerstones of the well-known equilateral triangle of doses, set and settings. The three are the same,” said Dr. Meckel Fischer.

Dr. Meckel Fischer also shared her insights on mixing substances, timing, and the importance of set and setting.

“Set and setting must never be lost from sight or sense. I’m convinced that one has to have a goal for a psycholytic session. I think that one has to engage in a relationship with a substance because we can’t just take them and use them. The relationship is necessary. We should use the dosages so that [patients] can always be in awareness at all times so that the findings and insights can be transferred to the consciousness and the body level,” she said.

“I was so scared of dying that I was looking up Dignitas, and I was thinking about other ways to make it easier for me to die, and death was near to me at that point. Fortunately, by an absolute miracle, I was able to get onto a trial a few months later,” explained Dr. Macdonald. “Absolute miraculous response to treatment because I had about a 25% chance of responding to immunotherapy. I did respond, and within six months, I had what’s called “no evidence of disease,” which is so wonderful. As a stage four cancer patient, that was hopeful.”

However, according to Dr. Macdonald, she was still “broken inside” when she came across a TED Talk by Roland Griffiths.

“I wanted to process my emotions, I wanted to process any trauma, so I signed up for a retreat in the Netherlands in 2019, and had an incredible experience,” she said. “For me, it definitely has been life-changing, and I’m on a mission to help other cancer patients get access to this medicine.”