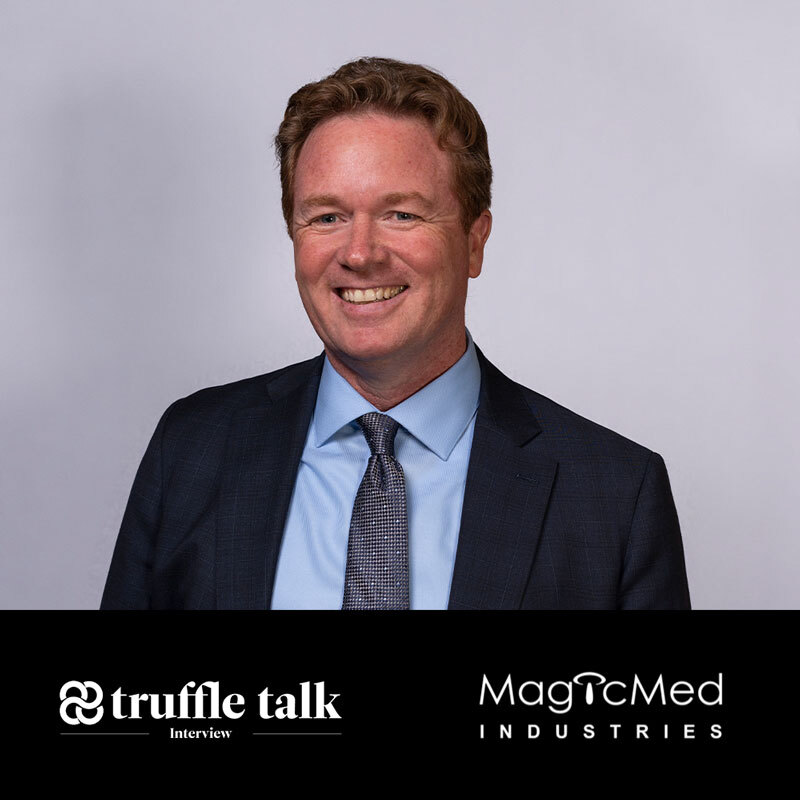 CEO and president of biotechnology company MagicMed Industries Dr. Joseph Tucker says he has made a point of not trying psychedelics himself because he does not want to become biased about their effectiveness as pharmaceuticals. “I’ve been a drug developer my whole career and I have made asthma drugs, cardiovascular drugs, stroke drugs, multiple sclerosis drugs, schizophrenia drugs — only in psychedelics have people asked me if I’ve ever experimented with the drugs I am working on. It’s something unique about this particular sector,” Dr. Tucker tells Truffle Report.

“But obviously, having found myself in this role and seeing the benefits [of psychedelics], I’ve thought, ‘should I?’ At the end of the day, from my point of view, these are pharmaceuticals that have to go through the Food and Drugs Administration (FDA) and Health Canada. I’m not going to try it because I don’t want to have a bias that blinds me as to whether or not these things really work.”

With a background as a biochemist and molecular biologist, Dr. Tucker has been working in the drug development field for the past 20 years. “I’ve been starting new drug development companies in a lot of different spaces,” he says. “For the last eight years, I’ve been working with two scientists out of the University of Calgary who are synthetic biology specialists in scheduled drugs, and who have worked with opioids, cannabinoids, and amphetamines.”

“We’ve been working on this idea of taking molecules that are organically and naturally made, using the tools that nature has, enzymes, and combining that with the tools that scientists generally use, chemistry. Can you combine these things to make new and improved molecules?”

Dr. Tucker explains that his team first started working with this idea with opioids. “Then we did an amphetamine program followed by our cannabinoid program with Willow Biosciences, which we took public two years ago,” he says. “Now we are working with psychedelics, so this has been a natural progression of using synthetic biology and chemistry to make naturally sourced drug molecules into even better molecules, or finding better ways of making these molecules, all with the idea of having better pharmaceuticals.”

MagicMed Developing a Library of Psychedelic and Near-Psychedelic Molecules

MagicMed’s research is focused on the development of a library of patent protectable psychedelic derivatives, called the Psybrary, by combining synthetic biology and traditional chemistry techniques. Dr. Tucker tells Truffle Report that the Psybrary is working towards answering the core question in the psychedelics industry of ‘how does this work?’ “Another way of saying that is, do we need the hallucination for this to work,” he explains. “The reason we don’t know is because we haven’t had a lot of molecules to test and we haven’t generated a lot of data. The Psybrary is using our synthetic biology to modify scheduled drugs that come originally from natural sources, and we are making a huge number of new molecules. We are testing them against all the 5-HT [serotonin] receptors so we will be able to say what structural change will make a particular molecule, psychedelic or near-psychedelic, bind to a particular receptor. We want to figure out which receptor matters if you’re trying to treat a patient.”

Dr. Tucker adds his view that organic psychedelic molecules are not superior to synthetic ones. “The underlying premise of that argument is the idea that because nature makes something it’s better,” he explains. “If you look at drugs, a large percentage of the drugs we use now, which have been approved pharmaceutically for the last 100 years, came from molecules that were in plants. When a person is coming over to eat a plant, it can’t run away, so it has to evolve something to try to stop people from eating it — that’s a poison. Nature wasn’t designing these things to make us better.”

He adds when a person says naturally sourced psychedelics are better, what they are actually saying is a mixture is better based on the concept of the entourage effect. “These are going to be pharmaceuticals, and regulatory agencies hate mixtures — they want a single molecule where you’ve been able to test it and show that it is safe and works,” Dr. Tucker says. “Does it make sense that a naturally derived drug is better than something which is synthesized and pure, but is the same molecule?”

MagicMed’s Use of Artificial Intelligence

In March, MagicMed announced it was partnering with artificial intelligence (AI) thought leaders to design a tool that can provide pharmaceutical design, manufacturing, and pharmacology predictive and validating methodologies to accelerate developments in psychedelic medicine, to be known as PsyAI. The company has also been using AI to organize the vast amount of data the Psybrary is generating.

“We’ve already made hundreds of new unique molecules, but we are going to be making thousands and we are going to test them against the different receptors,” Dr. Tucker tells Truffle Report. “We’re going to generate a huge amount of data that never existed before, and we realized it’s going to be too hard to figure it out by looking on a spreadsheet — the spreadsheet would be 10 miles long. We needed AI to pour through that data, perform pattern recognition, and come back to us with suggestions for the next batch of new molecules we should attempt in order to get the outcome we want.”

Dr. Tucker says the use of AI will help MagicMed arrive at which drug was best to proceed to clinical trials quicker. “It speeds up the early part of the process of arriving at the ideal drug,” he says. “There are other companies looking at AI for other things such as trying to inform patient selection, but we aren’t doing that. For us, it is purely about being able to intelligently design good molecules and being able to accelerate those good molecules into clinical trials.”

MagicMed operates in partnership with other businesses in the psychedelic sector.  “We have these partners who are engaging us to create a unique drug just for them that they can take through clinical trials,” Dr. Tucker tells Truffle Report. “We want to enable the industry and we would like to see 20 companies out there, each with a drug that we made just for them, pushing those drugs through clinical trials. Rather than two or three 50-year old molecules that may or may not work, you have 20 or 30 going through clinical trials that probably have a higher chance of success.”

Unlike other biotechnology companies, MagicMed does not have to raise hundreds of millions of dollars of capital upfront but instead it generates revenue through its partnerships. “They pay us right at the beginning and then when they take the molecule through clinical trials, and ultimately when it gets approved, we get milestones and royalties. With multiple partners, we are not betting everything on one. It’s a very unique revenue model,” Dr. Tucker says.

Going Public in the Near Future

Dr. Tucker tells Truffle Report that MagicMed is on the verge of going public. “It won’t be long until we’re publicly traded so people should keep their eyes on us for that,” he says.

Speaking about MagicMed’s goals for the coming years, Dr. Tucker says he would like to see the company and its partners get five or more new drug candidates into clinical trials and have those pharmaceuticals headed toward patient use. “That would be fantastic. I would like, through the work we’re doing, to contribute to the understanding of what’s going on here,” he says.

He adds that the trend towards decriminalization in the United States will benefit psychedelics in reducing stigmas around the drugs. “That’s important for the ultimate adoption for people if they have been prescribed a drug that was originally a hallucinogenic,” Dr. Tucker says. “There’s a difference between decriminalization and legalization. I don’t think it’s going to be like cannabis where it’ll be completely legal. Decriminalization’s biggest impact is going to be reducing stigma, but that’s about it.”