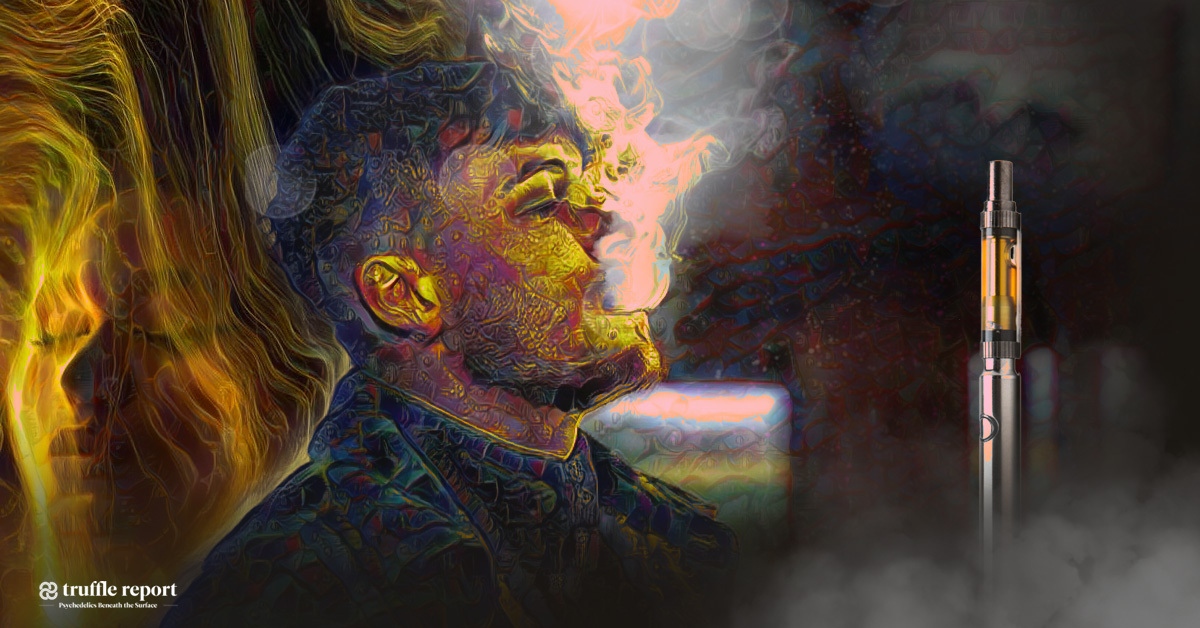 Drinking ayahuasca brewed from banisteriopsis caapi or smoking powder from a glass pipe isn’t the only way to have a psychedelic experience with the psychedelic drug DMT, also called the “spirit molecule”. It can also be mixed into E-liquid, casually referred to as “vape juice” with propylene glycol and vitamin E acetate, and inhaled using common vaporizers or E-cigarettes as DMT pens.

A person might consume doses of DMT because, like ayahuasca, they feel the experience is helpful to their mental health (or physical health), while others could be looking to use mystical experience brought on by this chemical substance for a perceived spiritual benefit. These devices don’t require any modifications to be used with DMT, and pre-loaded DMT vape pens can also be found online for a few hundred dollars or less.

What Are DMT Vape Cartridges & How Do They Work?

Given vaporizers’ connection to a number of health conditions, is vaping a safer DMT experience? Are DMT vape pens any better than other vape pens?

A vape pen is a vaporizing device designed to vaporize distillates and oils. They are mostly used to vaporize nicotine and cannabis, and are called pens because their compact design resembles that of a traditional ballpoint pen and consists of two pieces: a battery and a cartridge. The vaping substance, commonly known as E-liquid, is often flavoured, and comes in prefilled or refillable cartridges.

A DMT pen is simply a vape pen or E-cigarette that uses DMT as the psychedelic active ingredient in its vitamin E acetate. As with cannabis or tobacco E-liquid, DMT vape pens have the benefits of ease of use, convenience, and control over dosage for a peak experience. The psychoactive effects of vaping DMT are mostly identical to those experienced when smoking it. DMT vapes are generally available with a plastic or glass cartridge.

Buying DMT E-liquid isn’t always an easy task. Some distributors make their own vape juice and sell it only to a clientele that they know and trust. DMT is a controlled substance and remains illegal in many places. However, it is possible to find DMT vape pens and cartridges online, especially if one ventures into the dark web, or even social media. Once the cartridge is in hand, vaping DMT is much like vaping any other substance, but with a few simple differences to distinguish the experience.

For example, many users have reported that shaking the pen prior to vaping helps enhance the effects. This is because in an unshaken cartridge, DMT seems to separate from the mixing agent used to create the E-liquid, and shaking it helps recombine the two. It is also necessary to have a battery that burns on a high charge, as DMT needs to be very hot to vapourize properly. The most important thing to have in mind before vaping DMT — or consuming any psychedelic substance, for that matter — is that set and setting are key. Vaping DMT should be done, if at all, in a comfortable and safe environment, ideally with a trip-sitter present, to achieve a peak experience.

Why Do People Choose Pens To Vape & Trip On DMT?

The main reasons why people choose to vapourize DMT are for convenience and the fact that a vape cartridge can be very discreet. The preferred method of smoking powder is generally a glass pipe rather than a disposable vape pen. Despite that fact that it still involves a full body experience from consuming this potent drug, vaping DMT-infused e-liquid is often viewed as a form of harm reduction.

While vaping a substance does not equate with sobriety or abstinence by any means, being able to control the dosage and effects to any extent does help psychedelic drug users better regulate their habits.

Users consume DMT for many reasons, from perceived therapeutic benefits of treating mental health disorders to spiritual insight, often called “breaking through.” Those who have had positive experiences breaking through often report white light, and the presence of entities commonly referred to as “machine elves.”

The DMT molecule acts on serotonin receptors, and provides a powerful hallucinogenic experience with intense psychoactive effects. It is understandable that these might have impacted the religious practices of ancient peoples.

There is no currently research concerning the safety and potential for abuse of DMT vape pens specifically. However, there is enough data on vaping to know that vaping regularly can have the same health consequences that smoking cigarettes/cannabis does. Another aspect to keep in mind is the fact that there is zero regulation around DMT E-liquid, so determining whether you’re buying a pure substance or something that is laced with harsh chemicals is nearly impossible unless you produce the liquid yourself.

Driving this push toward new psychoactive substances is the growing interest in ayahuasca. Retreats offering DMT in the form of ayahuasca brew doses through traditional ceremonies, authentic or otherwise, are springing up rapidly through South America. Some of these offer an Amazonian plant brew, while others offer toad venom or extract containing the molecule 5-MeO-DMT. Experts urge caution in selecting these retreats, as not all of the practioners are properly trained. Many are opportunistically catering to demand for the psychedelic substance by tourists, and there have been reports of accidents and abuse perpetrated against vulnerable visitors.

Finally, please remember that DMT still prohibited and very illegal in most countries. A person caught with a DMT pen or E-liquid, as with other illegal drugs, can face serious consequences. Stay safe.