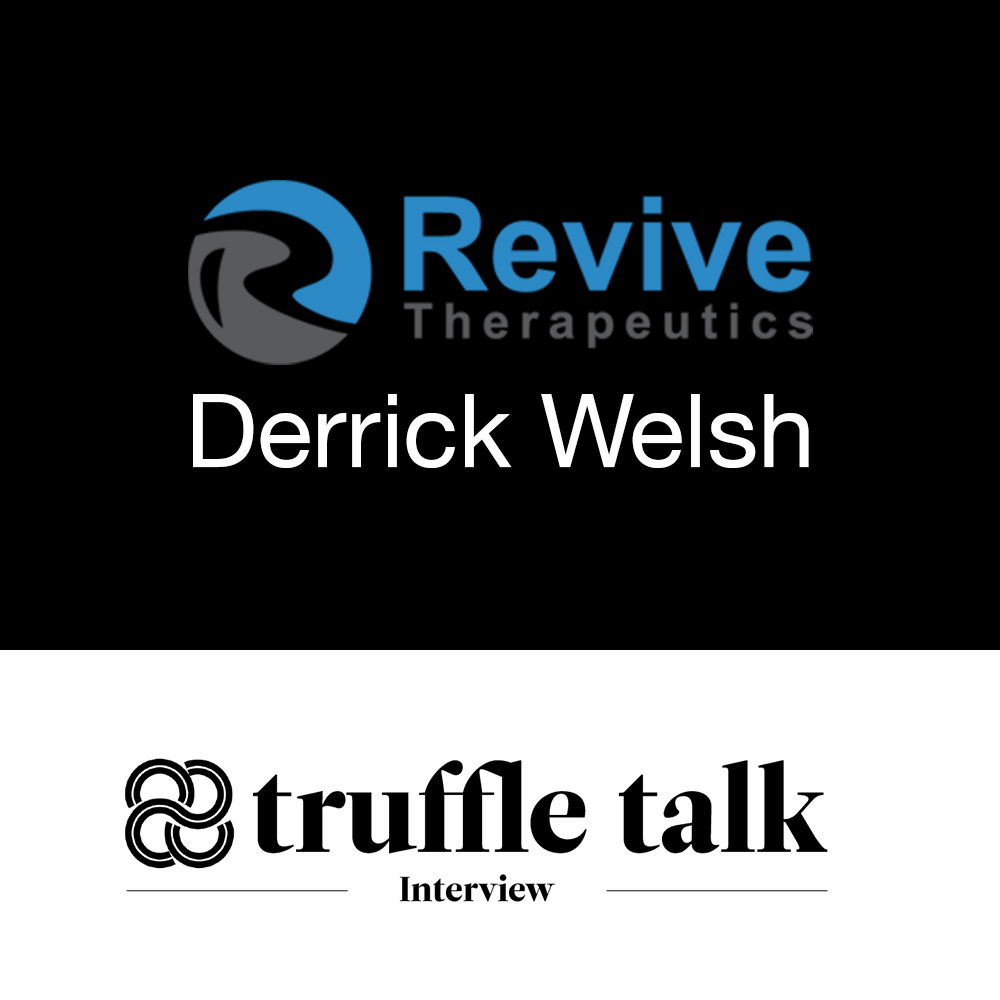 It is an exciting time to be part of a psychedelic-based business according to Derrick Welsh of Canadian life sciences company Revive Therapeutics “It’s a really unique opportunity to be at the forefront of that science,” Welsh tells Truffle Report.

Having previously worked as a product designer for cannabis company Xanthic Biopharma, Welsh entered the psychedelics field when he founded Psilocin Pharma Corp which was acquired by Revive in March last year. “Psilocin Pharma Corp was an intellectual property-based platform for psilocybin and we were coming up with formulations related to healthcare,” he says. “I felt psilocybin was such a unique compound and we did a lot of work on creating products that would be suited for treating post-traumatic stress disorder, chronic pain syndromes, and other health issues plaguing our population today. Revive thought it was a really unique offering to the market.”

Revive is one of 17 North American life sciences companies included in the world’s first psychedelic stock exchange traded fund (ETF) was launched by Horizons ETFs Management on January 27. Welsh says the ETF helped elevate Revive and the other businesses included in the portfolio, traded collectively under the ticker PSYK. “It really shows Revive is a top competitor in the market,” he says.

In late 2020, Revive announced it intended to purchase the rights to PharmaTher’s psilocybin program. Welsh was unable to provide an update on the deal at this time, however, he says that it is a great opportunity for Revive. “PharmaTher has provided the market with some really unique opportunities in the last couple of months,” he tells Truffle Report.

Welsh says Revive, through a partnership with the University of Wisconsin-Madison, has been developing a new psilocybin delivery mechanism in the form of an oral film product like a breath strip, and soon will undertake a methamphetamine-use study. “It will look at the use of psilocybin to combat the methamphetamine-use disorder. It’s looking at addressing one of the key problems in society at the moment. We are hoping that is going to take place in late Q1 or early Q2 of 2021,” he says.

Goal to Produce Own Psilocybin

Revive in January also announced it had entered into a partnership with North Carolina State University to develop synthetic psilocybin through a biosynthesis platform. Welsh says the goal of this research is to allow Revive to become part of the psilocybin supply chain. “This is about self-sufficiency,” he tells Truffle Report. “Quality control and consistency (of psilocybin) are paramount especially when you are looking at developing pharmaceuticals like Revive is involved with right now. There is a real shortage of psilocybin for research and we’re one of the lucky companies that are already working with psilocybin through our partnership with the University of Wisconsin-Madison. Through this relationship with North Carolina State University, we may have the opportunity to produce our own psilocybin in the future.”

The research is based on a natural biosynthetic enzymatic platform developed by North Carolina State researcher and professor Dr. Gavin Williams. In a statement, Revive said: “Dr. Williams and his team recently developed an artificial enzymatic platform called the ‘alcohol dependent hemiterpene’ (ADH) pathway for construction of alkyl pyrophosphates. Here, the products of the ADH pathway will be used to generate key building blocks for psilocybin and its derivatives. The goal is to engineer E. coli to be a factory for psilocybin production, using a completely artificial biosynthetic logic.”

Welsh predicts that the team will have some success with this research. “The cool part about it is that it uses E. coli bacteria which is already used to produce a number of different pharmaceuticals such as chemotherapy drugs and penicillin, and similar methods are used to produce Vitamin C,” he says. “We can’t say it’s successful today but we anticipate some success based on the previous track record of this process.”

If you enjoyed this article, check out Truffle Report‘s interview with Steve Hawkins, CEO of Horizons ETFs Management on launching the first psychedelic stock ETF here.