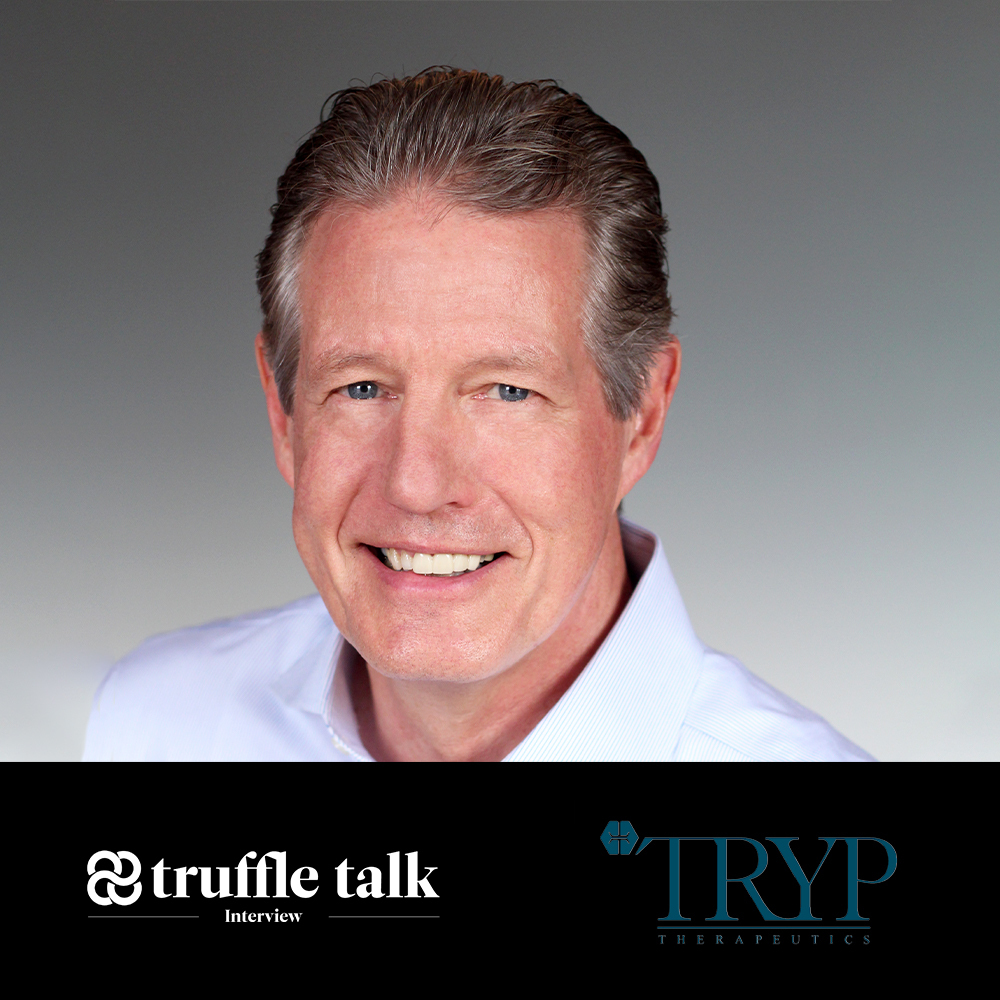 For the past 35 years, Tryp Therapeutics’ president and chief science officer Dr. James Gilligan has worked in the life sciences industry in various roles ranging from drug development to business development. Having obtained a Ph.D. in pharmacology, with expertise in cardiovascular pharmacology, Dr. Gilligan co-founded biotechnology company Unigene Labs in the early 1980s where he worked for 28 years before pursuing a Masters in International Business. He then founded and was the chief scientific officer at Tarsa Therapeutics before becoming a consultant.

When he was first approached by Tryp Therapeutics in 2020, Dr. Gilligan says he saw great potential in both Tryp Therapeutics’ psilocybin and oncology programs. “I’m fortunate enough now in this stage of my career to be able to associate with companies where I think there’s a high likelihood of success,” Dr. Gilligan tells Truffle Report. “You want to be involved with the group who has clinical studies that will help patients — if you can’t get the drug over the finish line, you don’t really help the company or investors, and you certainly don’t help the patient. I looked at the opportunity and felt that Tryp had two really sound assets that have a lot of potential and I wanted to be a part of that,” he says.

“People go into medicine because they want to help patients and that’s the collection of people we have here. The end goal is to bring something forward which will help people have a better, healthier life.”

Tryp Therapeutics’ Psilocybin for Neuropsychiatric Disorders (PFN) Program is researching the potential use of compounds, specifically psilocybin, to treat diseases with high unmet medical needs. The lead drug candidate for the program is TRP-8802 for the treatment of fibromyalgia, a neurological disorder that causes chronic widespread pain, fatigue, disrupted sleep, depression, and diminished cognition, which affects more than 5 million people in the United States.

Dr. Gilligan tells Truffle Report one of the unique things about the PFN program is that it is trying to correct certain disorders, not just the symptoms of the problem such as pain. “In many instances, the drugs we develop provide symptomatic relief, the clinical manifestation, but not necessarily treat the actual disease,” he explains. “In fibromyalgia, less than 25 percent of people have undergone therapy that is effective for them and over a third resort to the use of opioids, and we know how horrible that can be with the opioid crisis, so we’re looking at providing patients a safe treatment regime and therapy that is going to improve their lives.”

Tryp Therapeutics has also partnered with rare eating disorder expert Dr. Jennifer Miller of the University of Florida to investigate the use of TRP-8802 to treat symptoms associated with rare over-eating disorders. Tryp Therpatupics and Dr. Miller have begun designing a Phase 2A clinical which Dr. Gilligan says is hoped to begin by the end of the year, possibly by the end of Q2.

“We’re dealing with experts in this particular instance who are experts in the disease, not necessarily in psychedelics, so we will be bringing the psychedelic expertise to the table,” Dr. Gilligan says. “It will be the combination of the two that will improve our likelihood of success in these programs.”

Dr. Gilligan tells Truffle Report that over the coming years Tryp Therapeutics hopes to establish the clinical utility of psilocybin to demystify its effects. “What we’re doing in our clinical studies is we are measuring a number of different parameters in order to understand as best as possible how psilocybin is working and how it works in conjunction with psychotherapy,” he says. “We feel that the better the understanding it is of how it works will help not only patients with interest in using the therapies but also for professionals who want to look at this as a treatment paradigm and embrace it and understand its potential.”

“I don’t want to say it has a stigma, but certainly its research has been held up for a while due to recreational use and because it is a Schedule I molecule (in the United States). So we want to have a lot of quality data to help position psilocybin as an ethical pharmaceutical with demonstrated clinical safety and utility, at a standard of all drugs that are approved.”

Clinical research will help in the effort to change psilocybin from being classified as a Schedule I drug, Dr. Gilligan adds. “We are doing everything to minimise it being used outside of a clinical therapeutic environment,” he says. “It will alleviate some of the pushback that you might get, for example, if you were to prescribe psilocybin. That’s not what we are looking at. For all of our programs, the psychedelics will be used in conjunction with psychotherapy with administration by healthcare professionals.”

Dr. Gilligan says the team at Tryp Therapeutics has the expertise required to get drugs through the regulatory process. “You need a lot of cross-functional expertise in order to get a drug approved, in this case by the Food and Drugs Administration (FDA) or Health Canada. We have a management team with 25-plus years experience in the pharmaceutical biotechnology industry,” he says. “We are also investing time, effort, and resources into some novel delivery techniques which we think will have a positive impact on the field. We are in the process of filing a number of patents and as those come forward, we will become a leader in this space due to the investment we’ve made in basic research and improving how psilocybin is used.”

In addition to the PFN program, Tryp Therapeutics is also researching the effects of razoxane on soft tissue sarcoma, a rare form of cancer that begins in the connective tissues in the body, through its oncology program. The company has developed TRP-1001, an oral formulation of razoxane, which Tryp Therapeutics has stated should qualify for Orphan Drug status due to soft tissue sarcoma being a rare disease.

Dr. Gilligan tells Truffle Report that razoxane had been in clinical development previously back in the 1970s, however, new information about the effects of the molecule has been discovered and advances have been made in the understanding of tumor growth and metastasis. “It’s a combination of those two distinct areas of knowledge that has revealed the potential of razoxane and soft tissue sarcoma,” he says.

“Soft tissue sarcoma is an area where there has not been a lot of advances over the last few decades. It’s unfortunate that a majority of the patients that have soft tissue sarcoma happen to be children or adolescents and the prognosis is not very good. What we’ve found is that if you give razoxane in combination with radiation therapy it improves the outcomes significantly. Furthermore, if you use the drug in combination with radiation and another chemotherapeutic agent, it enhances the response even further. It has shown a dramatic reduction in metastasis, which is a leading cause of death in oncology where the tumor cells escape, go somewhere else in the body, and grow.”

Dr. Gilligan says early studies on razoxane’s use showed a response rate up to 89 percent, which he describes as phenomenal for the oncology field. “In oncology right now, there’s an increasing use of combination therapy because a singular agent is either not effective or the tumors mutate,” he says. “We see this [drug] as a tremendous tool in the armory of oncologists to add to therapy, especially in the area of soft tissue sarcoma.”

If you enjoyed this article, check out Truffle Report‘s interview with Joshua Bartch, CEO of Mydecine Innovations Group here.