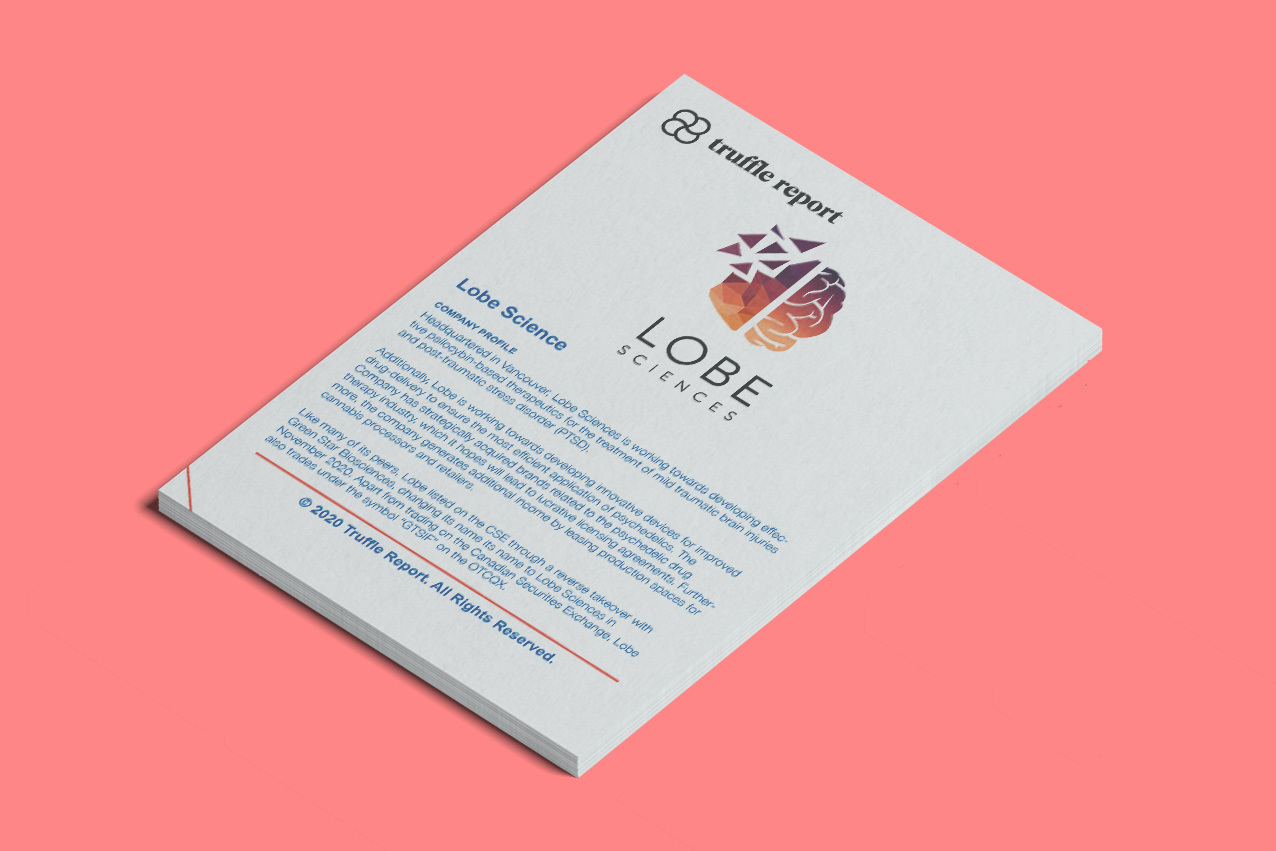 Additionally, Lobe is working towards developing innovative devices for improved drug-delivery to ensure the most efficient application of psychedelic compounds. It has strategically acquired brands working on psychedelic drug therapies, which it hopes will lead to lucrative licensing agreements. The company generates additional income by leasing production spaces for cannabis processors and retailers.

Like many of its peers in the sector, Lobe listed on the CSE through a reverse takeover of Green Star Biosciences. The company changed its name to Lobe Sciences in November 2020 and has its headquarters in Vancouver. Apart from trading on the Canadian Securities Exchange, Lobe also trades under the symbol “GTSIF” on the OTCQX.

Lobe’s approach to the psychedelic industry differs from its competitors. It does not carry out any R&D work of its own. Instead, it acquires existing brands & intellectual property rights in hopes of accelerating their research efforts. We’ve broken down their holdings to get a better picture of their sector exposure.

Eleusian is looking to prove that physiological effectiveness of treatments in post-concussion syndrome and PTSD are enhanced by measured doses of psilocybin. It has partnered with the University of Miami to conduct this clinical study.

The Market for PTSD

Equally exciting is Eleusian’s work on developing a concept prototype of its nasal mist device. In this regard, in December 2020, it engaged VisionWorks Engineering to commence engineering work on the device. This is a major milestone towards the ultimate goal of the development of effective delivery methods and commercialization. The device includes a nasal delivery system for the administration of pharmaceutical agents at preselected dosages and times, and allows for the precise control and delivery of medicines through the nasal cavity. Consequently, this leads to faster and more efficient uptake of psychedelics and other medicines that target the brain.

Recently, the company announced the completion and testing of the proof-of-concept prototype of the nasal mist device. As such, this breakthrough positions Lobe as a leader in the delivery of effective therapeutics to treat patients suffering from mild traumatic brain injury, post-traumatic stress disorder, and other mental health conditions.

Lobe owns the property leases and brands of Cowlitz County Cannabis Cultivation which is a licensed cannabis producer and processor.

The company is licensed to process, dry, cure, package, and label useable marijuana, marijuana concentrates, and marijuana-infused products for sale to retailers in the State of Washington.

In November 2020, Cowlitz received and signed a non-binding letter of intent with IONIC Brands for the proposed sale of certain assets including the assignment of all property leases relating exclusively to Cowlitz’s business. The sale price of the assets would be a minimum of $30mn. Following the closing of the transaction, Lobe would retain ~49 percent of Ionic’s common shares.

In February 2019, Lobe established a joint venture with Progressive Herbs, an Illinois-based agricultural technology company. Progressive and its affiliate, Aggressively Organic, own a proprietary technology for a sustainable and inexpensive growing system known as Micro Dendritic Pods.

As a result, Progressive has executed an exclusive sublicense agreement with Capri for the use, reproduction, development, manufacture, commercialization, sublicense, and exploitation of the Progressive IP solely in connection with the development of the above-mentioned products.

Within the psychedelics space, Lobe Sciences differentiates itself from its competitors given the fact it owns 5 provisional patents filed for medicines which it believes will achieve efficacy in treating certain conditions. Furthermore, the company is in the process of establishing a scientific advisory board which will primarily focus on the psychedelics space.

The benefits of psychedelic drugs are currently being evaluated across a wide range of mental health disorders, including depression, obsessive-compulsive disorder (OCD), and anxiety as well as areas specifically being targeted by Lobe Sciences such as brain trauma and PTSD.

Through its subsidiary Eleusian Biosciences, Lobe Sciences has exposure to the development of therapeutics for multiple pathological psychological diseases based on MDMA and psilocybin, which is the active ingredient of psychedelic mushrooms as well as NAcetylcysteine (NAC) compounds.

NAC is a dietary supplement derived from the amino acid L-cysteine which has applications as an antioxidant for reduction of DNA damage, as an antidote for acetaminophen overdose, and for its liver-protective properties to support the healthy functioning of the immune system.

Furthermore, the company is able to generate continuous streams of revenue through its various licensing agreements. Lobe has the right opportunity with its proprietary delivery device as well as the right science behind psychedelics and the applications it is pursuing, making it a good bet on the psychedelics sector going forward.