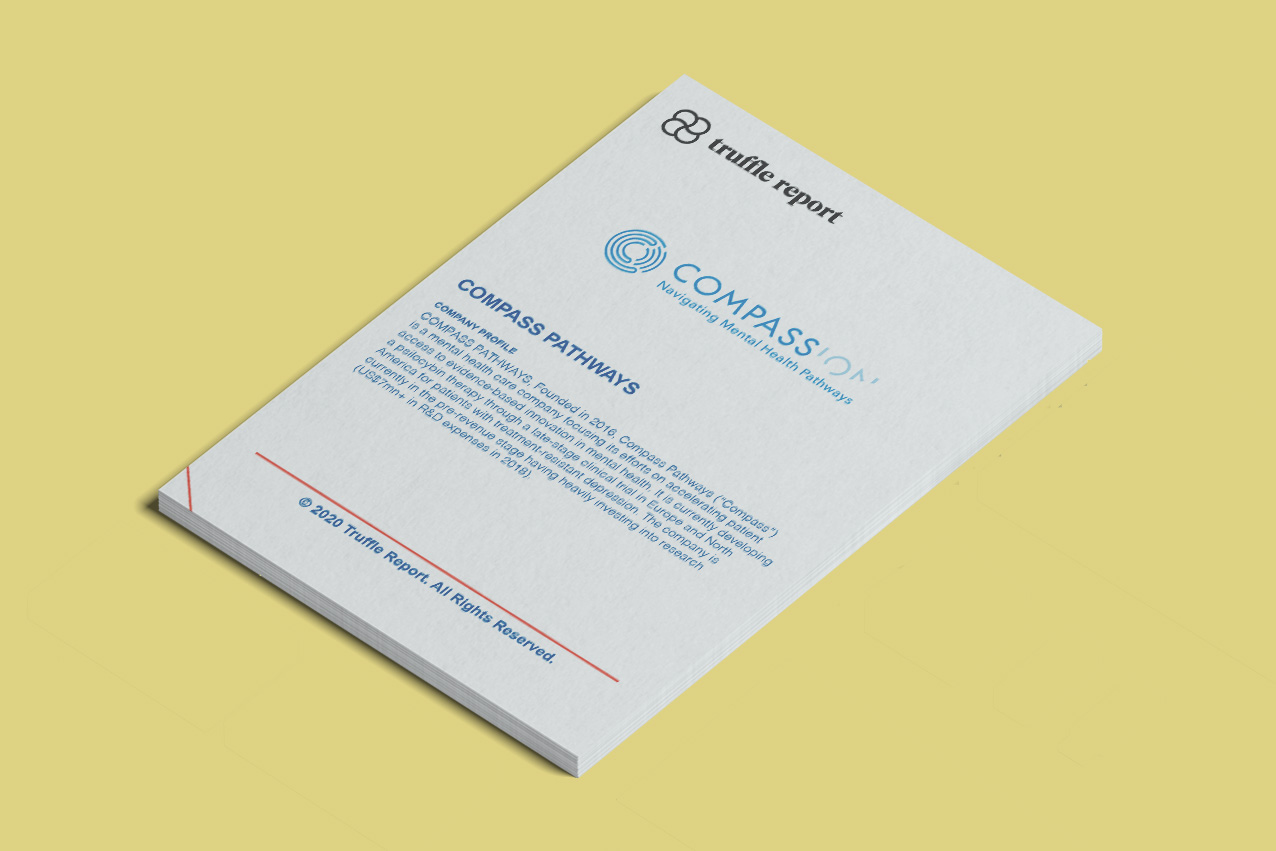 Compass Pathways, a company we’ve profiled in the past, and which is currently developing a therapy that uses synthetic psilocybin, began it’s first day of trading on the Nasdaq this Friday. In doing so, it became the first pure-play psychedelic drug company to publicly list on a major US exchange. The IPO exceeded expectations, with prices climbing to $29 per share by the end of trading this afternoon. The offering of 7.5 million shares raised a total of $127 million, and gave the Company an overall initial valuation of $587 million.

Compass has developed “COMP360”, a crystalline form of psilocybin — the mind-altering compound in magic mushrooms. Based in London, and backed by billionaire investor Peter Thiel, Compass intends to pair the administering of COMP360 with therapy for Treatment Resistant Depression. If COMP360 is approved, the Company plans to market it toward health-care providers and clinical networks in the U.S. and Europe.

Though the SEC filing doesn’t provide an exact breakdown for the use of the proceeds, we do know that the funds will be used for:

(1) Funding clinical trials, therapist training, and other activities to support the development of the COMP360 psilocybin therapy through completion of all ongoing trials through the end of Phase II meetings with the FDA

(3) Funding general business development activities, including strategic investments which may aid in developing digital technologies to complement and augment existing therapies offered, as well as potentially providing access to other novel drug candidates for development in neuropsychiatric and related indications.

Compass is currently conducting a randomized controlled Phase IIb clinical trial in 216 patients suffering from Treatment-Resistant Depression (TRD) in 20 sites across North America and Europe. This dose-finding trial is investigating the safety and efficacy of COMP360 combined with psychological support, for the treatment of TRD, and aims to determine the optimal dose of COMP360, with three doses (1mg, 10mg, 25mg) being explored.

This trial has been designed to capture a statistically significant reduction in MADRS. Compass Pathways will report data from this trial in late 2021. Compass is also collecting digital phenotyping information through the measurement of human-smartphone interactions. After the trial, these data sets will be compared with information collected from validated psychiatric scales, such as MADRS, to develop potential digital applications to help anticipate relapses of depressive disorders.

In 2018, the FDA gave breakthrough status to COMP360. The FDA has also given the green light to other treatments using psychedelic drugs. In 2019, it approved Johnson & Johnson’s nasal spray Spravato, which uses a derivative of ketamine, for treatment-resistant depression.

As per its filings, Compass states that these losses stem primarily from the development of its investigational COMP360 psilocybin therapy for TRD, and it expects these costs to continue to increase as it eventually expands into additional indications.

Compass states that it relies on contract drug manufacturing organizations, or CDMOs, to synthesize the active pharmaceutical ingredient (“API”), that comprises COMP360. It has no plans to build any manufacturing facilities.

Since psilocybin consumption isn’t yet legal, regulatory scrutiny could be more intense. Because COMP360 psilocybin therapy contains psilocybin, Compass Pathways needs to obtain and maintain a DEA researcher registration that will allow those sites to handle and dispense COMP360 and to obtain the product from its importer. If the DEA delays or denies the grant of a researcher registration to one or more research sites, the clinical trial could be significantly delayed.

Globally, more than 320 million people suffer from Major Depressive Disorder (MDD). The economic burden of MDD in the United States, accounting for comorbid physical and psychiatric conditions, is estimated to be over $200bn per year. Treatment-Resistant Depression (TRD), a condition affecting the approximately 100mn patients worldwide who are not helped after two or more existing depression treatments, has even greater economic and societal cost than non-TRD MDD.

The IPO has seen heavier than expected demand, most likely related to a growing investor confidence in Compass’ ability to execute its strategy, not only in advancing COMP360 for the treatment of TRD, but also expand its therapy into new indications and explore other compounds and therapies to address areas of unmet need.

If they are able to pull this off, they will maximize the reach and value of their psilocybin therapy by creating a new model for mental health care.