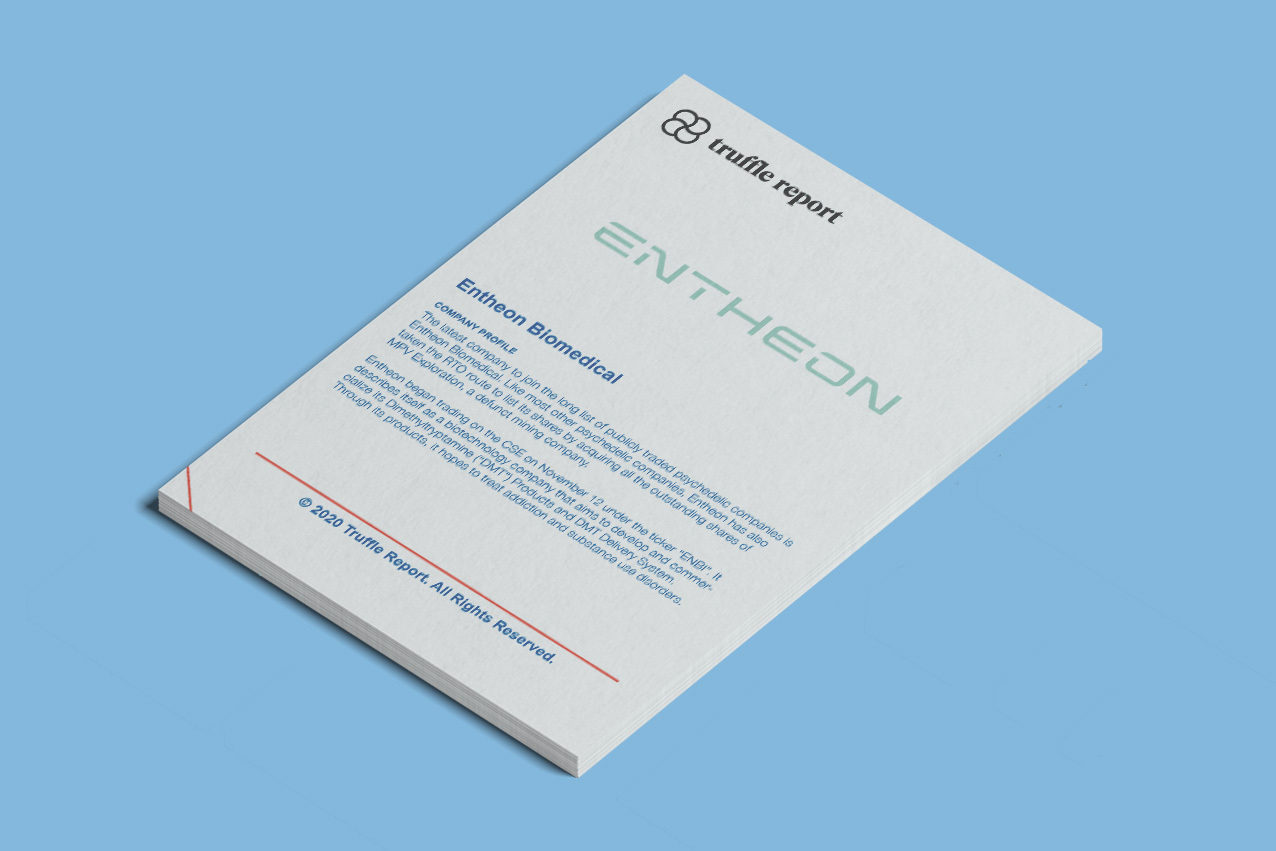 Joining the growing list of publicly traded psychedelic companies is Entheon Biomedical. Like many Canadian psychedelics companies, Entheon has taken the RTO route to list by acquiring all the outstanding shares of MPV Exploration, a defunct mining company. Entheon began trading on the CSE on November 12 under the ticker “ENBI.” It describes itself as a biotechnology company that aims to develop and commercialize its dimethyltryptamine (“DMT”) products and DMT delivery system. Through its products, it hopes to treat addiction and substance use disorders.

Entheon is focusing its efforts to develop and commercialize a portfolio of safe and effective DMT based psychedelic therapeutic products. Its portfolio consists of proprietary DMT drug formulations packaged in single-use containers. These formulations will help to treat a number of different addiction and substance use disorders. Eventually, Entheon hopes that medical clinics, treatment centres, and hospitals will use its products.

DMT is a chemical substance that naturally occurs (in small amounts) in many plants and animals. It is a structural analog of serotonin and is among the most potent of the classic psychedelic drugs. It is unique in that its effects last only minutes instead of hours. Given the short-acting and powerful nature of DMT, it is an ideal molecular candidate for medical use.

The ability of each DMT product to effectively treat the particular addiction or disorder is dependent on both: (i) the amount of DMT present in each product, and (ii) the particular dosage instructions provided therewith. Entheon plans to develop and sell containers of DMT-based medicine containing predetermined amounts of DMT with the corresponding instructions to treat a patient for his/her specific addiction.

Entheon also plans to develop and commercialize its DMT delivery system to administer its products and ensure their accurate performance. The DMT delivery system will slowly pump the DMT products into patients. Thereafter, it will measure their vital signs to ensure the particular DMT product is working correctly. This equipment will use a proprietary interface to connect the container of DMT-based solution to a special intravenous pump. Moreover, this pump will be optimized to deliver the DMT products according to the patient’s particular dosing strategy.

Furthermore, the system will include sensors to monitor the patients’ brain activity, heart rate, temperature, and other vital signs. This will help ensure that they are responding as expected to the treatment.

It aims to integrate its intravenous infusion technology with real-time monitoring devices, including electroencephalography. Unlike other psychedelic experiences, if the patient has an adverse reaction, the DMT delivery system will allow the experience to be stopped safely and quickly without the need for sedatives or other drug interventions. The DMT delivery system will also allow for the attending physician to make manual inputs and adjustments.

In 2018 there were an estimated 14.4 million adults in the United States suffering alcohol use disorder. Globally, it is estimated that 5.9 percent of all deaths were attributed to alcohol consumption. In 2017, an estimated 20.7 million people aged 12 or older needed substance use treatment. However, in the same year, only ~4 million of those people had received any substance use treatment. This statistic highlights a major deficit between need and access. According to The National Institute on Drug Abuse, approximately 2.1 million Americans have a prescription opioid-use disorder. Moreover, the Center for Disease Control & Prevention reports that more than 16 million people in the United States are living with a disease that has been linked to smoking.

This combination of an under-serviced population of substance use disorder sufferers for whom there are limited treatment options, paired with low efficacy of existing treatment options may lead to increased demand and utilization of cost-effective, high efficacy psychedelic-assisted therapies. To sum up, based on the above statistics, psychedelic-assisted therapies may emerge as an important tool for treating substance use disorders where other treatment types have failed.