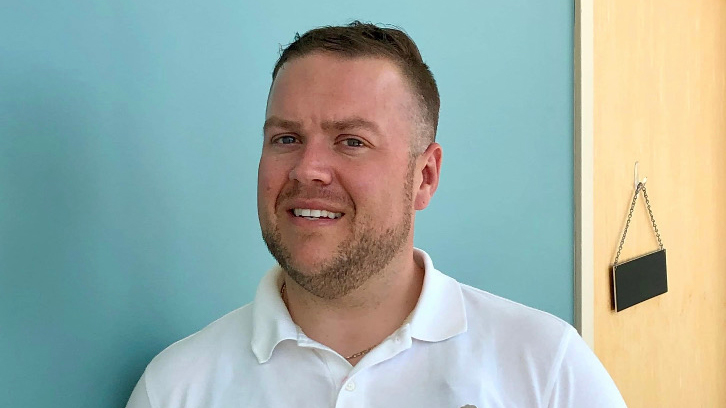 We Spoke With CJ About his Holistic Approach to Patient Care

CJ Spotswood is a registered nurse and full-time student based in Maine, just close enough to Canada to be a Tragically Hip fan. After working in the ER for nearly two decades, he began researching how psychedelics can form an integral part of holistic healing. He’s become known as the Entheonurse, and spoke to Truffle Report about his journey.

Late one evening, in the four-bed Emergency Room where CJ Spotswood works, a man in the grip of psychosis was admitted.

“I felt really bad for the guy,” CJ tells me while out walking his dog one crisp autumn evening, “He said, ‘I was medicating with psychedelic mushrooms, trying to improve my mood.’”

CJ is no stranger to psychotic episodes. He’s wrestled weapons from aggressive patients, and sat with others while they calmed down or worked through a bad trip, but this particular patient, and his difficulties self-medicating with psilocybin in an attempt to improve his mental health, intrigued CJ.

“This was, at the time, something I really didn’t know too much about, and this was a couple of months before Michael Pollan’s book came out, so I started doing some research on my own and reading all this literature.” What he found, he says, was “mind blowing.”

CJ’s background is in more holistic methods of medicine than the cookie-cutter medical approach. As a student in human psychology, he tackled each lesson with a grander outlook on patient care — seeing the human as whole, and not just a sum of their parts.

“Everything is really mind, body, spirit,” or, “neurological, biological, psychological,” he tells me, “so, if you have a patient who comes in with cardiac issues, how are you going to treat that instead of just, ‘here’s some blood pressure medications,’ what other things can we do?” CJ cites stress management as a method that helps lower blood pressure, resulting in better outcomes for his patients than medication alone. This, he says, has always been his approach when sitting with a patient, learning about not only their symptoms, but their perspectives and their livelihood.

“You can definitely tell the difference when your provider is a nurse practitioner — and I don’t want to sound biased by any means, but there is just a different way that we do things. We talk and we really want to know everything going on and how we can do it.”

So, when faced with patients who are self-medicating with psychedelics, an empathetic CJ doesn’t turn away.

Instead, he goes to his hospital and tells them that they need more research into psychedelic treatment options. Knowing that marijuana is already used medically and is being legalized recreationally by individual states, and in countries such as Canada, he guesses that nearly seventy percent of the patients he interacts with already have the drug in their system. He seeks out Cannabis Nursing Certifications, but is rejected by his hospital due to a lack of federal funding. Although marijuana is legal in Maine at this time, it still isn’t legal federally, and the money just isn’t there.

But this doesn’t dissuade CJ. Instead, he begins leading presentations and discussions at the American Psychiatric Nurse Association’s National conference, talking with Cam Integration, and various other conferences and conventions. Working with groups such as Psychedelics Today and psychedelics.report, he is featured on podcasts and talks with authors, constantly asking, “where are we?” in the use of psychedelics as medicine. He has led conferences that are standing-room-only, with more than 400 attendees, all eager to ask questions and open up about their own experiences with marijuana and psilocybin.

From the Entheonurse: Authentic Presence with Intention

An entheogen is any plant-based chemical substance that is used to create meta-conscious states of being in pursuit of spiritual healing and growth, the main example being psilocybin mushrooms. The intention is to “heal from within,” CJ tells me. And he says that nurses are perfectly suited for the job.

“Part of what I do working ER, is I am with people who are mentally either psychotic for whatever reason, or under the influence, and that’s a normal place for me to be: holding space and having those conversations.” So, why not do this with intention, guiding patients through their journeys and providing a safe space for their patients?

“For nursing, that’s natural for us, and if you look back, and you read the literature from the beginning, from the ‘50s and ‘60s when this was coming out and they were doing this in the state hospitals, it’s the nurses that were sitting with people. They were there, they were spending the time and it was in the protocol, ‘you will spend time, you will be there on your journey with the nurse.’ And I think we need to, as nurses, be aware of that and advocate for ourselves and just say, ‘hey, this is what we do. We are the most trusted profession. We are here. We want to do this.’”

And that is exactly what an Entheonurse does.

We ask CJ: is Psychedelic Medicine for Everyone?

We use various antidepressants to help resolve mental health issues, as they activate the serotonin systems in our brains, which entheogens do when consumed. There is also ample evidence of positive outcomes in patients with eating disorders when using marijuana. But CJ doesn’t want to see psychedelics restricted to mental health issues.

No, psychedelics are not for everyone. Those with pre-existing psychotic disorders, schizophrenia, or a close relative with a history of psychosis should steer clear. With that in mind, one of CJ’s fears is seeing psychiatry enveloping the use of psychedelics, restricting access to those without a medicinal need. “I don’t want to see where people who don’t have a mental health issue don’t have access,” CJ says, “because I think that by having that cognitive freedom and being able to go inward and learn more about yourself, I think that we’ll see better outcomes from people learning these types of things.”

CJ and I discuss the state of the world in 2020, with political polarization and isolation due to the pandemic. This negativity is something that CJ believes psychedelics will directly address. He believes, “we’ll see a lot of people just kind of realizing how close we actually are to each other and how much empathy we can build and just kind of love one another.” The role of the Entheonurse, as CJ defines it, is to hold that presence and provide a safe space for those who want it. “People want to have someone who will talk and be there with them, knowing that they feel safe, having that safe setting for them, and just kind of hold that authentic presence with them.”

CJ wants this information out there in the medical community, and freely publishes his findings on his own website and social media platforms. He sees the need for more education on psychedelic medication, as well as an authentic presence while patients undergo these radical journeys. With more education and decriminalization of entheogens, CJ hopes to see more Entheonurses joining him in treating patients’ mind, body, and soul.