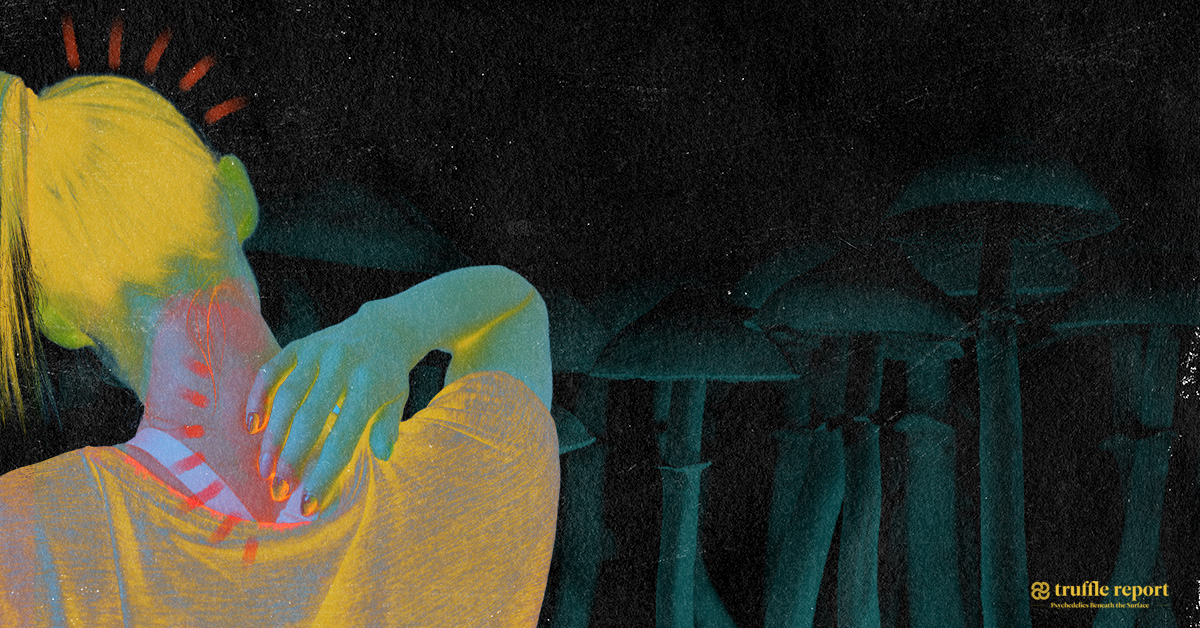 In the past few years, research regarding the use of psychedelics for mental health has increased significantly. Clinical trials involving psychedelic-assisted therapy to treat conditions such as depression or anxiety are no longer scarce. But what about physical pain? Although clinical evidence regarding the use of psychedelic substances in pain management is limited, studies and case reports have shown potential benefits in the treatment of cancer pain, phantom limb pain, and cluster headaches.

Recently, universities and private companies alike have been exploring the use of psychedelics in pain management. Some of the institutions leading the research include the University of Michigan, Yale University, and the University of California San Francisco.

The mechanism of chronic pain is still not fully understood. It is known that repeated pain signals produce peripheral and central sensitization, which is why we are able to experience pain both physically and emotionally. Because pain has cognitive and physical components, psychedelics could have the potential to manage chronic pain.

One of the main reasons why experts are studying the use of psychedelic therapy to treat chronic pain is the opioid epidemic. Unlike opioids, most hallucinogens are not addictive and can have a favourable safety/risk profile when managed properly.

Research has shown that psychedelics can “reset” areas of functional connectivity in the brain that play a key role in several central neuropathies or “pains” within the central nervous system. The exact pain-relieving mechanisms of psychedelics are not yet clear, however, the similarity between the 5-HT2A activation pathway of psychedelics and human pain modulation pathways suggests many possibilities. For one, the agents in psychedelic substances could help reverse the changes in the neural connections that are found in chronic pain patients.

In July 2021, Tryp Therapeutics announced its plans to conduct a Phase 2a clinical trial with the Chronic Pain & Fatigue Research Center in the Department of Anesthesiology at the University of Michigan Medical School. This open-label Phase 2a clinical trial will examine the effectiveness of TRYP-8802, an oral formulation of synthetic psilocybin, in conjunction with psychotherapy to treating fibromyalgia, a disease of the central nervous system characterized by widespread pain often accompanied by fatigue, cognitive problems, and sleep disturbances. The treatment has been designed to target nociplastic pain originating in the central nervous system through the neuroplasticity benefits of psilocybin.

A new study by Yale University scheduled to launch later this year will examine using a form of psilocybin, compared to a placebo, to treat cluster headaches.

The participants will be randomized to receive either oral placebo, or low or high doses of psilocybin in three experimental sessions, each separated by five days. They will maintain a headache prior to, during, and after the sessions in order to document headache frequency and intensity. Six months after the final experimental session, the participants may be invited for a second round in which they will be randomized to receive either low dose or high dose psilocybin.

Neurologist and lead investigator Emmanuelle Schindler is recruiting some subjects for the study from Clusterbusters, an activist group for people who suffer from cluster headaches, and which is looking into psychedelics as a potential treatment.

This isn’t the first study of psychedelics as a treatment for cluster headaches. In 2006, a study published in the journal Neurology interviewed 53 cluster headache sufferers who sought treatment with either psilocybin or LSD. The researchers found that 32 of the participants stated that the psychedelics successfully ended their pain.

The main purpose of this study is to examine the preliminary efficacy of psilocybin therapy for people with chronic low back pain, which is a common musculoskeletal problem and a leading cause of disability. This study analyzes the effects of a single dose of psilocybin in combination with previous psychotherapy and integration sessions.

“We will be focusing on people with chronic back pain who have already tried but did not get better from multiple mainstream treatments including physical therapy and pain medications,” said leading investigator Joshua Woolley in a previous interview with Truffle Report. “We’ve decided to focus on chronic low back pain because it’s the most common cause of chronic pain, and we wanted some homogeneity in our patient population. It turns out that a lot of the modern treatments for chronic pain are about changing your mindset.”

Woolley explained that the team believes that psilocybin therapy could help change the way patients think about their pain similar to how it has helped people cope with a life-threatening cancer diagnosis. This means that it can help people change their relationship with the pain itself. He adds that psilocybin may help normalize the abnormal neural circuitry that’s been set up and reinforced that likely underlies chronic pain.

What is the Future of Psychedelic-Assisted Therapy for Pain Management?

This research is still in very early stages, and we are yet to see substantive results. Some experts advise proceeding with caution because even if psychedelics can relieve physical pain, they may not be better tools than those that are already widely available. Others argue that the evidence suggests that drugs are so powerful that they should only be used in conjunction with psychotherapy.

“If these drugs are going to help, it’s going to be much like the way we think they help for depression—[that is], changing your relationship to your pain,” said Boris Heifets, a Stanford Medicine anesthesiologist who studies pain—as well as “rapid-acting psychiatric therapies,” including psychedelics, to Scientific American. Heifets is also part of the UCSF research team studying the potential impact of psilocybin therapy for chronic low back pain.

Heifets also emphasized that psychotherapy is the core of psychedelic’s effectiveness in mental health treatments. According to him, the most revolutionary thing about these substances is that they go beyond the medication alone. The research emphasizes the importance of therapy, psychological support, and connection.

We are not likely to see results published any time soon. However, the growing interest in this subject could lead to more companies and prestigious universities investing in research. Using psychedelic-assisted therapy to treat pain’s cognitive and physical components could provide a more holistic kind of relief. More importantly, psychedelics may one day prove to be a safer alternative for patients whose conditions and current treatments also put them at risk for opioid addiction.