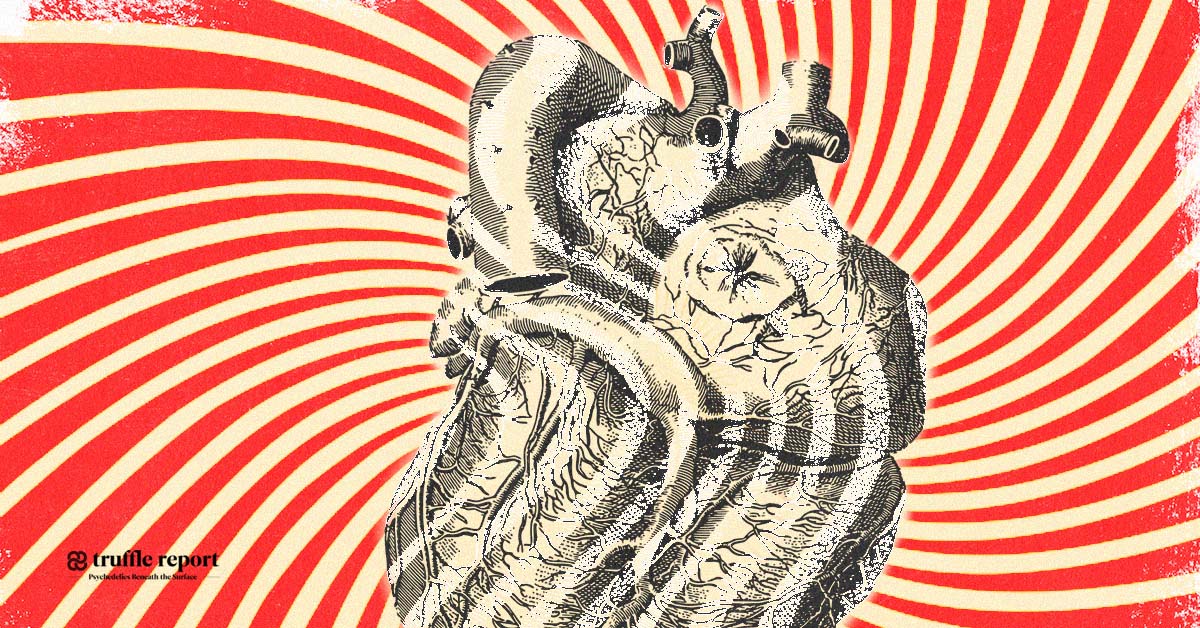 In recent years, there has been an increasing number of clinical trials and scientific studies analyzing psychedelic drugs and their effects on mental health. Although psychedelics are showing potential in psychotherapeutic applications addressing addiction, depression, anxiety, and PTSD, there is still not enough research into physical health. Truffle Report looks at the research around psychedelics, hypertension, and the cardiovascular system.

Heart disease, or cardiovascular disease (CVD), is the leading global cause of death, claiming an estimated 17.9 million victims annually according to the WHO. CVDs are a broad and persistent category of illness, including cerebrovascular disease, coronary heart disease, and rheumatic heart disease, among others. The COVID-19 pandemic has raised the risks associated these already prevalent health conditions.

For this study, researchers analyzed data from 171,766 respondents to the National Survey on Drug Use and Health Survey (NSDUH) between 2015 to 2018. The survey asked if the participants had ever used psychedelic drugs and collected information about overall health, body mass index,  heart condition, and cancer in the past 12 months. According to the report, “14% of the sample reported lifetime classic psychedelic use, which suggests that almost 34 million American adults have used a classic psychedelic at least once in their lifetime.”

Psychedelic Use and Hypertension

According to a study conducted at the University of Oxford and led by Otto Simonsson, lifetime classic psychedelic use may cause lower instances of  reported or diagnosed hypertension.

The study published in Hypertension analyzed data from the NSDUH (2005-2014), which included 381,682 respondents, to investigate the association between lifetime classic psychedelic use and reports or diagnoses of hypertension from respondents physicians in the year prior to their being surveyed.

“The novel findings in the present study suggest an association between lifetime classic psychedelic use and lower odds of hypertension in the past year, which demonstrates the need for more rigorous research to investigate potential causal pathways of classic psychedelics on blood pressure,” concluded the authors.

According to researchers, results can be explained by several factors:

The limitations include a cross-sectional model of the study and a lack of information around the set and setting, including context, intentions, psychological support, dose, and frequency of use of psychedelics.

Another recent study conducted at the University of Oxford and led by Otto Simonsson suggests that people who’ve used classic psychedelic at least once in their lifetime may be linked to lower odds of heart disease and diabetes.

The research, published in Nature Scientific Reports, used data from the NSDUH (2005–2014), which included more than 375,000 adults in the United States, to examine the associations between heart disease and diabetes and lifetime use of classic psychedelic use. Among the questions, participants had to answer whether or not they have ever tried MDMA, ayahuasca, psilocybin, peyote, or any kind of psychedelic drug, and if they have been diagnosed with heart disease or diabetes in the last year.

According to the study, the prevalence of heart disease or diabetes diagnoses among respondents who had never used a classic psychedelic was approximately 51% and 52%, respectively. The prevalence of heart disease or diabetes in the past year among respondents who had used a tryptamine (DMT, ayahuasca, or psilocybin) was approximately 41% and 45%. Lifetime use of classic psychedelics was associated with a 23% lower statistical chance of a heart disease diagnosis and a 12% lower chance of diabetes in the year prior to being surveyed.

The limitations include a cross-sectional model of the study and a lack of information around context, dose, and frequency of use of psychedelics.

Researchers believe there are several mechanisms through which psychedelics might influence cardiometabolic health, both directly and indirectly:

“The findings in the present study reveal associations between lifetime classic psychedelic use and lower odds of heart disease in the past year as well as lower odds of diabetes in the past year. It demonstrates the need for further research to investigate potential causal pathways of classic psychedelics on cardiometabolic health (i.e., lifestyle changes, mental health benefits, anti-inflammatory and immunomodulatory characteristics, and affinity to specific serotonin receptor subtypes),” concluded the authors.

“The direction of causality remains unknown,” Simonsson told PsyPost. “Future trials with double-blind, randomized, placebo-controlled designs are needed to establish whether classic psychedelic use may reduce the risk of cardiometabolic diseases and, if so, through which mechanisms.”