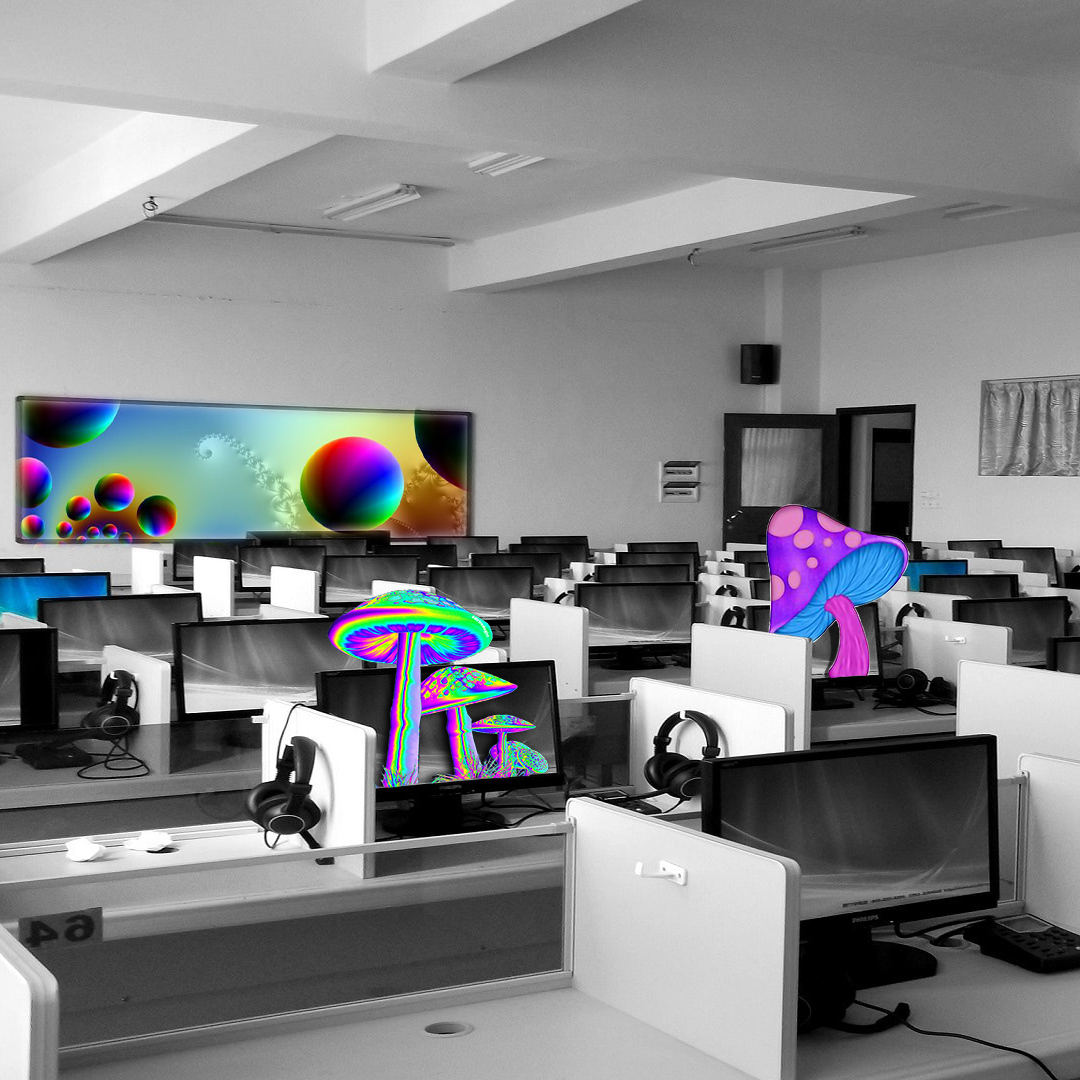 As the Editor of Truffle Report, I’ve spent the past six months learning about psychedelics and, by extension, microdosing. It’s been an education. My first contribution after starting that education was to realize the level of ignorance I was functioning at, and to help craft a statement promising to respect both the substances and cultures I’d end up researching. Since then, I’ve learned a great deal of history, ancient and modern. There’s been a lot of reading from old favourite authors of mine like Aldous Huxley, and quite a few modern psychedelic insights from the always-charming and informative Michael Pollan. Through all of it has come the chance to interview entrepreneurs and doctors, and to absorb a range of perspectives on substances I’d admittedly pigeonholed prior to taking this job.

At the risk of forming another such bird-shaped aperture, I’d like to share a growing anxiety of mine, one that may be obvious from the subtitle of this piece. Psychedelics are being touted for their potential, whether medical, therapeutic, or spiritual. While I share a sense of optimism and curiosity into what these substances can do for us, I also have no small amount of reservation about what they can do to us. Potential is not a one-way street to benefit.

While we’ve mainly focused on the seminal experience with mescaline that led him to write The Doors of Perception, Huxley is most famous for his novel Brave New World. His dystopian vision of a Fordist world-state, the end of history, monogamy, family, and religion, and humans being decanted rather than born to be socially conditioned from infancy has endured in popular culture. The novel is frequently compared to George Orwell’s 1984, and in fact, the two authors corresponded over their competing and complementary visions of what they saw as society’s inevitable slide toward totalitarian control. I’ve always preferred Huxley’s. If nothing else, it’s sexier.

All of this is fascinating, but only a background. What concerns me as psychedelics move forward is Brave New World’s preferred method of social control, a drug of unspecified chemical composition referred to as soma. It’s tempting to spend a fair bit of time on Huxley’s the philosopher’s choice of terminology. The point of soma within Brave New World is an end to anxiety over pain, over social interactions either romantically or in the workplace, over the fear of death, or indeed over complex and troubling thought of any kind, under the exhortation “a gram is better than a damn.” One character, important in the hierarchy of the fictional world, refers to it as having “All the advantages of Christianity and alcohol, and none of their defects.” Characters confronted with morally or intellectually challenging scenarios immediately resort to varying amounts of the drug, either resuming their work or taking a “soma holiday”. The peaceful, rigidly ordered, and emotionally stunted civilization Huxley envisioned would be impossible without it.

Microdosing and Tech’s Troubling Utopian Vision of Itself

At the time of Brave New World’s publication, soma was intriguing, a parallel of other casual substance use and abuse. It was also highly improbable in 1932. Pharmaceuticals, while hardly a new industry then, still had much to master in terms of sedatives, opiates, barbiturates, and amphetamines. These, combined with the limited awareness of hallucinogens of the time, were the likely inspiration for soma. The notion of a substance that could take the user or on a consequence-free “holiday” in large doses with no trace of a hangover, or simply be taken in small doses to cease worry and increase productivity, was fanciful then. Less so now.

While still a long way from being regulated and standardized, much less administered by a World-State, microdosing bears to me many of the hallmarks of soma. To be clear, I’m not discounting the increasingly well-documented possibilities of low-dose psychedelic use in the treatment of anxiety, depression, or addiction. Neither am I dismissing out of hand the personal accounts of online microdosing communities. On the contrary, I suspect microdosing’s ability to increase productivity via focus and entry to flow states will only become more accessible with better research and understanding. This is currently underway. It’s in the workplace culture that leads to this consumption that the problems arise.

Microdosing is particularly popular among the young, booming, and futurist tech sector of Silicon Valley, itself a trendsetter in the corporate and cultural world. The ingestion of sub-perceptual amounts of psychedelics is by no means the only performance-enhancing practice growing in popularity there. It’s an environment built on capital, risk, and a vision of utopian connectivity through technology that has a history of blithely, perhaps deliberately and maliciously overlooking the negative consequences of its actions. Such, it would seem, is the cost of innovation, as its power and influence over our lives grows.

A Psychedelic Answer or the Beginning of a New Problem?

Unsurprisingly, the pressure to perform and deliver results among these firms leads many employees to look toward microdosing or nootropics to cope with the resulting anxiety and depression, or simply to stay competitive amongst their peers. The term I’ve heard a great deal is “peak performance.” Emotional well-being can easily take a back seat to productivity. The substances involved in coping with it may be novel, but not the phenomenon, in any era, or in any field of work. What relates it back to Huxley and Brave New World is that psychedelics appear to have the potential to act both as a psychological balm, providing a greater feeling of perspective and personal agency, while in microdosing form being so ubiquitous and approachable within the culture as to seem normal.

Among the entrepreneurs, researchers, and literature I’ve encountered on the subject, a consistent thread appears; the need for integration. Broadly speaking, this means that psychedelic use needs to be guided, before, during, and after the experience, by an outside party, and ideally in as professional a way as possible, in order to make sense of the experience. What this means in practice will necessarily vary from person to person. What might integration mean in the context of corporate microdosing culture? In its contribution to productivity for productivity’s sake? The psychological impacts and pressures of the tech industry are well documented, and only likely to increase if its business model continues to succeed. What happens to the mental health of the worker when the integrative aspect of the treatment is part of the culture of the workplace? When the plane of consciousness you are asked to exist upon is determined by professional pressure?

Soma is a work of fiction. Even if it weren’t, psychedelics are not soma. For one thing, they appear to enable creative or lateral neurocognitive function rather than suppressing it. A substance that facilitates thinking outside of the box would have been anathema to the engineered humans of Huxley’s dystopia. It’s precisely these mental functions that their fictional society sought to clamp down upon.

The similarities lie elsewhere. Soma is a quick-fix intended to stymie larger individual psychological and social issues. Microdosing, until proven otherwise, should be treated as the same. I think I should state that I don’t in any way intend to hold the existing mental health treatment system up as a model. It is verifiably ineffective. Among microdosers interviewed by publications such as Wired and The Financial Times, these substances are frequently used to treat ongoing mental health issues, supplementary to or instead of prescribed medication. Is this for personal wellness? Is it for professional productivity? Is there a line between the two, and if so, how fluid is it? The practice itself is still imperfect, and appears to have equal potential for negative results like miscalculated doses, migraines, and actual increases in stress and anxiety.

In the closing chapters of Brave New World, one of Huxley’s characters refuses to take soma, or to participate in the freewheeling sexual escapades that constitute the World State’s other major form of emotional release. Discontented with the social structure, he is described by another key character as demanding “the right to be unhappy.” His end is tragic. Huxley had his religious and philosophical reasons for this, likely stemming from his own feelings about early 20th-century society.

Is microdosing an answer to unhappiness? How about high-dose psychedelic therapy? For some, it seems that way, and the last thing I want is to deny treatment to anyone suffering from anxiety or depression on merely philosophical grounds. But what about the rest of us? Those looking to optimize, or achieve that peak performance. “The Worried Well,” as one recent interview subject aptly said. Do we need this?

The impression I’ve gotten from the research and interviews I’ve done is of a coming renaissance, enlightenment brought on by psychedelics. Is this meant to set us free, or to make us happy? Will regimens of psychedelic medicine liberate our minds, or simply make us blissfully accept whatever comes? It’s a philosophical question, almost certainly oversimplified, but one, I think, that Aldous Huxley would approve of. Whichever side I end up favoring, I want to believe that a shift in perspective is possible, that these substances can live up to some of the hopes being pinned on them, and bring about a positive change. Given how easily happiness is commodified and tied to production, productivity, and consumer behavior in our own world as in Huxley’s fictional one, I’ve chosen to temper my optimism for the moment.