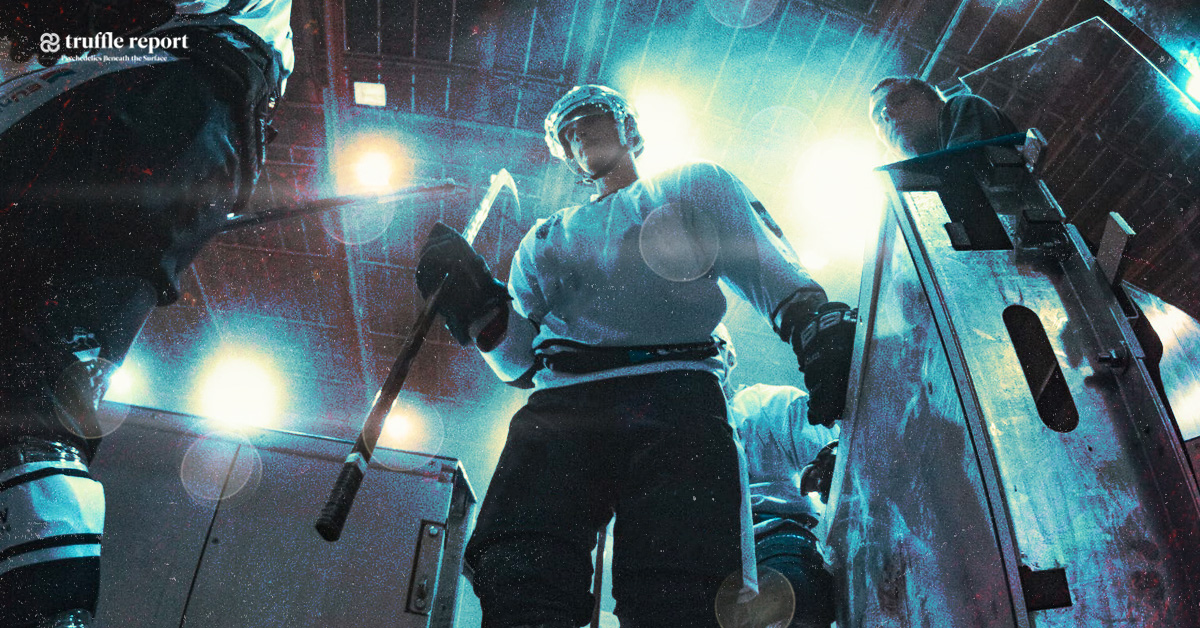 Any discussion of athletes and psychedelics should be preceded by a conversation on mental health, and the physical and psychological effects of high-performance sport. One of the most memorable moments from the Tokyo 2020 Olympic Games, held in July and August of 2021, wasn’t a sporting triumph at all. It was when American gymnast Simone Biles, who is widely considered the GOAT (Great of All Time) in gymnastics, chose to withdraw from the team competition in order to focus on her mental health.

Biles is not the first athlete to speak up about the stress and mental health struggles associated with being a professional athlete. Given the potential of psychedelic-assisted therapy to address various mental health conditions, these substances once pigeonholed and stigmatized as recreational psychedelic drugs are being considered as a possible way for top performers to improve their mental health and, in turn, performance.

Truffle Report previously spoke to two-time Stanley Cup Champion Daniel Carcillo, former professional hockey player for the Chicago Blackhawks and current CEO of Wesana Health, about the therapeutic value of psychedelics, their effects on athletes, and potential to use psychedelic therapies in the treatment of head trauma resulting in traumatic brain injury, not to mention its related mental health conditions.

Recently, we had the chance to sit down with former Philadelphia Flyer Riley Cote to continue the discussion into the potential therapeutic benefits of psychedelics in professional sports.

Athletes and Psychedelics: Mental Health and Lifestyle in Professional Sports with Riley Cote

A 2020 research paper titled ‘Advancing elite athlete mental health treatment with psychedelic-assisted psychotherapy’ published in the Journal of Applied Sport Psychology was the first paper to outline psychedelic drugs’ therapeutic potential on athletes’ mental health. Researchers concluded that, “the field of sports psychology and psychiatry would be well advised to take note of this promising research area, and to begin a dialogue on how to best address the challenge and explore the opportunities of psychedelic medicine for elite athletes.”

A former National Hockey League (NHL) enforcer for the Philadelphia Flyers, Riley Cote agrees that experiences with psychedelics — specifically psilocybin, the primary compound in magic mushrooms —  could play a massive role in the bubble of professional sports. He tells Truffle Report: “This could revolutionize the way athletes function, perform, and recover.”

Cote, who retired from the league in 2010 at age 28 after taking part in more than 200 hockey fights, turned to plant medicine, yoga, and nutrition to improve his mental and physical health. “[My career] took its toll mentally, physically, emotionally, and spiritually,” he tells Truffle Report. “As hard as I was going on the ice, I was going off the ice with partying, drinking, and living unsustainably. Not a lot of mindfulness and a lot of ego. I wasn’t feeling aligned, and I was living my childhood dream at the time.”

When he decided to retire, Cote says he hung his hat on holistic healing and made significant changes in his life. “I was using psilocybin mindfully as a meditative agent, sitting in stillness by myself and making sense of it all,” he explains. Cote is now an advisor at psilocybin production and research company Wake Network, working on its neurological health research and expanding its athlete and veteran arm with the benefit of his own experiences. He also co-founded Athletes for Care — a non-profit empowering athletes to advocate for health and other issues..

Cote tells Truffle Report that the potential benefits of psychedelics can manifest for athletes in two ways: through macrodosing and microdosing. “Macrodosing brings an obvious awareness of your environment, being, and behavior, and spiritual realizations can happen in the deeper dives,” he says. “It’s super beneficial for everybody, but for athletes, it can help elevate performance by optimizing the brain, bringing about creativity, and finding ways to manage the noise, stress, and pressure a bit better.”

While we are still waiting on formal science, there is anecdotal evidence that psychedelics can be used to enhance athletic performance.

One highly publicized example is that of Pittsburgh Pirates pitcher Dock Ellis’s well-reported acid trip. Ellis famously threw a no-hitter during a 1970 game while tripping on lysergic acid diethylamide, or LSD. According to an essay by James Oroc, LSD has also fuelled many achievements in the world of extreme sports, including heli-skiing off of Alaskan peaks, motorbike racing, surfing, and mountain climbing above 8,000 meters in the Himalayas. Ibogaine was also reportedly used as a stimulant by athletes from the 1930s until the 1960s when it was banned. Should LSD and other psychedelics be considered performance-enhancing drugs?

Cote tells Truffle Report that psychedelics can indirectly improve athletic performance, but implies that this likely has more to do with overall mindfulness and better quality of life. “I’m not sure you could say microdosing directly affects, for example, speed, but it affects focus, concentration, and training, which in turn would correlate to improved speed or stamina,” he says. “All performance increases when you are more present and able to focus and concentrate on something.”

He adds that it’s often the mind that gets in the way of athletic success. “I’ve been on both sides of the fence, as a player and a coach, and I’ve seen so many guys with so much talent never make it or make it for a bit then disappear,” he says. “They overthink, they overstress, they panic from too much pressure.”

Could a psychedelic experience be helpful?

“Think about how much money and time people spend on the physical body to become a supreme, elite athlete. As physical specimens, we can’t really get much faster than the way athletes are today — it’s the mind that we’ve forgotten about. We have the ability to train the mind. And there’s this whole world outside of sports of human optimization, for musicians, creators, and everyday people.”

Reducing Athlete Opioid Use: Is Psychedelic Therapy the Answer to Chronic Pain and Concussions in Pro Sports?

Cote tells Truffle Report he hopes to see psilocybin become an alternative to pharmaceutical drugs such as opioids for athletes in organizations and leagues. According to a 2020 review, anywhere between 4.4% and 4.7% of professional athletes at any given time are using opioids. Over a National Football League (NFL) career, opioid use rises to 53%, and high school athletes have lifetime opioid use rates ranging from 28% to 46%.

Sadly, these drugs are habit-forming, and an estimated 3% to 19% of people taking prescription pain medications develop some form of addiction or dependence on them, contributing to the broad effects of the opioid crisis.

“[Sports leagues] claim to take care of their players and care about their health, yet they are giving them a toolbox that’s half empty, or whatever is in there is poison,” Cote says. “On the other hand, psilocybin or cannabis or anything else that is non-addictive has a lower threshold for abuse than opioids, sleeping pills, or even alcohol. I would like to get to a point where we’d no longer see an opioid or sleeping pill in the locker room.”

But Cote is optimistic about athletes and psychedelics in general, and the role of psychedelics in addressing this issue, having noticed how the level of consciousness around these substances and their therapeutic effects has increased in the time since he retired from the NHL. “Not too long ago, there were players using methamphetamines, yellow jackets (a dietary supplement containing the stimulant ephedra), and cocaine to jack themselves up — now we are talking about microdosing psilocybin mushrooms to find flow state,” he says. “The level of consciousness in the last 15 to 20 years, in hockey specifically, has increased dramatically.”