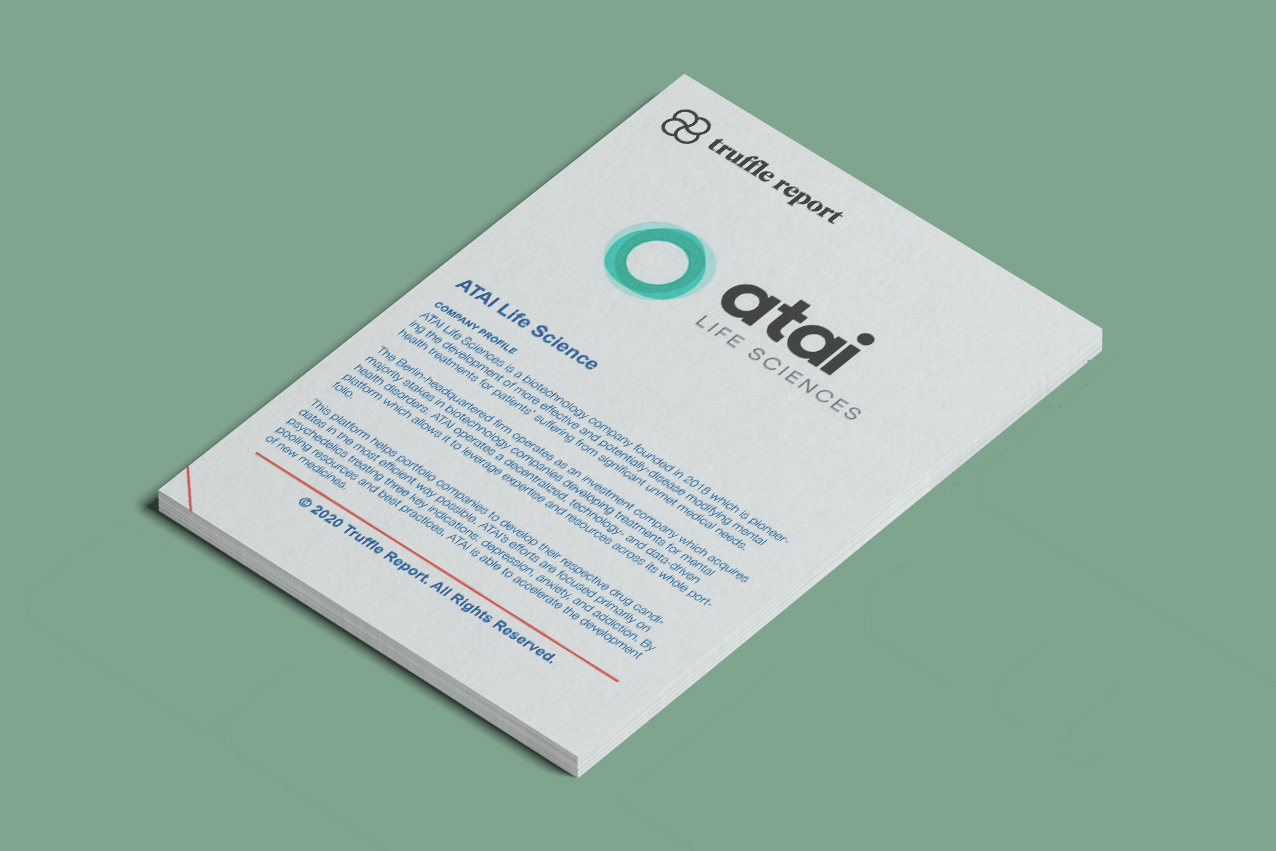 It operates as an investment company that acquires majority stakes in biotechnology companies developing treatments for mental health disorders. As a result, ATAI operates a decentralized, technology- and data-driven platform which allows it to leverage expertise and resources across its whole portfolio.

This platform helps portfolio companies to develop their respective drug candidates in the most efficient way possible. ATAI focuses its efforts primarily on psychedelics treating three key indications: depression, anxiety, and addiction. By pooling resources and best practices, ATAI is able to accelerate the development of new medicines.

Additionally, ATAI also has a digital therapeutics platform, Introspect, which it launched in June 2020. The platform pairs the development of digital tools or devices with concurrent clinical research into certain compounds on the company’s platform to enhance their therapeutic impact. This helps deliver personalized and scalable treatments to those who might not otherwise be able to access high-quality care. Moreover, by following a modular approach to development, technologies developed for one indication or compound will be more easily repurposed for others being studied by the company.

The company has backing from top venture capitalists such as Peter Thiel, Steve Jurvetson, Thor Bjorgolfsson and Mike Novogratz.

Compass Pathways trades on the NASDAQ exchange under the ticker “CMPS”. It is looking to develop a proprietary psilocybin therapy through a late-stage clinical trial for patients with treatment-resistant depression. ATAI was an early-stage investor.

Its leading drug candidate, COMP360, has been designated a Breakthrough Therapy by the U.S. Food and Drug Administration (FDA), for treatment-resistant depression (TRD). Moreover, it is conducting phase IIb clinical trials of psilocybin therapy for TRD at 22 sites across Europe and North America.

In January 2021,  ATAI acquired a majority stake in Recognify Life Sciences, a company developing a treatment for Cognitive Impairment associated with Schizophrenia (CIAS). Recognify’s lead compound, “RL-007”, previously called FSV7-007, has exhibited a modulating effect on three mechanisms that are central to learning and memory: the cholinergic, NMDA, and GABA type B receptor systems.

RL-007 is a Phase II ready asset that has previously been evaluated in nine clinical studies. Importantly, three of these clinical trials demonstrated improvements in verbal learning and memory. To date, a total of 508 unique subjects have been given the dose.

Above all, what is truly unique about RL-007 is that it enhances mechanisms of neuronal signalling, learning, and memory without the side effects associated with other compounds acting on these mechanisms.

In January 2020, ATAI announced an investment in two joint ventures with DemeRx for the development of ibogaine and noribogaine. DemeRx is a U.S.-based clinical stage pharmaceutical company developing ibogaine and noribogaine to treat Opioid Use Disorder (OUD). DemeRx is currently in the process of submitting a Clinical Trial Application for a phase II study in opioid-dependent patients.

OUD represents a significant unmet medical need, especially in the United States. In 2018, 2.1 million Americans met the diagnostic criteria for OUD, while 47,600 people died from opioid overdoses. Current treatment options for OUD are limited and carry risk of significant side effects and abuse potential. Overall, relapse rates across substance use disorders are estimated to be between 40 and 60 percent. This figure is due in part to the lack of effective therapeutics and low patient compliance.

Together with DemeRx, ATAI is hoping to develop novel approaches to treat as well as prevent opioid addiction.

In September 2019, ATAI partnered with GABA Therapeutics, a California-based biotechnology company. GABA is developing GRX-917, a deuterated version of etifoxine. This drug is intended as a therapy for anxiety, depression, and a range of neurological disorders.

The drug entered phase I trials in January 2020. Clinical studies show that etifoxine has comparable speed of onset and anxiolytic efficacy as the world’s top two selling benzodiazepines (Xanax and Ativan). However, unlike benzodiazepines, it lacks the sedation, amnesia, and ataxia side effects and is non-addictive in nature.

Kures is developing deuterated mitragynine as a safer alternative for pain management and opioid dependence therapy.

In January 2020, ATAI invested an undisclosed sum in Pennsylvania-based Neuronasal. The company is looking to develop N-acetylcysteine (NAC) as the first ever drug treatment for mild traumatic brain injury (mTBI), otherwise known as a concussion.

NAC, a derivative of cysteine, is involved in synthesizing glutathione, an antioxidant that helps in preventing damage to cells after an injury. During a concussion, increasing glutathione levels could protect brain cells from reactive oxygen species, which are oxygen-containing molecules that react easily with other molecules and can damage DNA, RNA, and proteins.

It has also been shown to prevent persistent symptoms, which are seen in ~50% of concussion sufferers. These symptoms include impaired balance, sleep-disturbance, memory problems, confusion, headaches and, hearing loss.

Neuronasal’s intranasal approach enables direct nose-to-brain delivery, allowing for significantly lower doses and outpatient treatment. Given its apparent efficacy in disrupting the underlying neurochemical cascade, intranasal NAC has the potential to induce a fundamental shift in the natural course of the condition for hundreds of thousands of people.

The emergency use intranasal formulation has superior bioavailability, rapid onset, and reduced side effects compared to oral or IV dosing.

In January 2019, ATAI acquired a majority stake in Perception Neuroscience, a New York-based biopharmaceutical company. Perception is developing arketamine for use as a RAAD (e.g., suicidality). The company expects arketamine to be more efficacious than current FDA-approved antidepressant therapies. Arketamine has been shown to have a superior efficacy and safety profile compared to racemic ketamine and esketamine.

The use of MDMA for the treatment of PTSD has been researched extensively by the Multidisciplinary Association of Psychedelic Research. Moreover, results from Phase II studies show that 56% of the patients studied no longer met the criteria for PTSD two months after their final MDMA-assisted psychotherapy session.

EmpathBio will look at MDMA derivatives with different pharmacological profiles than MDMA. This might allow for the entactogenic effects of MDMA to be separated from some of its known adverse effects. If ATAI is successful in this endeavour, few of the transient physiological changes caused by MDMA may become avoidable. This will in turn expand the pool of PTSD patients who may be medically eligible for therapy.

Viridia’s DMT product will eventually be paired with a digital therapeutic being developed by Introspect Digital Therapeutics. Clinical trials are predicted to begin in the first half of 2021.

Apart from acquiring stakes in drug development companies, ATAI also actively invests in ancillary technologies which complement and help accelerate its drug development programs. Here are two such entities in which ATAI holds a stake.

EntheogeniX Biosciences is a joint venture between ATAI and Cyclica initiated in November 2019. The purpose of EntheogeniX is to develop & leverage Artificial Intelligence and computational biophysics to streamline drug discovery across ATAI’s portfolio. The technology is brought by Cyclica, a Toronto-based company which already has existing partnerships with several pharmaceutical companies across a wide range of therapeutic areas. Cyclica’s integrated and end-to-end drug discovery platform designs high precision molecules and provides a holistic understanding of its activity. This will go a long way in helping to optimize onset times as well as the neurogenerative, anti-inflammatory, and hallucinogenic effects of psychedelics.

Another AI company in which ATAI has been investing is Innoplexus. This company leverages AI and machine learning to provide deeper and real-time insights into the life sciences data universe. This will serve to accelerate the drug development process at every stage from drug discovery to commercialization.

The proceeds from the financing will be used to fund pre-clinical and clinical development of ATAI’s existing mental health programs, to expand its drug candidate pipeline and further advance ATAI’s platform technologies.

The company expects the proceeds to provide the necessary runway to accomplish several key clinical milestones including phase II data readouts for arketamine in treatment resistant depression at Perception Neuroscience and ibogaine in opioid use disorder at DemeRx, as well as the completion of phase I and initiation of phase II trials at four other programs.

To date, including this latest Series C funding round, ATAI has raise a total of $210mn from investors.

ATAI Life Sciences is centered around mental health biotechnology, leveraging a tech- and data-driven platform that focuses on psychedelic compounds with non-psychedelics and artificial intelligence. Its portfolio includes several different products, including psilocybin for treatment resistant depression; ibogaine for opioid use disorder; arketamine for treatment resistant depression; and deuterated etifoxine for anxiety.

Its 2021 IPO plans could see it valued at anywhere between $1-$2 billion according to industry sources. There is no doubt that we will see immense investor interest once it lists and investors can keep this stock on the radar when it does eventually IPO.