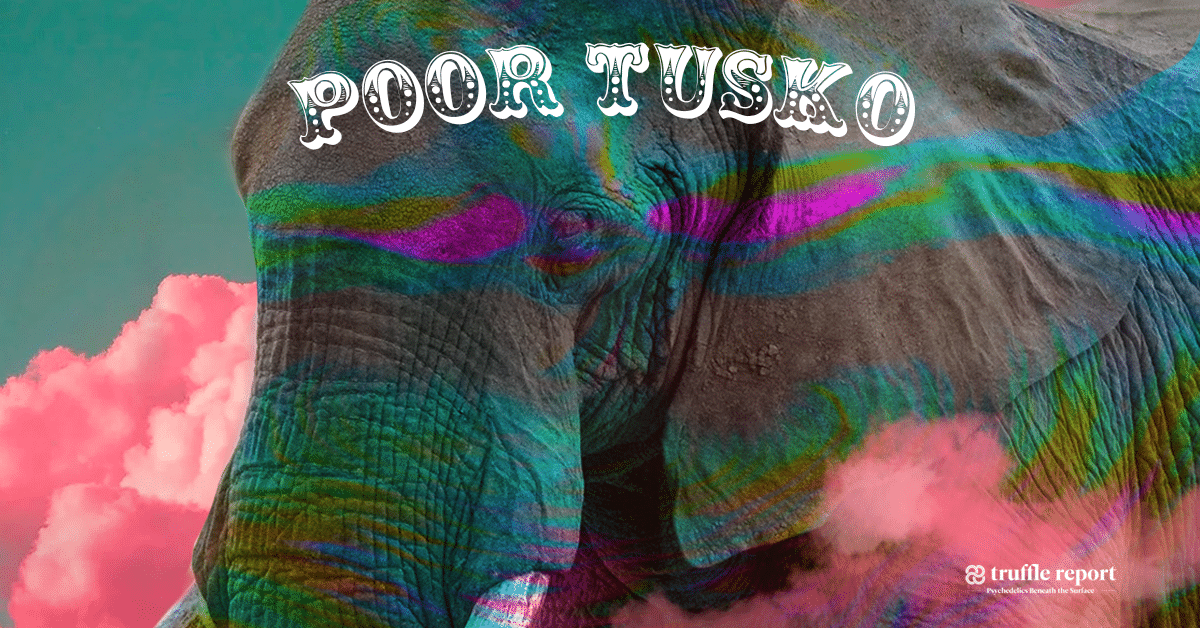 Animals and Psychedelics: Experiments and Natural Use

Humans have used a range of psychedelics to expand the limits of our minds for recreational or spiritual purposes for most of our recorded history. Some of them can help us relieve physical or emotional pain. However, humans aren’t the only ones who pursue psychedelic experiences. Though its largely anecdotal, there is evidence from around the world showing instances of different species of animals seeking out and consuming psychedelics. Dogs, monkeys, goats, and numerous other denizens of the animal kingdom seem to enjoy altering their consciousness with psychedelic compounds found in plants and mushrooms just as much as humans.

Some scientists believe that animals and humans are biologically wired to seek hallucinogenic drugs for the same reasons, to boost and sharpen senses. The idea echoes the evolutionary perspective of Terence McKenna’s Stoned Ape Theory about how our early hominid ancestors became human through ingesting psychoactive substances. Others suggest that animals’ natural instinct is simply to find the psychoactive effects of serotonergic psychedelics pleasurable, just like people.

Italian Ethnobotanist Giorgio Samorini, in his book Animals and Psychedelics: The Natural World and the Instinct to Alter Consciousness, states that it is important to distinguish the intention of animal psychedelic use. Were these creatures influenced or directly induced by humans to consume psychedelic drugs, or are these behavioral responses natural?

It has been proved through numerous experiments and some pretty amazing examples that psychoactive substances that affect humans also affect animals.

A famous study on spiders under the influence of different  recreational drugs and substances, including LSD, mescaline, and caffeine, was focused on making them spin webs at a more convenient time of the day. Instead, the study showed that spiders generally spun smaller and more irregular webs while under the influence.

Another famous study by neuroscientist and avid enthusiast John C. Lilly involved examining the sensory processing dolphins on LSD. Lilly had been administering 100 microgram doses of LSD to dolphins to study the potential therapeutic effects of psychedelic drugs. It showed that the drug stimulates a socializing behavioral effects in dolphins, making them more vocal than usual, and causing them to approach humans without fear.

Possibly the most controversial psychedelic drug study (and we use the term loosely here) involving animals centered around a bull Asian elephant named Tusko. Two scientists, Dr. Louis Joylon “Jolly” West and Dr. Chester M. Pierce darted poor Tusko with 297 mg of LSD (thousands of times the recreational dose considered advisable for humans) to see whether it would induce a condition called musth. Musth is a period of heightened testosterone production and high aggression in a bull elephant.

The experiment is quoted as evidence of LSD’s toxicity, as it succeeded only in causing Tusko’s death, though it is far more likely that the various other substances the pair used to try and revive Tusko were responsible for these extreme adverse effects. Thankfully, the academic practice of giving psychoactive substances to animals has been refined somewhat since then.

According to anecdotal accounts of mushroom consumption, goats have been getting high on purpose for even longer than humans. They consume psilocybin and can even get possessive about their feeding grounds. Under the influence of psychedelics, goats will run awkwardly, shaking their heads back and forth.

In Ethiopia and Yemen, goats still go wild for khat, a euphoric stimulant plant chewed on a daily basis by millions of people in the region. The effects of khat are similar to amphetamines, and include mental alertness, excitement, and euphoria.

Many types of deer will eat psychedelic mushrooms such as fly agaric (Amanita muscaria), a hallucinogenic mushroom with a bright red head and white spots. Deer under the influence will start running around, making strange noises, and isolate themselves from the rest of the herd, as well as other wild animals.

Cows, as well as sheep, donkeys, and horses, will sometimes seek out a plant called locoweed. The most fascinating accounts by far have been reported in North America. According to Samorini, such behaviour was first described in 1873 in California, and resulted from observing the actions of horses and cows browsing at pasture. The animals showed a remarkable propensity for differentiating between locoweed and other grasses, after which they would consume only locoweed.

As a result, animals were in a state of fury and intense agitation. With symptoms increasing exponentially over a short period of time. If an animal has consumed locoweed for two weeks or more, it will begin to show signs of toxicity, including weight loss, miscarriages, and neurological damage.

These wild animals have an interest in the leaves of the yage vine which grows throughout the Amazon Rainforest. Yagé contains psychoactive alkaloids, and is an essential component to the psychedelic effects of ayahuasca preparations. A chemist at Cornell University suggested that jaguars might do this for health reasons because ayahuasca “purges them of gut parasites… the alkaloids sabotage the nervous systems of parasitic worms”. When jaguars are under the influence, they become calm and goofy.

One of the most familiar patterns of behavior is that of cats and catnip. However, only 50-70 percent of domestic cats get high on catnip. The catnip response is inherited, so some cats lack the gene. In some cases, a cat may be too young. The most intense experience starts with the smell. Cats start rolling, flipping, rubbing and meowing. Usually, the effect lasts about 10 minutes, after which the cat loses interest.

Does Giving Psychedelics to Hunting Dogs Lead to Enhanced Perception?

A study published in the Journal of Ethnobiology, reports that at least 43 species of plants with psychedelic properties have been used across the globe for boosting the hunting abilities of dogs. The Indigenous Ecuadorian Shuar and Quichua peoples use at least 22 different psychedelic plants for this purpose — including ayahuasca and four different types of brugmansia.

Ecuadorian Shuar believe that dogs are a gift from Nunkui, the earth mother. According to the Quichua, dogs are gifts from sachahuarmi or sacharuna (forest spirits). They believe that dogs dream and that they have souls. When their dogs become ill, these tribes use the plants as veterinary medicine. Ficus helps fight parasites, and a mix of tobacco and ginger is applied to improve night vision. The use of psychedelic plants to improve the hunting ability can be found in other South American countries as well as the Caribbean, Southeast Asia, Papua New Guinea, and the Solomon Islands.