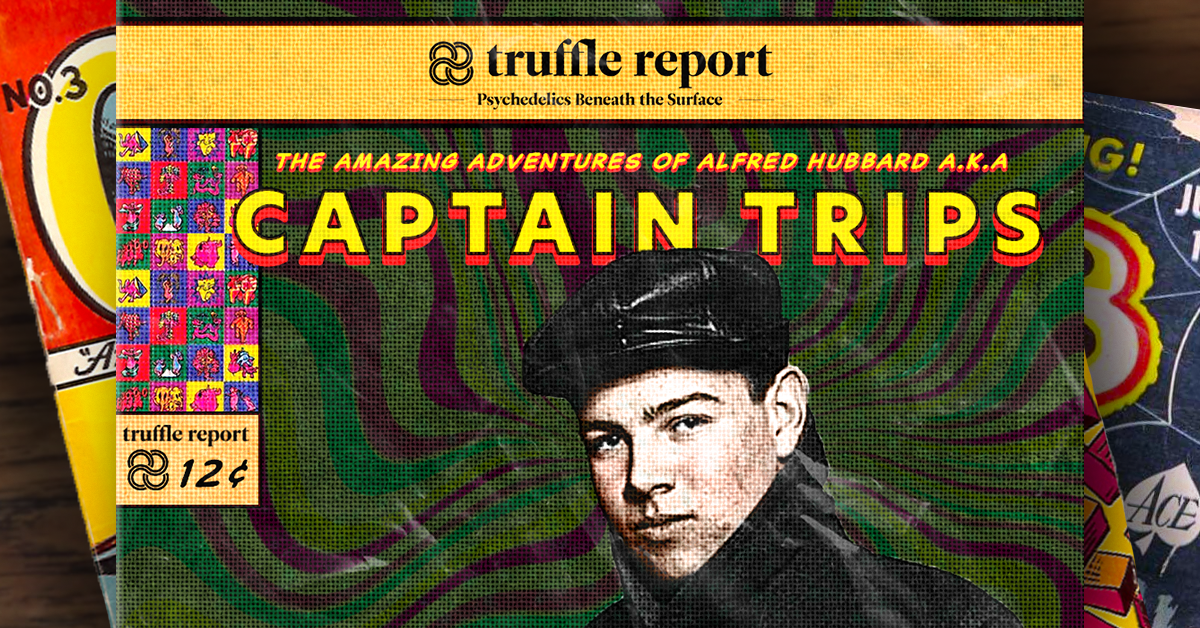 It shouldn’t come as a surprise that the history of psychedelics is full of colourful and intriguing characters. Some of these wore tie-dye and drove party busses, while others wrote books promoting themselves as sorcerers. For many, the counterculture was the making of their careers. Not so for Alfred Hubbard. The one-time inventor, bootlegger, spy, and smuggler turned psychedelic luminary had been exploring clinical psychedelics since the early 1950s, introducing LSD to countless others.

Hubbard’s efforts to bring the drug, and his own trial-and-error refinements in its therapeutic administration, to a wider audience, were a fascinating experiment both in informal science and social networking. By the end of his life, Alfred Hubbard became known as “The Johnny Appleseed of LSD” and “Captain Trips”, alternately working alongside and feuding with the government and medical establishments, as well as psychedelic contemporaries, in the promotion of psychedelic healing and enlightenment.

Hubbard is the most delightfully frustrating sort of historical figure, with buckets of anecdotes to his name, and very few remaining primary sources to chronicle the scant details of his youth and early career.

Born in Kentucky in either 1901 or 1902, he would tell people in later life that his upbringing was so impoverished that he didn’t own a pair of shoes until he was twelve. Despite dropping out of school in the eighth grade, Hubbard as a teenager had a keen interest in machinery and electronics. He developed informal but formidable engineering skills working at mining camps with his father, eventually patenting an “energy transformer”, allegedly a kind of radioactive battery. Despite doubts generated by years of dubious publicity stunts, he ended up selling a stake in the patent for seventy-five thousand dollars. The invention itself came to nothing, and was later featured in a Popular Science article on technological hoaxes. It was this grifting genius that would lay the foundation of Hubbard’s mystique.

Well before the discovery of LSD and his time as Captain Trips, the 1920s found Alfred Hubbard either driving a taxi or operating a radio store in Seattle with his wife during prohibition. Perhaps both. This was, unquestionably, a cover for his role as a radio signaller for the famed Olmstead bootlegging operation.

If the sources and biographies of the psychedelic era are to be believed, Hubbard ended up living with Olmstead, using his engineering know-how to maintain the “King of the Bootleggers’” fleet of ships, and beginning Seattle’s first radio station in the process.

By this point, Olmstead had garnered the attention of federal law enforcement. Following a raid on his boss’s house, Hubbard approached the head Prohibition agent with an offer to inform on Olmstead in exchange for his name being dropped from the indictment, and appointment as a prohibition agent himself.

Somehow, Hubbard got his way, and the following years saw him playing both sides against one another, using his position to collect both a salary from the Prohibition Bureau for informing on Olmstead, and payoffs from bootleggers for tipping them off to the Bureau. Eventually, the FBI got wise, and Hubbard spent 18 months in prison.

The Spy and Nuclear Entrepreneur

Biographers record that after being released, he earned his Master of Sea Vessels certification in California, officially adding Captain to his name. If the source material is to be believed, he ended up working for the Office of Strategic Services, or OSS, the predecessor to the CIA. Hubbard’s task was a wartime smuggling mission, for which he moved up to Vancouver, British Colombia.

Different versions of the story from different authors have him smuggling ships into Vancouver to be turned into destroyers for use in Europe, and flying airplanes to the Canadian border for sale to the Allies prior to American entry into the conflict.

Hubbard’s heavily redacted FBI file is the best primary source remaining, stating that he worked at times for the ATF, FDA, DOJ, and Canadian Special Services. It’s a compelling alphabet soup of organizations to use as credible covers. Whatever Alfred Hubbard’s actual work entailed, it was sufficient to earn him a Presidential Pardon for his smuggling charges from the Truman administration.

While it’s hard to say exactly what he was up to during and immediately following WW2, Alfred Hubbard had made himself an undeniably wealthy man. With his millions of dollars, connections on both sides of the border, and the growing interest in all things nuclear as the cold war got rolling, Hubbard founded the Uranium Corporation in Vancouver with his wife Rita, dedicated to marketing radioactive materials. The venture didn’t last long. For all his success, Alfred Hubbard was an unhappy man. LSD would alter the course of his life, giving him what he felt to be his true calling.

Here the details of Alfred Hubbard’s life begin to come into clearer focus, though only just. According to one account, Hubbard, a devout Catholic, received a vision from an angel while hiking, informing him that he would play a role in “something tremendously important” to the future of humankind, which would be coming soon. The angel was, apparently, a bit thin on the specifics. It wasn’t until Hubbard first read about and then ingested LSD for the first time in 1951 that he felt he’d found his purpose. He reported to have witnessed the beginning of creation, time and space on a cosmic scale, and his own parents conceiving him during his first trip. It was understandably revelatory.

Hubbard then managed, through some combination of government or business connections, to obtain a massive amount of LSD direct from Sandoz Laboratories, the employers of its inventor, Albert Hoffman. The exact volume is up for debate, being recorded at six-thousand vials, one liter, or forty-three cases depending on the source. This was kept either in a bank vault in Zurich, or buried in Death Valley. Regardless, Hubbard was not often found without a leather satchel containing a supply of LSD, which he told Hoffman he planned to use to “Liberate Human Consciousness.”

The list of those Alfred Hubbard eventually introduced to LSD through collaboration with psychologist and researcher Humphry Osmond is massive, with some estimates at up to six thousand people. Of particular note is Myron Stolaroff, an early figure in the history of the Silicon Valley tech industry, who would go on to introduce the drug to Steve Jobs. J. Edgar Hoover, who Hubbard claimed as a friend, declined.

The Philosophy and Legacy of Alfred Hubbard

Hubbard’s character is, if possible, even harder to pin down than the historical facts of his life. He dressed like a paramilitary, talked tough, and had the grit to go from rags to riches through occasionally unscrupulous means. He also spoke softly and passionately of the divine, of spirituality, and of love. Unlike his rough contemporary Timothy Leary, he did not try to disseminate LSD to the masses, but rather sought to work it from the top-down, through key political, medical, and cultural figures.

Perhaps his greatest contribution to the practice of psychedelic therapy was the creation of the “Hubbard Room.” This gruff, gun-toting man intuited that the mind on LSD would rebel against sterile hospital settings, and so tailored his suites to look something like a living room. It took a perspective outside the medical sphere to understand that pictures, music, soft light, candles, and diamonds, were the key to relaxing patients. Captain Trips had an impressive track record, and a circuit of medical establishments and professionals keen to work with him throughout North America. These included sessions at Stanford for a government think tank, which led to speculation on Hubbard’s involvement in MK-Ultra.

The counterculture and the Summer of Love brought an end to Captain Trips. After investing so heavily in LSD, its criminalization in 1967 ruined Alfred Hubbard’s finances. He lost most of the assets accumulated from previous ventures, including his private island. Hubbard would move to Menlo Park, California, and unsuccessfully petition the government to allow LSD therapy for cancer patients to resume. Working for the Stanford Research Institute in an investigative capacity, he vocally opposed the west-coast counterculture use of LSD as a street drug. These years saw him participating in at least one major drug bust, involving Grateful Dead sound engineer and LSD chemist Owsley Stanley III. Alfred Hubbard died in 1982, after spending his final years living in comparative poverty in a trailer park in Casa Grande, Arizona.

A Lesson for the Modern Psychedelic Space

Through a checkered past that created a network of public and private sector contacts, Alfred Hubbard was perfectly positioned to act as the first great LSD influencer. His belief that key minds had to be changed first ran aground on the rocks of 1960’s counterculture.

The voyages of Captain Trips were brought to a close by those who took the opposite approach. Hubbard, for how prolific he became, was still only sneaking LSD out of the lab with relatively little fanfare. Timothy Leary began catapulting it to eager crowds of recipients, courting as much press as he was able, and panicking traditional establishments. Despite their obvious differences, the two were cordial enough to be seen together in this vintage home video of a meeting of psychedelic researchers taken in the 1970s.

With both Humphry Osmond and Sidney Cohen present as well, Hubbard is heard saying that the first time he met Leary was at Harvard in the early 60s. Had the two men jibed then, coming to an agreement or compromise on how to disseminate LSD together, the world might be a very different place today.

What can we learn from this to help our own psychedelic ventures move forward? First, that much of LSD’s positive impact can be traced back to the social interactions of one quietly efficient and very determined semi-professional researcher. Alfred Hubbard was most effective because he was more concerned with results than feeding his own image. Second, and perhaps more important, is that psychedelics have had more than one identity within our culture in the recent past.

Hubbard, his contacts, and their demonstrable successes provide a vivid counterpoint to the more lurid stories and failures of the counterculture implementation of psychedelics. Being able to point a calm, professional, and controlled use of these substances prior to the hippie panic could be of inestimable value in the legal battles over psychedelics yet to come.