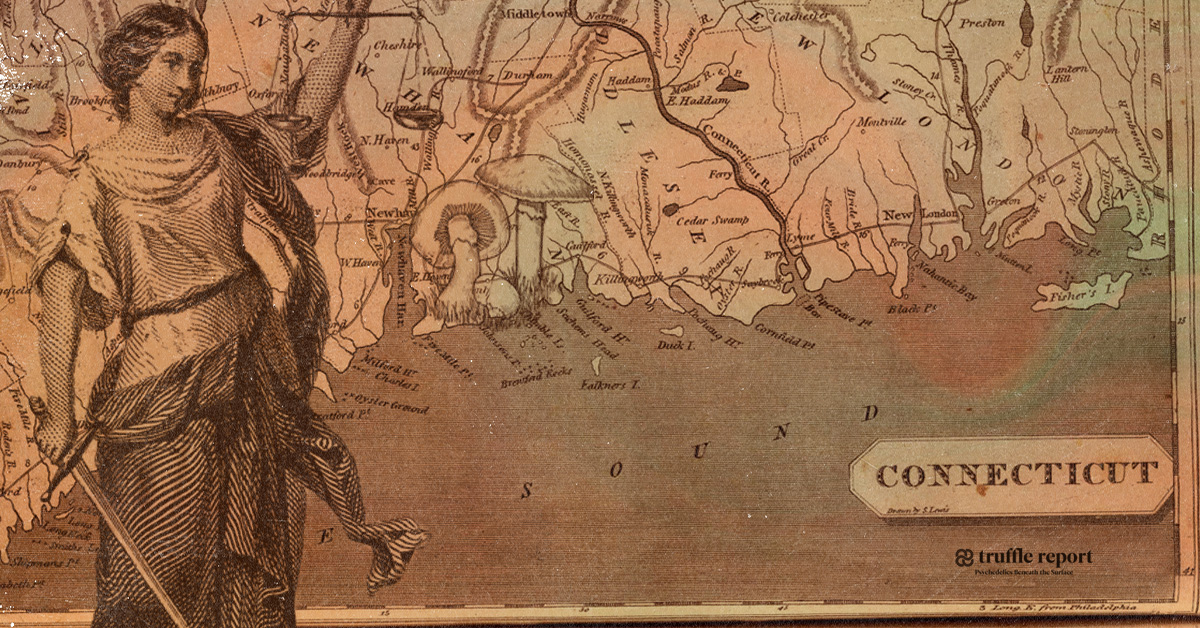 A 17-member workgroup in Connecticut is studying the potential of psilocybin mushrooms for treating mental health issues, with the report due in a few weeks time.

Earlier this year, Connecticut Governor Ned Lamont (D) signed legislation directing the state’s Department of Mental Health and Addiction Services (DMHAS) to establish a workgroup for “an examination of whether the use of psilocybin by a person under the direction of a health care provider may be beneficial to the person’s physical or mental well-being.”

A report on the findings and recommendations of Connecticut’s psilocybin study is due to be submitted to the joint standing committee of the General Assembly on January 1, 2022.

“The workgroup is set forth to come up with a report to the legislature to advise us on what we ought to do concerning the medicinal use of psilocybin and they’ve been working on this for the past month or so,” Rep. Josh Elliott (D), who sponsored bill HB 6296, told Truffle Report.

Elliott adds that the group has been working with real data “for the task force to be moving this to a direction where the report says that we ought to be looking seriously at a full decriminalization model, also encompassing the medicinal use of psilocybin in a controlled environment.”

The Connecticut Psilocybin Study Workgroup —  composed of experts in psychiatry, psychology, members of the DMHAS, state public health, state consumer protection, lawmakers, and stakeholders — is being pushed forward by Washington D.C.-based lobbying group New Approach and local lobbying firm Grossman Solutions. New Approach — an organization committed to ending the war on drugs and funded by strong supporters of psychedelic reform policy such as David Bronner of Dr. Bronner’s — contributed $14,000 to the local lobbying firm for advancing the efforts as per the state filings, CT Insider reported.

Firmly believing in the emerging scientific studies on the efficacy of psilocybin, Ben Unger, director of psychedelic policy for New Approach, tells Truffle Report, “We hope the report reflects the research and the science. We want the report to show how psilocybin helps those in need. In addition, we’re pushing for the report to make recommendations for change, including allowing for some regulated adult access for people in Connecticut that maximizes healing and safety.”

While details of the upcoming report are still being worked out, there are multiple possible paths for the committee to take in legalizing access to psilocybin, including steps comparable to Oregon’s Measure 109, a compassionate care model for palliative patients and veterans, and also the locally-adapted decriminalization model.

“New Approach believes that a policy combination of decriminalization, plus regulated therapeutic access, plus medical access once the FDA approves psilocybin for medical use, provides access to different people at different levels of comfort,” says Unger. “Some people will only use it if they get prescribed by a doctor. Some people will try healing if they have a licensed therapist they can visit, and some people will feel comfortable healing with psilocybin if they don’t face criminal penalties.”

“I’m sure that there’s going to be a very robust conversation in the upcoming session about how to explore the medical implications of psychedelic-assisted therapy and how to answer the questions about getting folks access,” says Jesse MacLachlan, former legislator and Connecticut stakeholder, who is a member of the Psilocybin Study Workgroup.

MacLachlan said that the conversation will continue to be focused on those that need this therapy, like veterans and patients with a terminal illness, while providing them options for care “they need until the FDA [Food and Drug Administration] begins to approve psychedelic therapies for use.”

MacLachlan notes that one of those things that the workgroup is looking at is potentially utilizing the FDA’s Expanded Access Program, as well as a number of other solutions, “like looking at Oregon and trying what we can learn, but the most important thing is how do we create access for those whose lives are in serious danger?”

While the discussion on suitable access models will pick up pace after the report is submitted, Unger says, “We think these models of therapeutic access, decriminalization, and medical access are the best path for psychedelics because it allows people to use them in ways that are going to help promote health and healing. We applaud the workgroup for thoroughly examining the available research and learning about what policies will be best for Connecticut residents. Hopefully, their work means that change and healing are coming.”