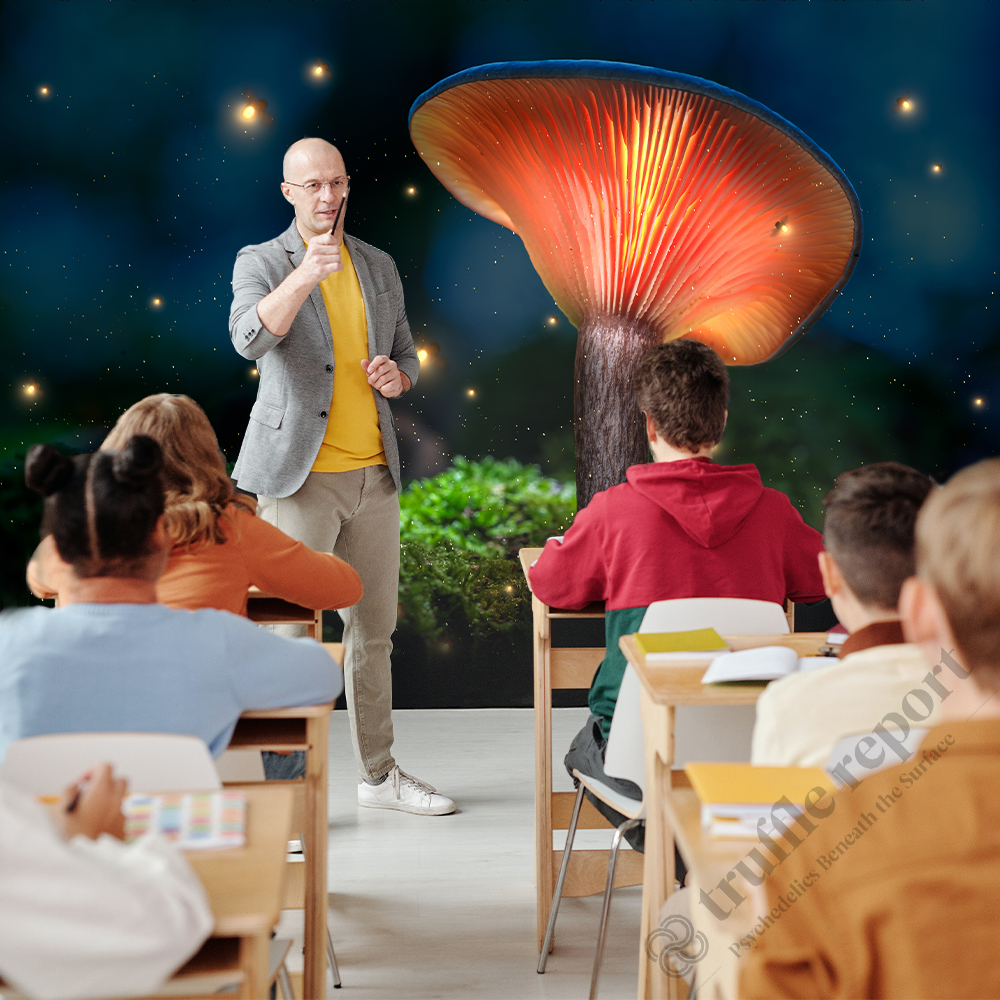 When you read the title of this article, and if you’re of a certain age, chances are that your mind immediately snapped you back to an image of a D.A.R.E. officer lecturing a group of middle school students. D.A.R.E. (or Drug Abuse Resistance Education) is synonymous with contemporary forms of drug education —but its roots, methods, and perils extend much further back in history.

Drug education is important. Sites like Truffle Report, MAPS, or The Third Wave, along with current legal news and business developments, offer links to research and methods for harm reduction. These topics are relevant during the current era in which research and industry surrounding substances like LSD and psilocybin are expanding. No matter where you stand on the issue, psychedelics and other recreational controlled substances are a fact of life. It’s just a shame we keep propagandizing education around them.

The temperance movement began in the 19th century, continued into the 20th century, and gradually began waning after prohibition laws were repealed. One of the core assumptions of the temperance movement was that alcohol lay at the core of most of society’s ills. This gained traction as America shifted from an agricultural economy into an industrial one during the late 1800s, leading to the establishment of large cities with significant rates of homelessness, unemployment, and crime. Concurrent with the booms in immigration and industrialization the country was experiencing, distilleries and breweries multiplied, and temperance advocates blamed alcohol for the changes in their national way of life.

Advocates were largely white Christian women who, at the time, had the socially-prescribed role of teaching children ethics and morality in the household. Subjected to this social pressure, they ultimately felt that they should be allowed to play a role in addressing society’s broader issues with moral behaviour. This led to large protests and eventually a foothold in sobriety education in public schools via the Department of Scientific Temperance Instruction. What actually constituted scientific fact at the time was dubious by today’s standards. The 18th Amendment, which banned the sale and production of alcohol in the US, was passed by 1920 and was bolstered by years of sobriety education.

Here and now, it’s fairly common knowledge that prohibition actually led to an increase in crime. LSD advocate Alfred Hubbard played a role in a bootlegging ring decades before his introduction to psychedelics. After prohibition laws were repealed in 1933, temperance advocates still attempted to discourage the use of alcohol and did so with educational measures that lasted through the 1960s. These focused on scare tactics, Christian values, and notions of patriotism to discourage drinking in students. Their methods included:

Deliberate misinformation played a central role in sobriety education. One handout included a false tale of Benjamin Franklin bemoaning the drinking habits of his work contemporaries and vowing to remain sober. This was completely fabricated, and was demonstrative of the positioning of alcohol in opposition to patriotism and American values.

Misinformation-laden educational films about drug use can’t be brought up without mentioning the cult favourite, Reefer Madness. Released in 1936, Reefer Madness was an exploitation film — a type of movie which leaned into current social anxieties and strong, visceral imagery to gain audiences’ attention. It was originally a church project with an ethical message about marijuana use. Dwain Esper took the project on and included scenes such as:

While these strong scenes were definitely meant to gain viewership, early exploitation films often had educational undertones, and it isn’t hard to see this with Reefer Madness. The film focuses on high school students and exposition is delivered by a high school principal.

It was eventually found by Kenneth Stroup, an advocate for relaxed marijuana laws, in 1972. Because of its campy and hilarious exaggerations, Stroup purchased a copy and ran screenings on college campuses to fundraise for his cause. It became a cult hit, and the rest is history.

D.A.R.E. is the prime example of contemporary drug education. It started as a partnership between the LAPD and Los Angeles public schools, but expanded through the U.S. and eventually gained international traction. For years, D.A.R.E. held a foothold as a respected, well-funded drug education program. Through the 90s and into the 2000s, classes took the form of a lecture between a police officer and students. Over the years, D.A.R.E. and similar programs would use scare tactics, positioning drug use as the result of low self-esteem and an external force from peers that needed resistance (“Just say no”).

Multiple studies found D.A.R.E. to be ineffective at curbing drug use among teenagers, and one study even found that it might increase drug use. Compounding this problem, a lack of genuine information and harm reduction tactics made drug use more dangerous for teenagers who were only taught to avoid the substances on ethical grounds, rather than how to use or deal with them safely. Their public funding took a sharp hit in the early 2000s as a result of the aforementioned studies.

D.A.R.E.’s early efforts mirrored temperance movement sobriety efforts, focusing on scare tactics and ethical values. D.A.R.E. has actually recently been updated in the form of the Keepin’ it Real program. Apparently, former United States Attorney General Jeff Sessions longed for the earlier days of the D.A.R.E. program —you can do with that information what you will.

Another contemporary drug information pamphlet not related to D.A.R.E. reads:

It’s not hard to see how misinformation like this can be harmful in the wrong situation. As psychedelic research expands, hopefully educational programs continue to move in lockstep, keeping people safe as we enter this new frontier.