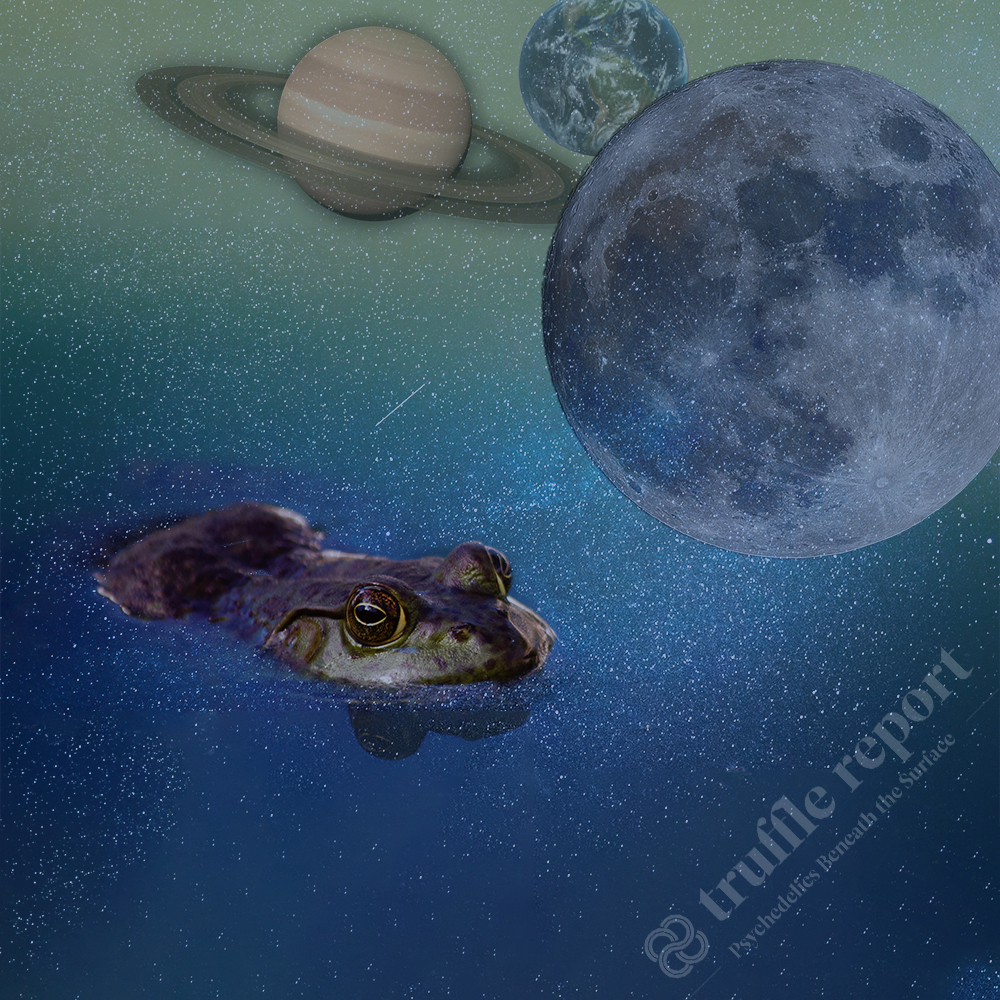 A Beginner’s Guide to Psychedelic Amphibians

We’ve already noted here at Truffle Report that many of the psychedelic alkaloids produced by plants are done so for the purpose of self-defense against would-be predators. While psychoactive reactions are often considered desirable among human users, their disorienting or unpleasant effects can discourage continued feeding habits by predators in the natural world. It makes sense that this same method is employed by small animals for protection—and here, we’ll be discussing amphibians that do just this.

As it turns out, there are a number of toads and frogs that secrete compounds with psychedelic or hallucinogenic effects. Each one has a history, etched into cultures that share their surroundings.

Bufo Marinus: AKA, the Cane Toad

B. marinus is native to the Americas, but it has been introduced to other areas of the world for pest control reasons. In Australia, a cane toad population was introduced in 1935 to deal with scarab beetles — and has subsequently been named one of the most invasive species by the Global Invasive Species Database.

Cane Toads release a milky, poisonous secretion from glands behind their ears as a warding against predators. While this can be lethal to humans, it also contains bufotenine, a tryptamine which can have hallucinogenic effects in large enough doses. Accordingly, there are some who would rather not see the cane toad population diminish, despite the Australian government’s best efforts. Consuming cane toad secretion was made illegal in Australia during the 1980s, which is probably for the best since it contains varying concentrations of bufotenine and other, more dangerous ingredients.

Cane toads have also seen another, more sinister use back in one of their original habitats. Haitian myth and lore often references zombies, and there exists real “zombie’s powder” supposedly used by sorcerers, or bokors, to create undead servants. Several of these powders were analyzed, and the most common ingredients were found to be puffer fish (containing the paralyzing tetrodotoxin); human remains; hyla tree frogs (used as a skin irritant), and our old friend the cane toad.

The Sonoran desert toad, found exclusively in the American southwest, produces venom in a similar manner to its cousin, the cane toad. They also secrete an enzyme known as O-methyl-transferase, which converts bufotenine into the extremely potent psychedelic: 5-MeO-DMT. The consumption of this secretion, dried and smoked, has been employed by shamans in Mexico and the United States for many years and has recently seen a massive surge in popularity among recreational users. 5-MeO-DMT is considerably stronger than DMT —and when the toad venom was taken in a ceremonial setting, a Johns Hopkins Medicine study noted, around 80 percent of participants described a therapeutic reduction in depression and anxiety.

The Sonoran desert toad’s popularity has resulted in some unsavoury practices from harvesters in order to obtain this valuable venom. Unlike the cane toad, which currently has a difficult-to-control population, the Sonoran desert toad has a much more limited population in a smaller region. As their venom becomes more popular, they may end up on the endangered species list, a move which conservationists are currently petitioning for.

When being collected, they are removed from their natural habitat and jammed into bags. Once collected, their venom is over-extracted. Altogether, the practice of collecting this natural source of 5-MeO-DMT can be quite cruel. Conservationists are urging users to make use of synthetic 5-MeO-DMT instead in order to curtail these practices.

The giant monkey frog is found around throughout the Amazon Rainforest in South and Central America. Among its unique characteristics is the waxy secretion that it produces to prevent its flesh from drying out in the sunlight. This secretion also contains a cornucopia of peptides —short-chain amino acids —many of which act as opioid agonists. Combined with saliva or water, this wax is the main ingredient of kambo.

Applied topically to skin burns, kambo has been used as a hunting aid by many indigenous communities throughout the Amazon, including the Ashaninka. Though its effects are initially purgative (vomiting and diarrhea), past this phase it enhances tactile sensations and creates strong mental focus. Unlike the venomous secretions of the cane toad or the Sonoran desert toad, kambo does not produce any hallucinations on its own, but it is said by communities like the Ashinka to dispel accumulated negative energies, known as “panema”.

Kambo is proving to be extremely versatile in medical research. As mentioned, it comprises a unique formula of several bioactive peptides —many of which are proving to have powerful medical potential when isolated. Dermaseptin B2, for example, has proven effective at slowing cancer cell growth and fighting off a broad range of pathogenic microorganisms. Phyllokinin may be useful in treating high blood pressure.

Currently, the population of the giant monkey frog remains stable even as interest in kambo has increased. Hopefully, this remains the case as kambo’s medicinal utilities are studied further.

Update 13/05/2021: For more information on psychedelic fauna, check out Truffle Report’s The Mystery of Psychedelic Ant Visions and Fish and Trips: Psychoactive Denizens of the Deep